When folks turn panicked we see the down volume soar to 90% of the total. Monday saw, almost the entire day, up volume over down volume and by the end of the day the up volume swamped down volume by about 2 to 1. That's a bunch considering the S&P was flat on the day. Thus there is no way we can call Monday panicky.

Yet folks are turning more cautious as the moments go on. How can we tell? For starters the put/call ratio zipped up to 126% intraday and even though we rallied into the close it remained high at 117%. The 10-day moving average is not quite where I think it ought to be for this sell-off to be considered done yet (it should be higher) and my guess is it gets higher as the week wears on.

I can also tell that folks are gravitating toward more caution because two weeks ago the CNN Fear and Greed Index was at 52 and now it is at 29. Typically under 20 and we've moved to Fear. So while it is not yet extreme, the point though is that it's pretty much halved in two weeks so we know caution is creeping in.

The number of stocks making new lows did contract. Last Thursday there were 426 new lows and Monday there were 332 new lows. That's actually an improvement and a minor positive divergence. The Hi-Lo Indicator did not move as much as it has been plunging. It is now at 20%. A reading under 15% means we are oversold. 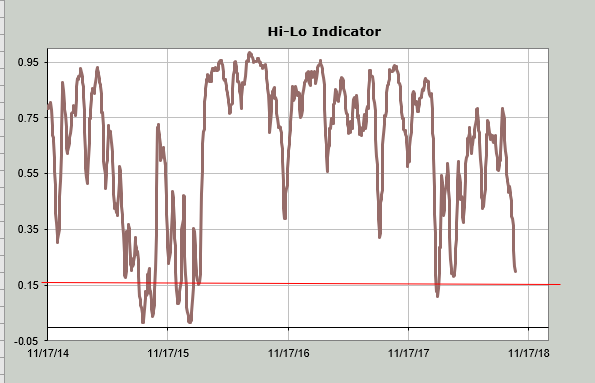 Then there is the 30-day moving average of the advance/decline line. It is oversold; it will be maximum oversold by the end of this week.

What we really have continues to be group rotation. Only now the rotation has been out of the high-flying tech stocks and into some of the down and out stocks.

Finally I want to touch on the Utes. Ever since interest rates on bonds broke out in early October the Utes have been on a tear. That is highly unusual. Typically if bonds go down Utes go down too. Even though I think the Utes are a bit over extended right here, It makes me wonder if my call for a bond rally this week is more solidified. After all, maybe the Utes are telling us the bonds really are oversold.

The one thing I do know is that if that downtrend line gets crossed others might just take notice of the Utes. Maybe the bonds will even notice!