When asked what my favorite car of all-time is, my answer has been the same for nearly 40 years. Since my teens, I have always liked the looks of the Pontiac Trans Ams of the late 1970s. Even if I see one around to this day (there is currently one at a used car lot near my home), I'll take notice. If in good shape, I'll point the car out to my kids, as if they care. If I see one that has aged poorly, and occasionally I will... I might add how if retired, I would love to grab the car at a discount and take my time fixing it up.

If asked about the stock market by someone who does something else for a living, I would probably say that equity markets are still in an uptrend. From afar, still a beauty. I would also add that the uptrend was under pressure. Not so pretty upon close inspection. The broader equity indices did bounce on Monday (Psst... they bounced on Friday, too.)

How sickly is this market? That all depends on one's viewpoint, and how well diversified one is. Discipline! The S&P 500 had been stopped at the 2890 (ish) level on Friday afternoon, and was stopped dead in its tracks there twice yesterday. The Nasdaq Composite, tech laden as it is, has run into resistance at a lower level on every rally going back to last Wednesday. Tech is sick, and seeing why is not too difficult.

True, I usually do not hesitate in my criticism of central bankers. Yes, we can probably blame the Fed if the yield curve should invert, and we head into an economic recession. But no, we cannot blame the Fed for seeking normalization of monetary policy, just in the method of said pursuit. We should see as normal, the condition of a reversion of the impact that the ultra-loose, and grossly irresponsible policies of a lost decade had upon equities.

The forced perversion of price discovery benefited the tech sector perhaps more than any other. Value investors were left in the dust, as growth became the fastest, and at times the only path for investors to accumulate wealth in the equity marketplace. Throw in the current trade conflicts, in a global economy where much of tech has become dependent upon foreign supply chains, and foreign revenues, and that investor is left -- even with the recent selloff -- with a portfolio of discounted stocks, that are probably still trading well above net basis.

The uncertainty of that situation alone provokes few to add, but many to take profits. Few are willing to watch large gains become small gains, or losses, unless they have large gains elsewhere that allow them to remain patient.

Ever got yourself into a fight (when you were much younger), and then realized rather quickly that the other guy might just be pretty good at this sort of thing? No fun. No fun at all. To translate... global growth is slowing -- just ask the IMF. As usual, that organization is out and about this morning, warning us about what every single one of us had already figured out months ago.. but thanks for showing up. Enjoy the shindig this weekend.

Input costs are rising. That is becoming visible everywhere. U.S. Treasuries are currently up against a fairly sharp selloff, forcing yields toward multi-year highs. This has forced the tech rout that we have been talking about... focused on semiconductors and software, despite rising business spending. That spending means to me that these industry groups will be fine once they find their level.

The semiconductor names that appear grossly undervalued can revert to their cyclical nature. Micron (MU)   and Intel (INTC) come to mind. Advanced Micro Devices (AMD) is a little trickier, unless they have actually captured greatly increased market share. Nvidia (NVDA) is different, and acts more like a cloud name. Investors in semis can at least understand their playing field. How to value the cloud names such as Adobe (ADBE) , Salesforce (CRM) , ServiceNow (NOW)  and Splunk (SPLK) in this market will be a little more difficult to figure out for sure.

Channeling my inner Douglas Kass, I simply shake my head at the constant drumbeat of first-level thinking, and I hardly think of myself as a deep thinker. That means that these uninitiated new-age financial types are either looking at simplified material, or being forced to keep it at a certain level by their own legal departments. Probably the latter, which is one reason why I decided to work for myself in the first place.

Some folks point to the financial sector, as the banks should perform better than they have at higher interest rates. That is true, but just one surface level ingredient. What traditional bankers need within this one business line is twofold. First, they need what is known as net interest margin, or the gap between what they pay and what they get paid. (The difference between short-term rates and long-term rates).

Secondly, the banks need to see loan growth, both at the corporate and personal levels. Higher short-term rates, not correlated with higher long-term rates (what we've had until recently) actually drain the banks of potential profitability. We are not even close to what the banks need at this point.

Those banks start reporting later this week. You'll hear from the likes of JP Morgan (JPM) , Citigroup (C) , Wells Fargo (WFC)  and PNC Financial (PNC) on Friday. There is a reason why, with the S&P 500 trading at 16.9x forward looking earnings, that the banks in general are mostly valued at 11x or 12x. There is a reason why, with Q3 revenue for the S&P 500 expected to print at somewhere between 7% to 7.5% year-over-year growth, that expectations for the financial sector are down around 3%.

It's no secret that my two favorite cloud names are Adobe (ADBE)  and Salesforce (CRM) . In fact, I just added to my ADBE long yesterday. Don't love that chart, just needed to increase exposure in order to keep in balance with my CRM long (discipline!), and did so at an extreme discount. Remember, I do everything incrementally. Let's take a look at the two of these stocks, shall we? 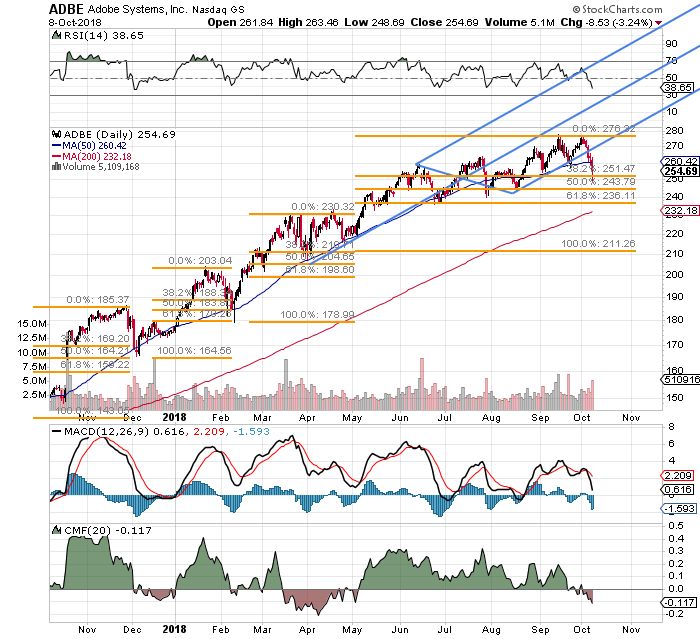 Adobe has run into some trouble here. Double top at $276. My Pitchfork model obviously broke last week. The daily MACD, Relative Strength, and Money Flow have all turned against. The positive? This name has made a habit of finding support at retracement levels of 50%.

If ADBE were to repeat that pattern on this selloff, the support shows up at around $243. If one is brave enough, sizable premiums are being paid for significantly out of-the-money puts in this name. I am short some myself, but this is dangerous, as we don't know where and when the level of fear in these seemingly "growth" type stocks will either subside or spike. I cannot recommend a derivative position of that type at this time for the retail investor without understanding the individual's personal tolerance for pain. 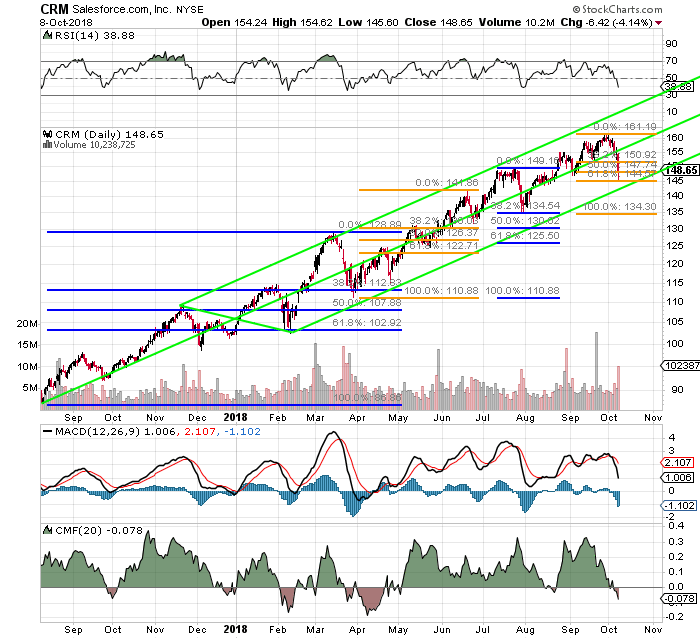 This cute little guy is in better shape, at least technically, than it's chief competitor. Yes, the daily MACD, Money Flow, and Relative Strength have all turned against the name -- but as you can plainly see, my Pitchfork model that dates back more than a year remains unbroken.

Although this name typically finds support at retracement levels of 38.2%, this selloff has forced us to look at 61.8% as the spot.. which worked yesterday. My target price for this name remains $170. You may recall that my panic point for CRM has been $140. At this point, I am more likely to add small there than I am to sell, but treat that subject. When fists start flying, I am no different than anyone else.

Get an email alert each time I write an article for Real Money. Click the "+Follow" next to my byline to this article.
TAGS: Investing | Global Equity | Regulation | Markets | Economic Data | Earnings | Economy | Newsletter | Politics

U.S. Inspections of Chinese Listings Due to Start Next Week

With inspectors winging their way to Hong Kong, the first test will come on a deal to allow SEC access to the books of Chinese companies listed on Wall Street.

Hong Kong would become the fulcrum in a system to keep Chinese companies listed on U.S. markets.

Sorting Through Exchange-Traded Products, We Find a Carbon Credit Play

Let's look at what an ETN is and then get into a type of ETN that has been working for investors so far this year.