Friday did not see the VIX get jumpy. Yes it lifted, but it's still not quite what I would call jumpy. Friday's volume was lighter than we've seen and only about 60% of it was on the downside. Then there is the headline that greeted me Sunday afternoon: Why Monday may offer a respite for stock-market investors after a bruising bond rout.

So if there was panic on Friday, it was not evident using these measurements.

We also have the breadth of the market. It has been red for eight of the last 10 trading days. That means the Overbought/Oversold Oscillator is oversold.

I feel compelled to tell you that Nasdaq's oversoldness is not as compelling; it gets much more compelling a week from now.

Using the McCellan Summation Index which has been in a downtrend for months, we find that it will now take a net differential of +3400 advancers minus decliners to halt the slide. That's into oversold territory as well. At +4000 it is extremely oversold.

We did see a small contraction in the number of stocks making new lows as well. There were about 30 fewer stocks on the new low list Friday than Thursday. I'll call that a minor positive divergence. This has helped the Hi-Lo Indicator to come down to 22%. I find that under 15% and it is very oversold. I honestly don't know how to estimate "when" we would be under 15% but suffice it to say it ought to be there this coming week. 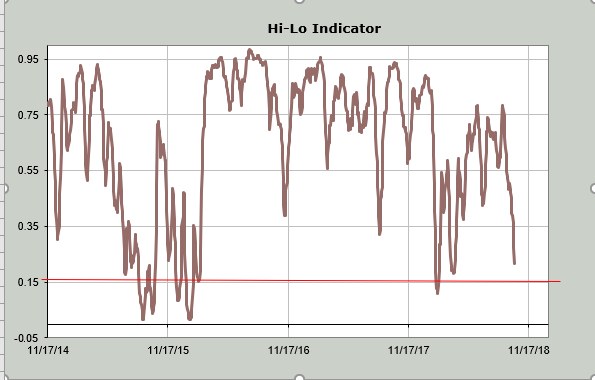 Now let's take a look at the chart of the Russell 2000, where the bulk of the selling has been since June, and most notably in the last six weeks. Not shown on the chart is the 200-day moving average which comes in around 1620, where it bounced from Friday. But more importantly look at the chart. What's missing? An oversold rally to create the right shoulder of a head and shoulders top.

Either that or a gap down and break that does create the missing panic, the missing jumpy VIX and the missing high volume. Obviously the former is bearish and the latter is more bullish.

The Action Today Has Been Another Change in Character

The stock picking is spreading to some of the small-cap values.

MOS has the ability to produce and deliver two vital crop nutrients on a massive scale.