Stocks are lower Columbus Day morning, but on Friday night our own Jim Cramer on his Mad Money program said it's not too early to begin thinking about what to buy when the selling subsides. Cramer said a company by the name of Guidewire Software (GWRE)  was becoming an intriguing story as it transitions to the cloud and subscription billing in the insurance industry. I don't pretend to know anything about that business so let's explore what the charts and indicators look like on the name.

In the daily bar chart of GWRE, below, we can see an uptrend from early December. Prices rallied from around $70 to over $105 but is looks like a manageable correction is under way. Prices have closed below the rising 50-day moving average line but are above the bullish 200-day line which intersects around $88. The 200-day line was successfully tested in December, February, early March and late July.

The daily On-Balance-Volume (OBV) line shows a positive trend from early December until early September. A rising OBV line happens when the volume of trading is heavier on days when the stock closes higher and this is a sign of aggressive buying. Now the OBV line is weakening and this signals profit taking and liquidation.

The Moving Average Convergence Divergence (MACD) oscillator is pointed down and could soon cross the zero line for an outright sell signal on this time frame.

In this weekly bar chart of GWRE, below, we can see that prices have more than doubled from early 2017. Prices are trading above the rising 40-week moving average line. The weekly OBV line was rising from early 2017 to May of this year after which it has softened.

In this Point and Figure chart of GWRE, below, we can see the rally and a possible downside price target of $89.62. 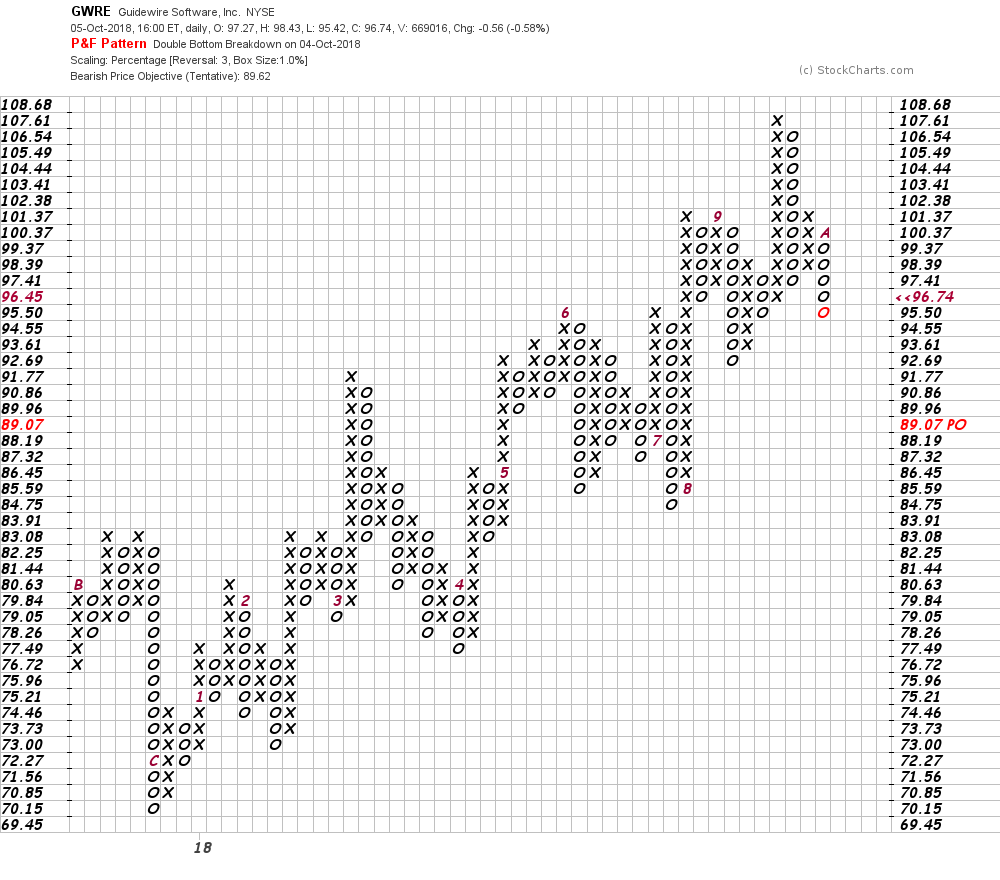 Bottom-line strategy: GWRE has some chart support beginning around $95 and layered down to $90. A Point and Figure target of $89.62 may not be reached if buyers find the pullback already from the September high enough.

Investors and clients of financial institutions like well run firms. Here's what to avoid.