Not even taking into consideration that wonderful kid that keeps staring back at you in the mirror, it's getting a little ugly. Though October has only been with us for five trading sessions, the Nasdaq Composite now stands down 3.2% month to date. The Russell 2000? -3.8%. Yes, after Thursday and Friday, both the Dow Jones Industrials and the S&P 500 are down for the month, as well.

Especially badly beaten last week were the Consumer Discretionary stocks, with the focus on multi-line retailers. Although this group did seem to rescue itself over the past couple of quarters, but now it seems to be the next group to sputter -- after housing, the autos, the airlines... You did notice last week's numbers released by Reis showing mall vacancies at their highest level since 2011, and mall rents in decline, right?

Do we even get started talking about Information Technology? You may have noticed the Technology Select SPDR ETF (XLK) close below it's 50-day simple moving average on Friday, but did you happen to notice where the iShares PHLX Semiconductor ETF (SOXX) went? That one made short work of both the 50-day and 200-day SMA, closing the week well below both of them. Ugly is the word, but does it get even worse? Let's explore.

Not only has the Fed Chair sounded hawkish, he seems quite comfortable with it. Markets are finding this a bit scary, so they let a little air out the tires on the long end of the Treasury curve, not to mention equity markets. In fact, according to some JP Morgan research already making the rounds this morning, Chair Powell's post-FOMC announcement press conferences alone have cost U.S. equity markets up to $1.5 trillion in aggregate value.

You already know, if you read me, that I have been openly pleading with the Fed to cool it for a month or two, while markets adjust to the impact of removing $50 billion worth of potential liquidity from the economy each and every month.

That increased level of quantitative tightening starts right now. The number is comprised of $30 billion worth of Treasury holdings, and $20 billion worth of mortgage-backed securities -- and it's not quietly running in the background. S&P 500 forward-looking valuations have fallen from 18.3x earlier this year all the way down to the 16.9x -- where they stood this weekend, according to Yardeni Research.

This rather sharp reduction in forward-looking valuations, which brought today's valuations nearly in line with their longer-term averages, has been camouflaged by outstanding macroeconomic performance, stand-out earnings growth, and a scarcity of available shares brought about through corporate repurchase programs.

I have told you that over the last quarter of the year that I will be using rallies to enlarge my cash position. I am not running for the hills, and like some more famous traders, I reserve the right to change my mind on a whim, but that's how I am thinking right now -- unless this Fed Chair shows me that he "gets it."

You do realize that the whole decade or so that central banks were easing policy, that equity and debt performed well side by side, right. So, what did you think would happen?

As China came back from the "Golden Week" holiday, the PBOC announced that it would reduce the Reserve Requirement Rate (RRR), or simply the amount of reserves that commercial banks are required to hold, by 1%, starting on October 15. This supposedly will free up 1.2 trillion yuan, or close to $175 billion, in U.S. currency. This had the effect of weakening the yuan versus the U.S. dollar, and is intended to stimulate the sagging Chinese economy.

For those keeping score, this is the fourth such cut made by China's central bank this year. In response to these moves, traders in Shanghai sold Chinese equities aggressively. At last glance, the Shanghai Composite was off more than 3.7% response.

Then there is Italy. No doubt in my mind that some of the selloff at the long end of the curve in the U.S. last week was based on a perception that Italy would avoid crisis. This morning, yields on Italian sovereign debt have once again spiked, with that nation's ten-year now giving up more than at any point in the last four years.

Don't forget the ECB's plan to wind down their quantitative easing program is still slated to reach the zero bound by the end of the year. On top of that, the ECB's re-investment plan, at this time is slated to focus on higher-quality sovereign debt -- such as German debt -- over that provided by more-troubled economies. I have my doubts about this plan running smoothly. U.S. bond markets are closed today for the bank holiday.

I would imagine that some of this safe-haven value might find it's way back into those markets if Europe is not on board with the latest version of the Italian budget. That would make pushing upward on short-term U.S. rates that much more dangerous. You kids at the FOMC getting this? Hello. Is this thing on?

Questions You May Have Wanted To Ask

In recent days, I have been asked two questions by retail investors that I thought I should address. The first one was simple. I was asked why I have not written about any airlines in recent memory. The answer here is simple. I mostly write about trades that I am implementing myself, or at least considering, but may not have room on my book without moving other items around. I have just not been crazy about the airlines in a good while. While I have not recently held shares of any airline specifically, and have geared my Transports allocation toward the rails this year, I always maintain a long position in the SPDR S&P Transportation ETF (XTN) as one of my core positions as a mild hedge, just in case my other choices in this space backfire.

Fortunately, as commodity prices, rise -- and more specifically , as oil prices rise -- what is seen as higher overhead for an airline is also seen as more highly valued cargo, and in a growing economy... there is greater demand for such cargo. This is a tailwind for the rails, for the truckers and for maritime shippers. 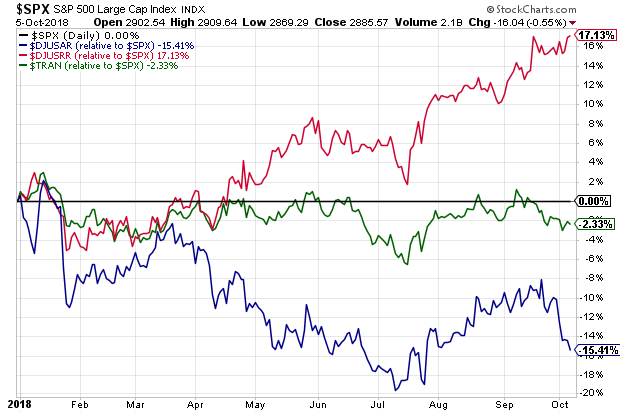 What I am trying to demonstrate here is the performance of the Dow Transports in aggregate versus the S&P 500, using the S&P 500 as a base adjusted to zero. So, the Transports, year to date are under performing the S&P 500 by 2%, even though the DJTA is up 5% for 2018. Get it?

Now separating the Dow Jones U.S. Railroad Index (DJUSRR) from the Dow Jones U.S. Airline Index (DJUSAR), the stark difference in performance between the two becomes apparent to even the untrained eye. My longs in this space are CSX Corp (CSX) , which I have held since 2017 and is at +40%, and Union Pacific Corp (UNP) , which I have held since July +19% .

If I were to add another rail to these holding at this stage of the game, I would look most closely at Kansas City Southern (KSU) , Canadian National (CNI)  and Canadian Pacific (CP) , due to the obvious benefit likely to be experienced by these three rails in the wake of the recent NAFTA redux (known as the USMCA).

(KSU is currently priced at a cheaper valuation, but the Canadian rails operate at higher margins.)

The other reader question was on managing risk, and how to be agile in doing so. Many of you have commented on my use of the sale of options to raise revenue and drive lower my net basis costs on my long positions. Someone asked if I change this tactic, do I become less confident in the direction of the broader indices. The answer is absolutely, I do.

It is at times like this, when the Fed is being rough on markets, that you will notice me sell puts with discounted strikes without taking any equity stake in names I like. Close followers know that this is how I have approached both Apple (AAPL) , and Advanced Micro Devices (AMD) .

Even in conjunction with my long equity positions, if I do write put options, I will be much more likely to accept a lesser premium for a strike way out of the money than to risk getting smashed in the nose by Mr. Market. I will also increase my writing of calls as a part of my scheme for reducing basis, as I cut back on the shorting of puts. In short, yes... if you play this game, focus and agility are key parts of adaptability, and adaptability is how one survives in this sport.