(This commentary originally appeared on on Friday on Real Money Pro. Click here to learn about this dynamic market information service for active traders.)

According to Technical Trading 101, for optimal results, trade with the trend. Therefore, when in a bull market, net long is the correct position.

What makes the most sense after reaching a series of all-time highs: adding to long positions, or lightening up? With rare exceptions, the preferred action is to take something off the table.

How can we accomplish this? First, differentiate between stocks that are meant for the long haul vs. those purchased for a trade. Then go through your short-term positions and search for:

1) Stocks that have underperformed or failed to perform.

The first group is the easiest to pare. If a stock isn't performing in the current bull environment, ask yourself if it should be performing. In other words, if the stock is defensive in nature, such as a consumer-staples stock, underperformance in a bull market should not come as a surprise.

This is the case right now. The S&P 500 has closed at six consecutive all-time highs, yet the chart of the S&P Select Consumer Staples SPDR (XLP) looks terrible. XLP has formed a massive head-and-shoulders pattern that has been developing for the past eight months. The sector could break down at any time.

Once we have weeded out the underperformers, the second type of stock to search out are the ones that have outperformed. Again, we are talking about stocks that were purchased for trades, not long-term holdings. 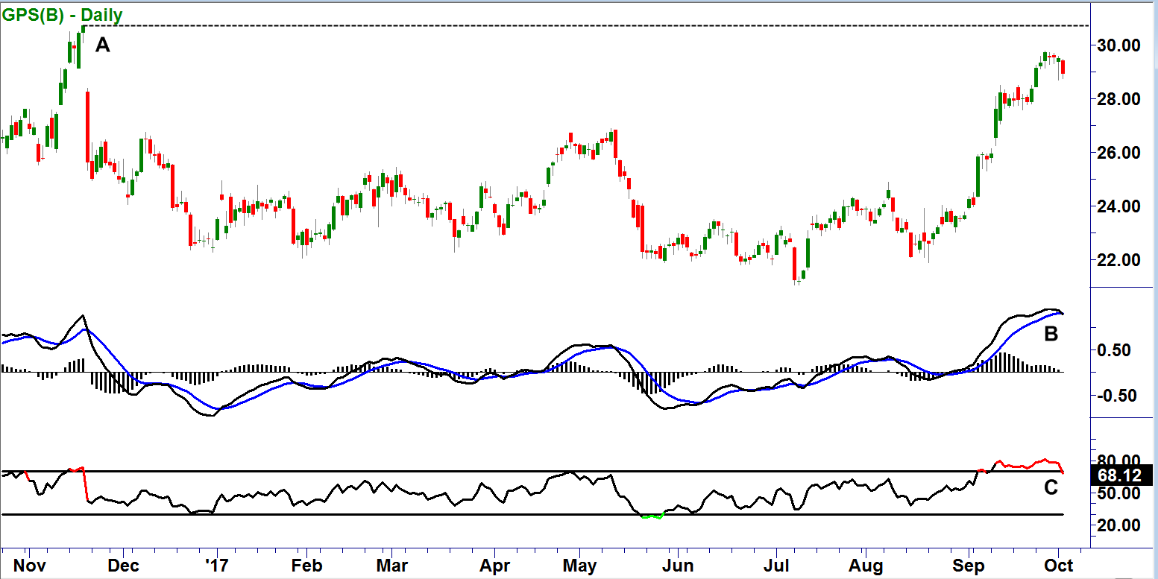 Gap's chart is giving traders three reasons to take some shares off the table. First, the stock has heavy resistance just ahead. The last time the stock traded near its current price, it fell sharply after climbing to $30.71 in November of last year (point A).

Gap also received two sell signals earlier this week. The first was from the stock's MACD (moving average convergence divergence) indicator (point B), and the second was from its RSI (relative strength index) indicator (point C). Both indicators tell us Gap is overextended and likely to pull back.

This doesn't necessarily mean you should close your position entirely. However, because Gap shares have appreciated, the stock may make up a larger percentage of your portfolio than originally planned. If this is the case, trim some shares so that the position size is consistent with your original plan.

Get an email alert each time I write an article for Real Money. Click the "+Follow" next to my byline to this article.
TAGS: Investing | U.S. Equity | Consumer Discretionary | ETFs | Funds | Consumer | How-to | Markets | Stocks

Will Apple Prove to Be Hardy Stock or Just Low-Hanging Fruit?

A look at shares of the market and tech bellwether as the broader averages comes are under selling pressure.