Cimarex Energy (XEC) has almost doubled from its January 2016 low of $72.77 and in the long and steady climb corrections have been relatively shallow and short-lived. Can this kind of out performance continue? Let's examine the charts and our favorite indicators.

In this daily chart of XEC, below, we can see the relatively quick turnaround in the $90-$75 area early in the year. Prices turned up strongly and did not dip more than $10 until late April. There was a three-month consolidation in May through July before another smaller leg higher in August. After another pullback in early September, XEC came roaring back to post another new high for the move up.

Prices are above the rising 50-day and the rising 200-day moving averages. The On-Balance-Volume (OBV) line has risen steadily from its January nadir and just made a new high along with prices showing the kind of confirmation chartists love to see. There is a small "but" in that a bearish divergence between the higher price highs in August and October have lower momentum highs. Bearish divergences are not immediate sell signals but should be considered a "heads up" that the pace of rally is slowing.

In this weekly chart of XEC, below, we can see the bigger picture, both the strong rally to $150 by July 2015 and the 50% correction around $75 by January 2016. XEC's recovery has put it within striking distance of the $150 zenith. XEC is above the rising 40-week moving average line. The OBV line on this weekly timeframe is bullish. Similar to the daily bearish divergence, this chart shows prices vs. the 12-week momentum study. Momentum peaked in May and despite price moving to a new high momentum has made a lower high.

We have included this Point and Figure chart of XEC, below, to show the recent breakout to a new high and a long-term price objective of $181. Price objectives from a Point and Figure chart are derived by counting the columns across a congestion or consolidation area. Because this is a 1X3 chart pullbacks or reversals smaller than $6 area ignored. To adjust for this lack of information/price discovery a horizontal count of columns is then multiplied by three (3) to come up with a price objective that is projected upward from the breakout point. RM readers can find out more about this charting technique here. 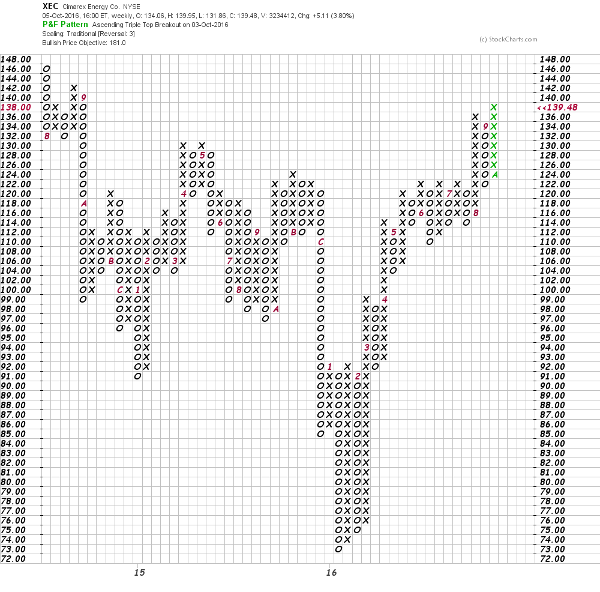 Bottom line: While a picture of slowing momentum keeps us on alert, XEC is in a clear uptrend and resistance in the $140-$150 area dates back to 2014 and might not present much of an obstacle at this point. A decline below $120 would upset this bullish outlook.