I am going to go our on a limb here and guess that most people reading this piece have at one or another point in their lives been sucker-punched. Maybe some of you have even thrown one. If you have ever been in reception of one of these wonderful gifts, and not been knocked completely out, then you know. It takes a few seconds for one to realize what just happened. Hopefully you have friends and will have time to collect yourself. Now, you are one one knee, a little (or a lot) dazed and you're not sure that you still have all of your teeth. The teeth by the way, will hurt for days, even if all still sit in place.

This, my friends is what happened to our marketplace late Wednesday. The shock carried through most of the session on Thursday, as traders witnessed both very strong macroeconomic data, and a Fed Chair that felt the urge to remind us that he believes short-term rates are not close to where he feels the neutral rate might be. Great. Another kook searching for UFOs. Just so you know where I stand... I think credit should be priced like a commodity. Need to borrow funds? There's a price. Have funds to lend? Charge a fee.

The free market is the right answer, in my opinion, to almost all questions. Inefficient at times in the short run. Much more efficient over longer timelines. Honest price discovery driven by interest on both sides. This is why I was such an opponent of quantitative easing in the first place, and also why I don't like quantitative tightening much more than I did the easing. Artificially enforced conditions of supply and demand are still just that "artificial" .. whether dressed up as policy or not.

The Fed saved us from a Depression, you say. The Fed forced all of us to live like we were in a recession for 10 years, I say. I know there are other opinions out there, and that's fine. I will never be in the majority, because the majority will always take the easiest, and quickest, route.

All that said, we are still walking down a tough street in a bad neighborhood, and we will be for a couple of days. Maybe longer. U.S. Treasuries are wobbling. The 10-year note hit support on Thursday precisely at the level we discussed pre-opening in Market Recon (3.22%). That is also where that same 10-year paper has been scraping along all night. What happens should we see this level crack and then survive at least one test? Doubleline Capital's Jeffrey Gundlach (who I think is really, really smart) points toward 3.5%. Personally, I think it gets worse than that. In my opinion, it really won't take much to force the 10-year to yields approaching 4%. First though.. the re-test.

It's not like today is Jobs Day, or anything. Keep in mind that September jobs will be impacted by Hurricane Florence, which means that markets may overreact to less meaningful data today. On top of that, the U.S. Treasury will go to market with $23 billion worth of 10-year notes this coming Wednesday. The size of these offerings is growing, and the buy side is adjusting to the federal government's increased demand for credit. The price of credit has no choice but to be impacted negatively for borrowers by the forces of deficit spending. That is part of the environment now. Get tough or get lost.

Fear Is for the Wicked

As I have tried to express to you, the folks I care about -- because I do care, and I know you hurt -- remember this. Remember it all of your life. The environment provided is fact. It is not to be feared, but instead used as a tool. Understand where you are. Once you understand the playing field, then you can identify what needs to be done.

Identify what? One -- potential threats against. Two -- targets of opportunity. This requires honest evaluation. Once you Understand, and Identify, then you can Adapt. One needs to be willing to adapt to all things. Welcome all challenges. Fear absolutely nothing. Only the wicked shall fear, for we are not the wicked. Turn your fear into hunger. Finally... once you have understood, you have identified, you have adapted, and you have learned how to manipulate your own fear... that's when a trader, no... make that an adult. That's when an adult will have the self-inspired confidence to overcome.

Just a thought while I was covering artificial conditions that pervert honesty. There's still no pace for the DH Rule in baseball. It's simply impure.

I don't know how closely some of you follow me. If you avidly read what I write, then you know that I have generally been a supporter of Micron Technology (MU) for some time. Last week, I sold my equity stake. Not because I really wanted to, but when one plays the game in the way I do, one exposes him or herself to the risks of both having shares called away, and having shares put to you. Well, I was called away. Thanks to all of the premiums collected over many months, I actually took a profit in the name. I still want to be long, though.

This is something that I think a lot of retail traders miss out on. We call it taking scalps in the business. Yes, there are times that this creates danger. For instance, late yesterday when the market turned, suddenly options premiums on the put side seemed overvalued to my naked eye -- and I acted, before the algos could take the prize away.

So, I come into Friday expiration short out-of-the-money Amazon (AMZN) puts that expire today. Risky, yes. Might also be considered easy money if they don't crush that name today. If they do, well, I have to be prepared to pony up for the equity, but at least it will be at discounted price that I have chosen, and been paid to accept this risk at my price.

Gang, you would not believe how much one can whittle down a net basis price on an equity position through the sale of related options. And for those new to options trading, selling a call against a long equity position of correlated size does nothing to increase risk to principal. 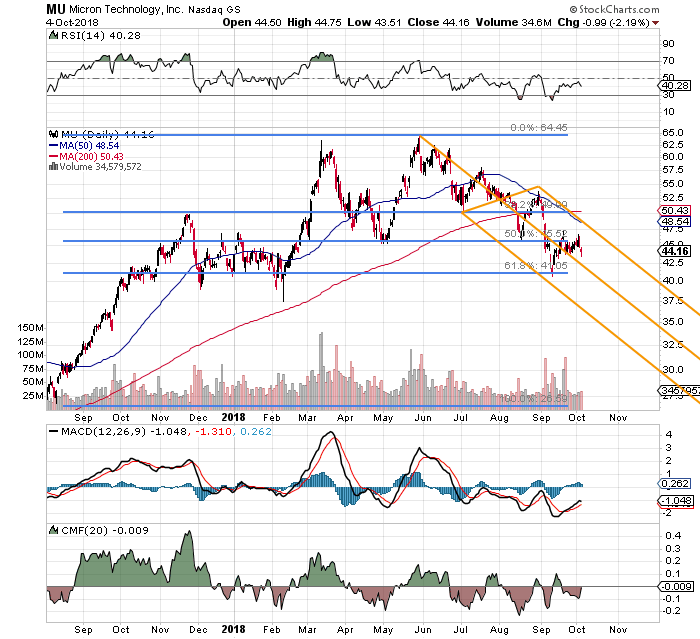 First off, I am already short $44 MU puts that expire tonight, so if Micron has a lousy day, I don't need to act in order to start rebuilding my equity stake. So, let's take a look at this stock. Obviously tech was under pressure, yesterday. Obviously the semiconductors have been under more pressure than the rest of tech for some time. Maybe not so obvious are the facts that MU is less exposed to weakness in NAND pricing than, say, their competitor at Western Digital (WDC) might be. MU is really more exposed to DRAM pricing, which is preferable at this time.

Traders should not take heart in the fact that the name trades at just 4x next year's projected earnings. That and $2,75 will get you a ride on a New York City bus. What traders should take heart in, is the fact that the firm is buying back $10 billion worth of these shares. CEO Sanjay Mehrotra has put the firm in the foxhole next to you. Artificial scarcity you say. Hypocrite you call me? Understanding the environment, I say.

--Prepare to add another 10% to 12% on any approach to the 61.8% retracement level that had already been successfully defended in early September.

Assuming an entry level position of 100 shares, and the sale of one contract on each side, the trader will lower initial net basis cost from $44.16 to $42.19. Micron reports on December 17. The risks are that either profit will be capped by being called away at $52.50 by then, or that the trader will be opening him or herself up to having to average down at $37. Both outcomes I find attractive. If the shares stay between $37 and $52.50, the options expire, and the trader is free to play this game all over again, further reducing net basis. See how that works, gang?

Get an email alert each time I write an article for Real Money. Click the "+Follow" next to my byline to this article.
TAGS: Investing | Global Equity | Regulation | Markets | Technology | Economic Data | Earnings | Economy | Newsletter | Options | Politics | Risk Management