Automatic Data Processing Inc. (ADP) has gotten a lot of media attention ever since Pershing Square, a.k.a. Bill Ackman, announced this summer its investment in the company. You don't have to be an accomplished technical analyst or chart reader to see how volatility and volume has increased (chart below).

It can be hard sometimes to be involved with a stock or to analyze a name that can move sharply on an unanticipated press conference or press release but that is the environment surrounding ADP today. Let's examine the charts and indicators on ADP to see if we can plot a logical course for the weeks ahead.

In this daily bar chart of ADP, above, we can see that prices made a large ascending triangle formation from December to July. Prices broke out on the upside of this triangle in late July but quickly declined back to the break out level. In the past six weeks prices have retraced half of the decline. Prices are now above the rising 50-day moving average line as well as the rising 200-day line.

The daily On-Balance-Volume (OBV) line has been flat until late July when it briefly spikes higher. The trend-following Moving Average Convergence Divergence (MACD) oscillator has also moved rapidly up and down around the zero line. Last month this indicator moved above the zero line for an outright go long signal.

In this weekly bar chart of ADP, above, we can see that prices are above the rising 40-week moving average line. Similar to the daily OBV line, the weekly OBV does not indicate aggressive buying. The weekly MACD line has been above the zero line for the past 11 months but right now the two moving averages that make up this indicator are on top of each other making it difficult to see a proper signal. 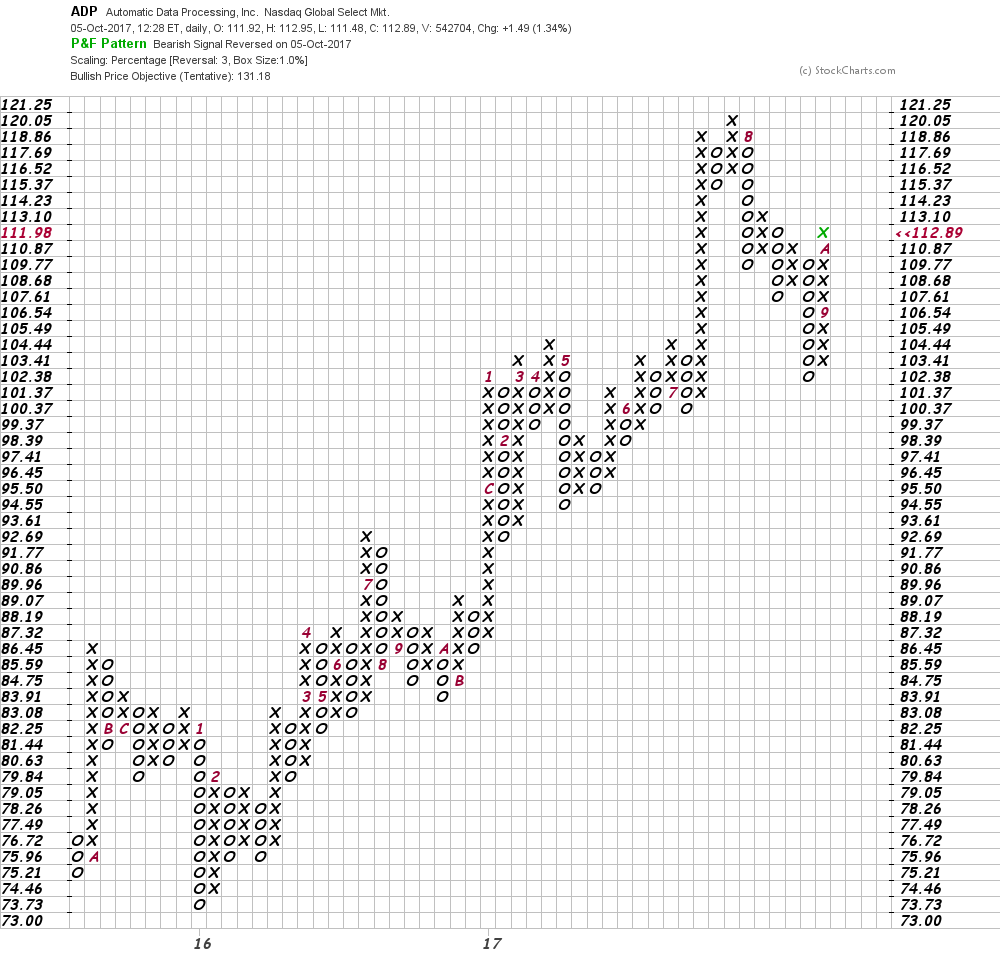 In this Point and Figure chart of ADP, above, we can see that when we ignore time and volume a clearer picture of trend is revealed. A trade at $113.10 will strengthen this chart and it will take a decline to $101.37 to weaken it.

Bottom line: ADP is likely going to work higher into the $115-$120 area but there could be headline risk and gaps along the way.

Get an email alert each time I write an article for Real Money. Click the "+Follow" next to my byline to this article.
TAGS: Investing | U.S. Equity | Technology | Corporate Governance