We have not looked at Western Digital Corp. (WDC) since the end of November when I wrote that "WDC has arrived at the moment of truth, so to speak. Prices are trading softer Wednesday morning and we will see if the 200-day moving average line will again act as support. The risk becomes clear -- two consecutive closes below the 200-day average line would tell me to reduce my long exposure."

WDC declined into early December. Prices traded sideways into late February and then made a brief upside surge that was quickly reversed. WDC moved steadily lower to early September where it is starting to look more positive. Let's explore the charts and indicators on this stock discussed by Jim Cramer Wednesday night on Mad Money.

In the daily bar chart of WDC, below, we can see some improvement in the indicators. Prices are still below the declining 50-day moving average line and perhaps too far below the declining 200-day line. The daily On-Balance-Volume (OBV) line made a low in early September and has not made a new low since. It is early but this could be a sign that the selling pressure is over for the most part. The pace of volume looks heavy from early August suggesting that aggressive selling was meet with aggressive buying.

In the bottom panel is the 12-day momentum study, which shows a higher low from August to September. This is a bullish divergence when compared to the lower lows in price. It tells us that the pace of the decline has slowed. This can foreshadow a price recovery.

In the weekly bar chart of WDC, below, we see a bearish alignment of our to-go indicators. Prices are below the declining 40-week moving average line. The weekly OBV line has been declining the past seven months.

The weekly MACD oscillator has been below the zero line for months but has recently narrowed. A crossover to the upside would be a signal to cover shorts.

In this Point and Figure chart of WDC, below, we can see that prices reached a longer-term downside price target. 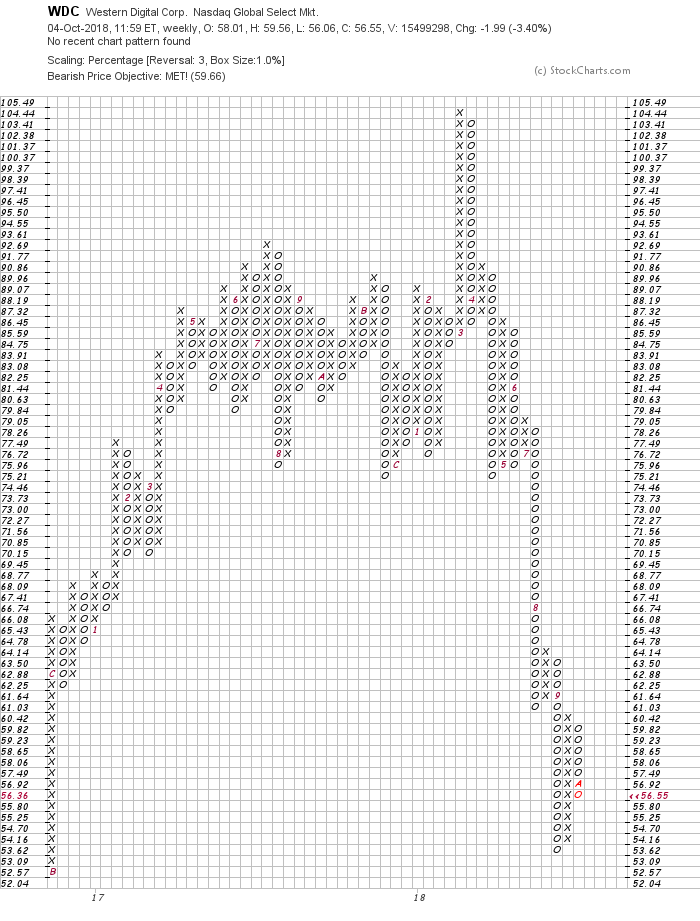 Bottom-line strategy: WDC is still in a downtrend but the daily chart where things show up first is telling us that the decline could be nearing an end. Shorts should cover on weakness and bulls should wait for more basing action.