For his "Executive Decision" segment on "Mad Money" Wednesday, Jim Cramer talked to Gary Wojtaszek, president and CEO of CyrusOne Inc. (CONE) . CyrusOne is a data center REIT. Wojtaszek noted that bonds can become an attractive alternative to owning a REIT when interest rates rise. With the 10-year Treasury trading at a 3.20% this morning, a look at the CyrusOne charts is in order.

The daily On-Balance-Volume line moved up from February to the middle of September, where it is showing a possible peak. In the lower panel is the 12-day price momentum study, which shows lower highs from June to September while prices make higher highs. This is a bearish divergence and it probably foreshadowed the price weakness from the middle of September.

In this weekly bar chart of CONE, below, we can see can see weakness in the indicators. Yes, prices are still above the rising 40-week moving average line, but that may not last for long. The weekly OBV line shows a decline from the middle of August, which suggests that investors sold CONE into the peak. The weekly Moving Average Convergence Divergence (MACD) oscillator is poised to cross to the downside, signaling a take-profits sell.

In this Point and Figure of CONE, below, we can see a downside price target of $54.29. 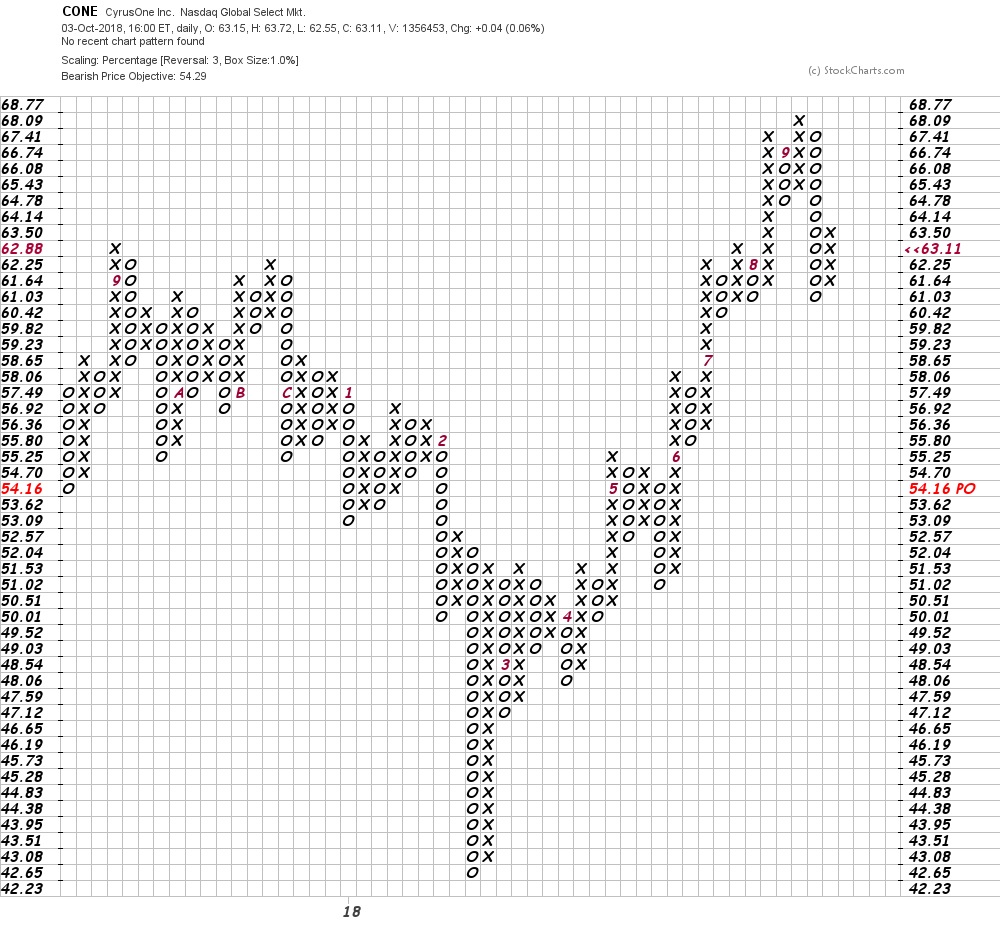 Bottom line strategy: Interest rates look to be on the rise for now and with some bearish signals on the charts of CONE I would look for more price weakness in the weeks ahead. If prices trade down toward the Point and Figure target of $54.29 we will have broken the 200-day average. I would look for other places for investment ideas.

Get an email alert each time I write an article for Real Money. Click the "+Follow" next to my byline to this article.
TAGS: Investing | U.S. Equity | Industrials | Real Estate | Financial Services | How-to | Mad Money | Risk Management | Stocks

The U.S. consulate in Hong Kong was blocked from completing a September deal to sell its residential quarters to Hang Lung Properties.

Here's a trade in RKT, as real estate trends change amid the pandemic.