Constellation's $189.6 million investment for a 9.9% stake in Canopy Growth Corp.  (CGC)  last year has garnered a $1.3 billion gain since November, according to CEO Rob Sands.

The company's second investment -- of $4 billion -- made this past August, will bring its total stake in the company to 38%.

"We continue to be extremely bullish (on Canopy)," Sands told analysts Thursday morning. "We're right on the cusp of recreational marijuana become legal in Canada, October 17."

He said this could return the billions that Constellation is looking for in its return, even aside from the international businesses that Canopy has been pursuing. 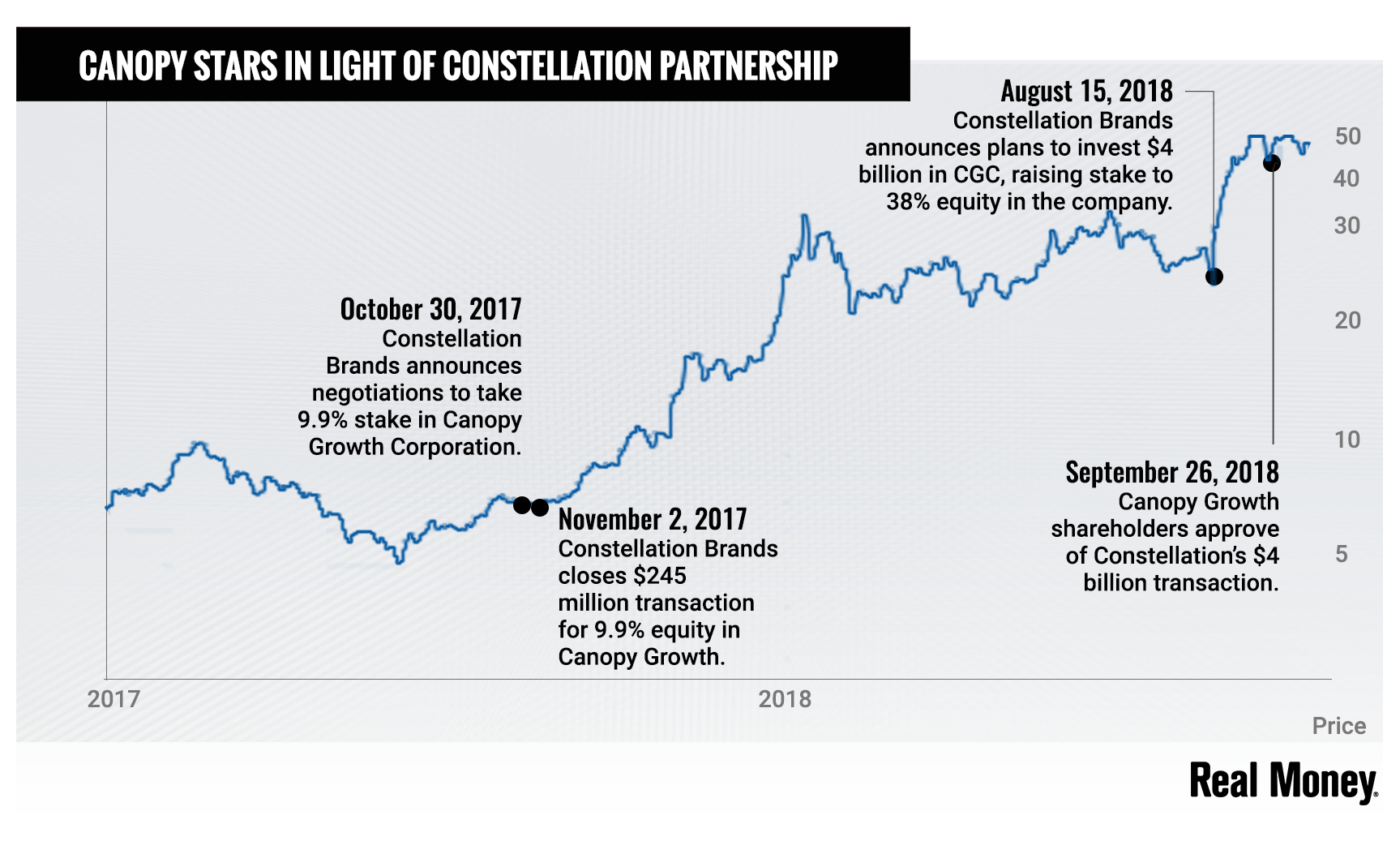 "Most people are predicting somewhere in the $5 billion (range), market price in Canada, $5 billion to $6 billion or $7 billion range for legal recreational cannabis," he explained. "Canopy has secured approximately 35% of the supply contracts, so we expect to take a significant share of that business as it develops over the next 12 to 18 to 24 months."

While Sands said his firm had not factored the United States into his valuation on the $4 billion deal in August, he said that CBD could add value to the already blossoming partnership.

"The Farm Bill legalizes CBD and that will be an interesting market to see how that develops in the U.S, which we'll be poised to participate in," Sands explained. "Canopy is one of the largest CBD producers in the world, so it's very possible that depending on how exactly the law works and whether imports are permittable, the CBD could well come from Canopy."

He added that movement in the United States toward legalization state by state adds to his bullishness.

To be sure, at current levels some analysts think Canopy has room to fall back to earth, For example, Morgan Stanley analyst Dara Mohsenian places the fair value fo Canopy stock at $25 per share, about one half of the current price.

Per the terms of the deal with Canopy, Constellation maintains warrants that can be executed in two tranches over 3 years after the deal closes.

If executed, the beer giant would be able to take over 50% control over Canopy. Sands was asked about possibly exercising the warrants on the call Thursday morning, but did not respond directly.

"We wouldn't be surprised if STZ eventually acquires all of WEED as its initial investment in October 2017 of $190 million for a 9.9% stake has already more than paid off, with STZ reporting a significant gain of [more than] $700 million since its initial investment," Wells Fargo analyst Bonnie Herzog speculated in a note on August 15, the day of the investment announcement.