The Cradle Will Rock

You saw the data. First, ADP hit the tape with an almost overwhelmingly positive upside beat for September job creation. Then, the Institute for Supply Management posted their service sector survey results for the same month. Robust growth would be an understatement.

The headline, number, or what many still refer to as the PMI hit the tape at 61.6 -- but as all economists know, the most important component in any business survey is the one labeled "New Orders." There are several highly important lines within these results, but without New Orders, your business becomes a hobby. Plain and simple.

So, it is that New Orders printed at 61.6 for September, same number as the headline, and very close to the 61.8 print for New Orders that the ISM printed for the manufacturing sector on Monday. If you read me often, then you know that I have been cautioning the Fed on pushing up on short-term interest rates -- especially if there was no belief in domestic economic growth beyond two years.

Surveys for the month of September 2018 do not tell you much about long-term growth, but they do tell you that growth is probably hot as a pistol. Right now. As for inflation, both Monday's numbers for pricing and yesterday's were up in the mid-60s. Clearly, this should put upward pressure on year over year data for the PPI that the BLS will go public with next Wednesday.

Tomorrow's BLS data, with yields where they are now, is going to be the most important set of numbers that most of you have reacted to in at least several years. Do not kid yourself. This morning, as I stand guard over the rest of you, the U.S. 10-year yields 3.22% in overnight trading. Think 3.25% is the level to watch? Maybe. I think this level matters perhaps even more. Take a look at this 20-year chart tracking the yields for the U.S. 10-Year Treasury Note: 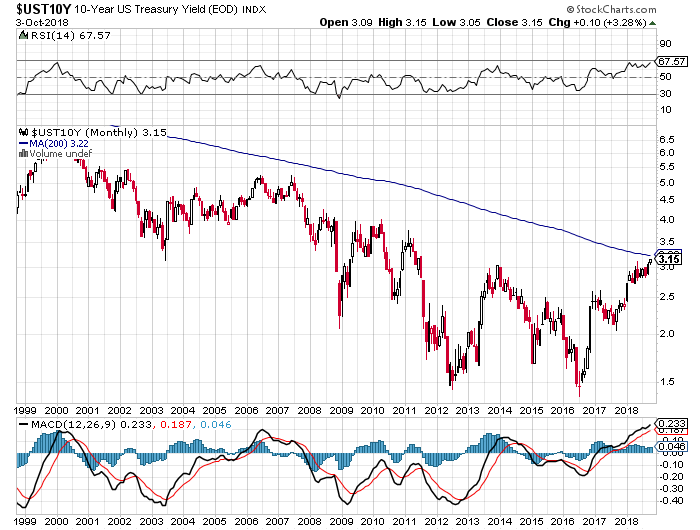 Notice the 200-month simple moving average? That's right, sports fans.. 3.22%. I woke up at zero dark thirty to very smart folks talking about this on Twitter. Tomorrow's year-over-year wage growth number, and perhaps any movement in the Participation Rate, may decide which side of this average that we have to live on for a while. Notice, it's been a few years since this line has been tested from the upside. In fact, it's been decades.

Predictions? Sometimes I go there. Sometimes I'll read someone else's and if they make sense, I'll put something in play. The reason that I'm still around all these decades later --  even after algorithms perverted the process of price discovery at the point of sale -- is that I am amphibious. One rule that supersedes all others. Adapt. To anything. Any environment. Any time.

Knock us down. Good luck with that, sport. Happens all the time. We're coming back. Every. Single. Time. Challenge us by changing the game? We relish the thought of a desperate fight versus superior forces. In fact, why don't you take your ball and go home before you hurt yourself.

You know who has been unloved, not to mention... undervalued? That's right. The banks. No matter how tough it gets for this group, we always preach keeping several core positions across the space. The ultimate value story in the worst of times. An untamed beast in the best. The group ventured out of their cages on Wednesday, but let's face it... the banks have had a lousy week, lousy month, lousy year.

If you read the kid, you know that I almost always am long JP Morgan (JPM) . As best in class, they make it easy. Citigroup (C) remains an extreme valuation play, and besides that, they are throwing a ton of money at us, the shareholders. Then there's Goldman Sachs (GS) . Honestly, the new guy can't be any worse than the last, right? Besides, the trading game is going to get pretty gnarly.

Investment banking will be the new focus they say -- and perhaps it will, but the environment for trading is about to get volatile (my prediction). That may lead this Solomon (brother) all the way home to where GS belongs.

Under-exposed to the banks? Need to catch up, but dreading the very thought of paying up for names on the move. Earnings start coming in next week, gang. Premiums will be paid now for taking on certain risks. Can you dig it? Should you dig it?

Don't throw a "Hail Mary" pass as time runs out. Throw around some ideas for those needing to get involved. Note: These prices are going to be moving around, so the trader is going to have to adjust these prices for windage and elevation.

For The Kid Who Has Everything

For The Kid On A Budget

Note: You must go out three months in order to gain sufficient premium value to make theses sales worthwhile.

Get an email alert each time I write an article for Real Money. Click the "+Follow" next to my byline to this article.
TAGS: Investing | U.S. Equity | Financial Services | Analyst Actions