Etsy Inc. (ETSY) was an "interesting" IPO. The stock declined quickly after its debut and did not reach a low until about 10 months later. After ETSY declined to single digits, it reversed direction and has made a large bottom formation the past two years. Turnarounds on the chart are always nice to find, especially if it is early in the process. Let's check the latest charts and indicators.

In this daily bar chart of ETSY, above, we can see just part of a bottom formation that stretches back to August 2015. Prices traded sideways from November to the end of February, and sold off sharply to the $10-$9 area, which was a retest of the early 2016 lows. The quick and steep decline in early March did not start with a large downside gap, however, the rally in May has an upside gap.

Prices are up more than 80% from their March lows, trading above the rising 50-day average and the 200-day moving average. There is a bullish golden cross of the 50-day average line breaking above the slower-to-react 200-day line. The On-Balance-Volume (OBV) line turned higher in May, signaling more aggressive buying, but the line has stalled or moved sideways in September. The Moving Average Convergence Divergence (MACD) oscillator crossed to the downside for a take profits sell signal in mid-September.

In this weekly bar chart of ETSY, above, we can see the entire bottom pattern. In my mind, the base or bottom begins around $16 in September 2015. The low of the bottom comes in January/February 2016, as ETSY sinks to the $8-$6 area. There is a rally back to $16 by September/October 2016 and a pullback/retest in March/April around $10.

More recently, prices have broken out above $16 to complete the base. ETSY rallied above the rising 40-weeek moving average line in May and the weekly OBV line started to climb from May, telling us that buyers of ETSY were being more aggressive. The Moving Average Convergence Divergence (MACD) oscillator is in a bullish configuration above the zero line. 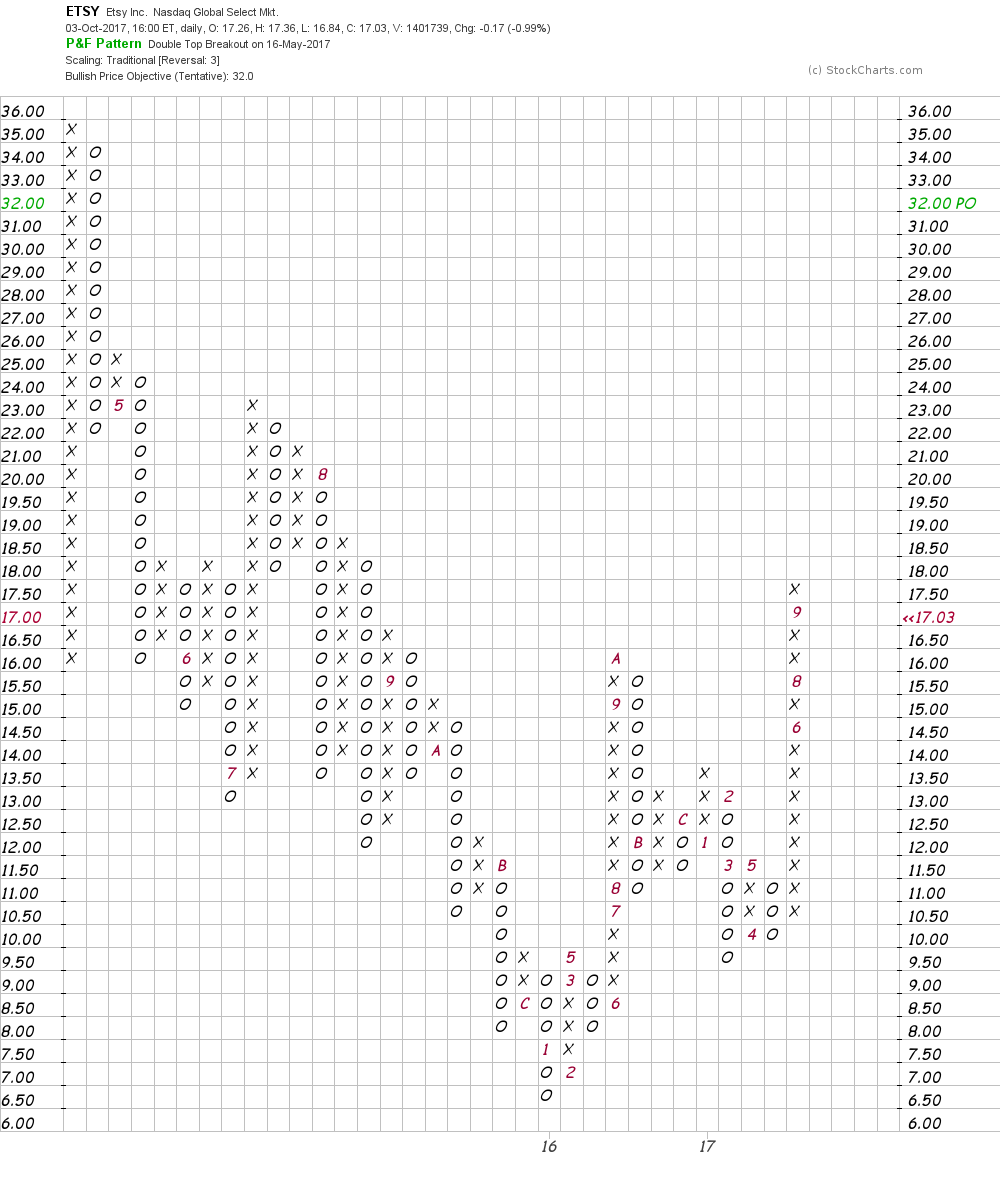 In this Point and Figure chart of ETSY, above, we can see the base pattern displayed without respect to time and without volume. The breakout trade at $16.50 is clear, and this chart projects a $32 upside price target.

Bottom line: I like the turnaround on the charts and indicators for ETSY. Because $16 was the top of the pattern, I would like to try to buy a pullback or retest of that level. Aggressive traders can look to buy a dip to around $16, risking below $15; $32 is our longer-term price objective.

Get an email alert each time I write an article for Real Money. Click the "+Follow" next to my byline to this article.
TAGS: Investing | U.S. Equity | Consumer Discretionary | Markets | E-Commerce | Risk Management

Where Will Peloton's Woes Lead the Stock?

The exercise equipment maker's chart indicates that the descent in its shares could go on for some time.

Boat Maker Brunswick Should Continue to See Smooth Sailing Ahead

The charts of the recreational marine company indicate more potential upside for its shares.

We have three price targets.