On Tuesday we discussed why Lennar Corp. (LEN) was a stock we would avoid for the rest of the October. We've got a second one for you.

Vulcan Materials Co. (VMC) is another company whose stock I do not think will fare well this month. Let's check the charts and indicators and I will give you my perspective on this name.

In this daily bar chart of VMC, below, we can see that prices are above the declining 50-day moving average line but that is a recent development as we can see that prices have been below the declining 50-day line since early July. Prices are also below the declining 200-day line which turned down around mid-August. One technical indicator -- the On-Balance-Volume (OBV) line -- has been bearish since the middle of November and it has made new lows recently signaling continued aggressive selling and liquidation. The daily Moving Average Convergence Divergence (MACD) is good at following the trend and this indicator turned bearish in the middle of July when it broke below the zero line.

In this three-year weekly chart of VMC, below, we can see that prices have been under the declining 40-week moving average line the past two years. The weekly OBV line peaked in November and has been on the defensive since then. This decline in the OBV line when prices have generally traded sideways signals a investors have been liquidating long positions steadily and quietly for months. The weekly MACD oscillator moved below the zero line in August for an outright sell signal.

In this Point and Figure chart of VMC, below, we can see that the price action has a bearish cast to it and a downside price target of $97. 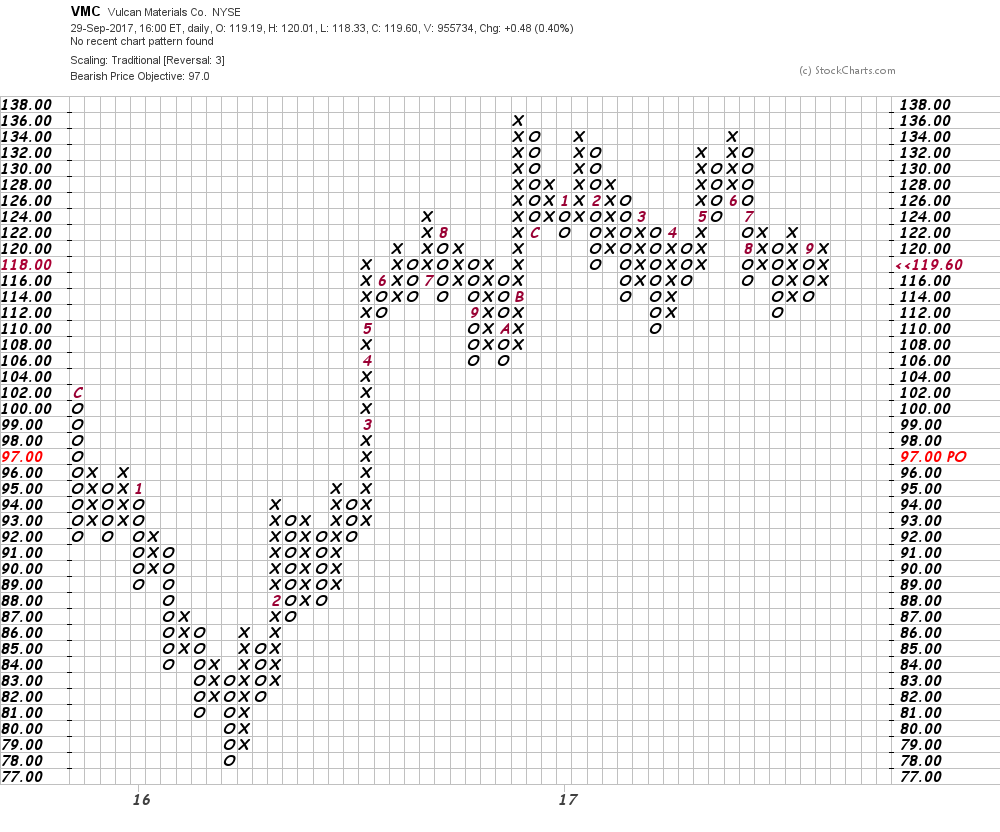 Bottom line: VMC has been finding some buying interest below $115 in March and August and September but the bigger picture is negative. A decline to $110 or lower is likely to precipitate further declines. Traders should avoid the long side of VMC.

Get an email alert each time I write an article for Real Money. Click the "+Follow" next to my byline to this article.
TAGS: Investing | U.S. Equity | Industrials | How-to | Stocks