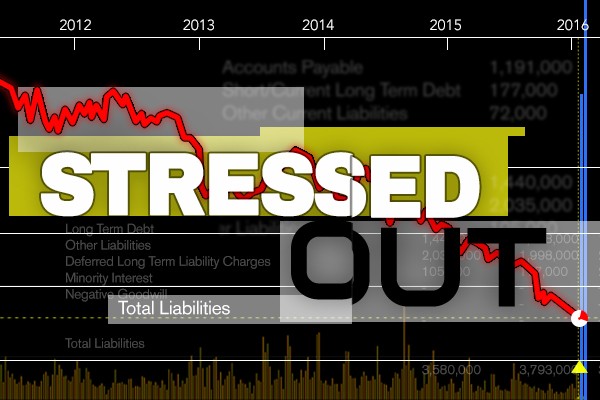 One way to reduce stress is to lighten the load, advice Stressed Out Sears  (SHLD) is taking to heart as it attempts to unload its Craftsman tool business. Sears is close to finding a buyer for the business it registered in 1927, according to Bloomberg.

Rival tool maker Stanley Black & Decker  (SWK) and Hong Kong's Techtronic Industries are both interested in purchasing the tool business from the retailer, according to Bloomberg sources. Shares of Sears shot up nearly 15% on the news, slightly reversing a yearlong slide that has seen its stock lose 35% since January.

Fitch Ratings estimated that Sears will burn through between $1.6 billion and $1.8 billion due mainly to $1 billion in EBITDA. That comes a year after the company reported $837 million in EBITDA losses the year before.

Cutting costs has been the modus operandi for Sears as the company looks to turn around its sagging retail business.

Last month, Sears announced it was shuttering another 64 Kmart stores across the country, leading to speculation that the company could shutter the entire business. Sears CEO Eddie Lampert dispelled those rumors in a blog post earlier this week, pledging his unequivocal allegiance to the Kmart brand.

"Recent reports have suggested that Kmart will cease its operations. I can tell you that there are no plans and there have never been any plans to close the Kmart format," Lampert wrote. "To report or suggest otherwise is irresponsible and is likely intended to do harm to our company to the benefit of those who seek to gain advantage from posting these inaccurate reports."

While Kmart is not on the chopping block, Sears is also looking to unload its DieHard battery and Kenmore appliance units in an effort to get leaner. The company has already jettisoned its Sears Hometown and Sears Outlet businesses as well as its Lands' End clothing brands.

Lightening the load could help Sears' stress levels in the short term, but it still needs a lot of work to revive its struggling retail business for long-term growth. Finding a buyer for brands it no longer wants is a good first step, but there are still questions as to whether those steps will be enough.

Stanley Black & Decker was up less than 1% Tuesday on the news.

Get an email alert each time I write an article for Real Money. Click the "+Follow" next to my byline to this article.
TAGS: Commodities | Markets | Consumer Staples | Investing | Consumer Discretionary