U.K. Prime Minister Theresa May sent the pound to a new 31-year low versus the U.S. dollar with her tough stance on Brexit, and sowed despair in the hearts of some analysts in the process.

"There's nothing there to soften the outlook for sterling, at all," wrote Societe Generale foreign exchange expert Kit Juckes in a morning note aptly headlined "Cutting off your nose to spite your face."

Still, investors hoping for a turn in the British currency's fortunes should watch the Bank of England's next move very carefully, because that's where some relief could come from.

The pound, liquid and easy to trade, is most sensitive to any news that indicates the U.K. is ready to leave the European Union without reaching a deal on access to the single market that would allow banks to retain their so-called "passporting" rights.

Passporting rights are crucial to the ability of banks and investment firms to do business in the rest of the 27 EU members. On Tuesday, May dealt a heavy blow to the financial industry, according to a Bloomberg report.

The report quoted three senior figures in May's government as saying she will refuse to prioritize the banking industry in negotiations with the EU, even though the financial industry contributes around £65 billion ($83 billion) every year in taxes and employs more than 1 million people in Britain.

Needless to say, losing access to the massive EU market would be very bad for the country's banks. Many of them rely on the EU's "passport" to harness business not just in the EU but also from other non-EU regions. Countries such as the U.S., Japan or Australia are using the business-friendly U.K. as a springboard to the single European market for services.

The timing of such a blow couldn't be worse, either. Over the past year, the U.K.'s biggest banks -- HSBC (HSBC) , Barclays (BCS) , Lloyds (LYG) , Royal Bank of Scotland (RBS) , Standard Chartered and TSB Bank -- are down by more than 18% versus an advance of more than 10% for world stocks, according to data from FactSet. 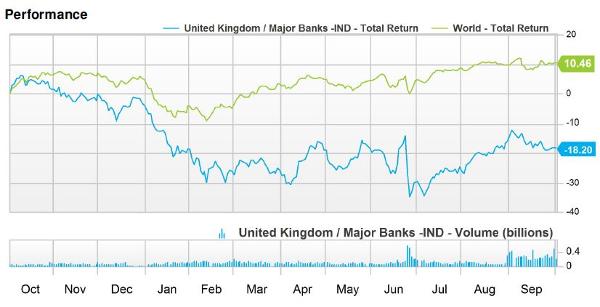 Investors can blame this underperformance on the specific woes the banking industry is going through -- heightened regulation, low interest rates, depressed economic environment. These apply to banks elsewhere as well.

But even compared with global banks, U.K. financial institutions are doing particularly bad, as the chart below shows: 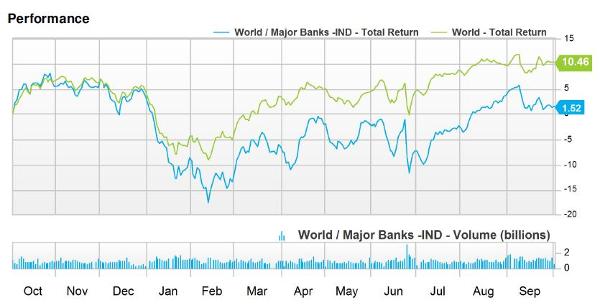 Global banks managed to eke out a gain in the past year, probably due to the dominance of big Chinese banks Industrial and Commercial Bank of China and Bank of China. But even so, it points to deeper problems for U.K. banks than for those in the rest of the world (except, probably, those in the eurozone).

Snubbed by May, big banks could turn to Bank of England governor Mark Carney for comfort. After all, the Bank of England runs the Financial Policy Committee (FPC), which is in charge of banking stability. Banks that are making constant losses are not, over the long term, stable.

Carney, therefore, will find himself between a rock and a hard place at the next monetary policy meeting on Oct. 13: he either keeps interest rates on hold, risking an economic slowdown but allowing the banks to widen their net interest margins, or he cuts them further from their record low 0.25%, risking to push banks further into crisis.

Which path the Bank of England will take will be crucial not only for the future of U.K. banks, but also for the pound. Investors should perhaps not bet the farm on a weaker-for-longer U.K. currency just yet.
Get an email alert each time I write an article for Real Money. Click the "+Follow" next to my byline to this article.
TAGS: Currencies | Markets | Regulation | Financial Services | Investing | Economy | Jobs | Politics | Risk Management