The charts and indicators suggest that Proofpoint Inc. (PFPT) could weaken a bit more. The last review of PFPT was in early June. Prices bounced in July but proceeded to slip lower in August and still lower in September. Prices are getting a little stretched on the downside now but signs of an approaching reversal have not been sighted. Let's check the latest charts and indicators.

In this daily bar chart of PFPT, below, we can stand back and see the price action from March to September as a rounded top formation. Prices have spent months "rolling over". The 50-day moving average line has also rolled over and has been in a downtrend since June/July. The 200-day moving average line was broke in September and now the 50-day average line is breaking below the 200-day line for a bearish dead cross. The daily On-Balance-Volume (OBV) line peaked in May/June and its decline tells us that sellers of PFPT have been more aggressive with heavier volume being transacted on days when prices have closed lower. In the bottom panel of this chart is the 12-day price momentum study which shows lower lows which tells us that the decline has not slowed. A slowing of the decline would tell us that buyers have been buying on a scale down.

In this weekly bar chart of PFPT, below, we can see a bearish alignment of the indicators. Prices are below the cresting 40-week moving average line. The weekly OBV line has been in a decline the past five months telling us that sellers have been aggressive. The Moving Average Convergence Divergence (MACD) oscillator is about to cross below the zero line for an outright sell signal.

In this Point and Figure chart of PFPT, below, we can see the topping pattern and a downside price target of $95.07. 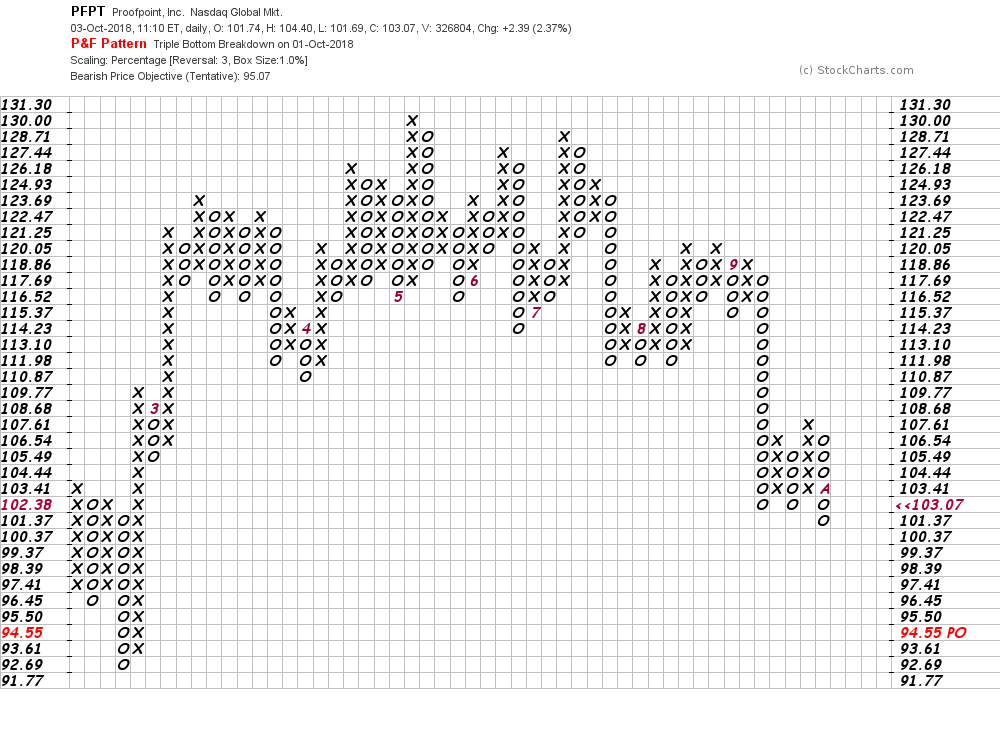 Bottom line strategy: PFPT is pointed down and could retest the top of a potential support area beginning around $95. A period of new base building will be needed, in my opinion, before a fresh advance may get under way.

AutoZone Continues to Rally on Its Earnings Beat