Just what do we make of all this? Plain to see for all is the Dow Jones Industrial Average screaming to a record high, topped by a record close. The investing public had not seen a new high for the blue chip index since ... wait for it ... way back on September 21. It becomes clear to me that we have splintered markets that can be both positive and negative at the same time.

It seems like just yesterday that folks, when referring to the marketplace in general, were really speaking about the Dow Industrials, as in "the market was up or down twenty points today." Sometime around the mid-1990s, the S&P 500 took the mantle of overall market recognition away from the Dow, and that broad index would at times be referred to as "the market." Broader ETF tracking made that change permanent.

Nowadays, I do not really know any if index can broadly claim to represent U.S. equity markets. In yesterday's trading session, we did see the DJIA increase by 122 points. We also saw a whopping 4.5% of NYSE, and Nasdaq listed stocks trade at their 52-week lows. How can that be, with the economy supposedly humming, and the perception being that the stock market, in aggregate is within points of it's all-time highs? In fact, at the New York Stock Exchange on Tuesday, decliners beat advancers by 8 to 5. The beat down was even worse at the tech-laden Nasdaq, where the ratio was greater than 2 to 1.

Clearly, rising input costs are starting to weigh upon certain sectors. As the positive hard news regarding North American trade hit the tape, positive dreams and hopes pressed on regarding global trade. This is precisely why an index comprised of large multinational corporations is out-performing. Money has to come from somewhere, and as the blue-chips have rallied, the small-caps, represented here by the Russell 2000, have reverted to mean. These two indices are now virtually side by side, year to date at up a rough 8%.

As a former Wall Street market economist, it is those rising input costs that I cannot erase from my mind: What tariffs and wages are suddenly doing to multi-line retailers, we are seeing in rising fuel prices that are putting the hurt to the transports. These are the kind of things that stall growth, my friends. Yes, ultimately rising commodity prices for specific types of cargo such as oil will be positive for railroads and truckers, but not so for airlines.

To Thy Own Self Be True

I have said publicly in the past that active traders may need to open different accounts with different defined mission statements. I think the retail investor, who perhaps has his or her eyes on whatever they do occupationally, and is unable to watch their holdings all day -- like we in the industry do, might be better served, and certainly become better organized by taking such steps.

I know from my own experience that by separating equities from options, or value from growth, or investment grade from the speculative, that a trader will not only find it easier to focus, but also discover where that trader's individual strengths and weaknesses lie. Trust me, we all have them. This is a complex game. I will trade anything from used hubcaps to baseball cards, but you probably associate me more with tech, defense, retail, banking, the transports and energy, right? Know thyself.

Easy money. At least that's what I thought. Moron. Okay, I bought DowDuPont (DWDP) shares back in April. Never bothered to hedge the name or play any derivative contract games. Just kind of put this one on the book and ignored it, expecting that we would see this one blossom without having to think about it much. I mean, one big bad industrial giant about to split into three viable, stand-alone corporations. I'll just watch my P/L grow from here, right guys? Guys?

DowDupont -- the sleeping giant. I am not taking a loss on this one. I'm not up either, after the recent selloff. I am not anything on this now six month old position. Can't blame the trade spat with China. You can see how well Caterpillar (CAT) , Boeing (BA) , Apple (AAPL) , and suddenly now Intel (INTC) have performed. They're all China-exposed names.

Rising input costs? Yeah, that's a thing for DowDupont. The stock was downgraded last week by Nomura. Nomura cited rising prices for ethane feed-stock that would squeeze margins for ethylene across both Europe and North America not just this year, but also in 2019. In Nomura's view, this will force lower the firm's estimates going forward.

Still, we know that CEO Ed Breen is putting his own money on the line. We also know that he's no fool. Does the firm break up in 2019? Maybe not completely into three parts until later than that? The waiting, they say, is the hardest part. 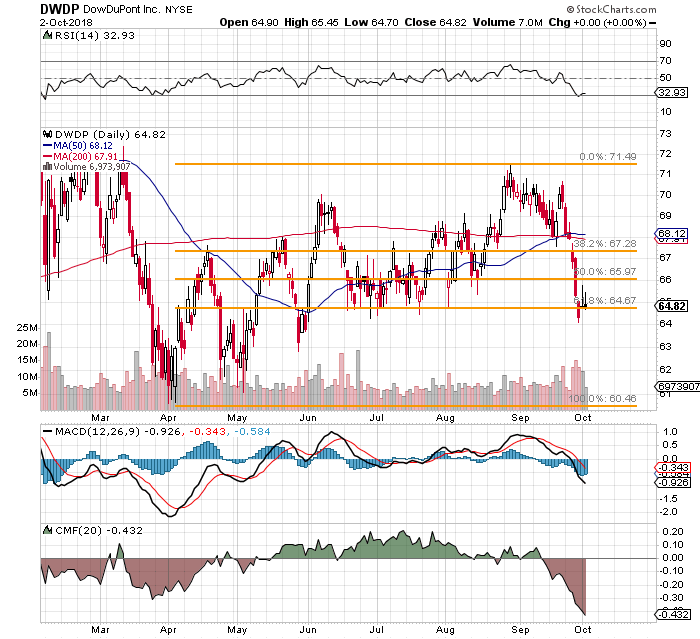 Just look at that Chaikin Money Flow. Gross. In fact, if you like this name, just turn your head, because there is not much here that you want to see in the recent past -- from the daily MACD to the Relative Strength indicator to the very wobbly 61.8% retracement level now in play.

So, this is who you've dated all year, and you want to take this one to the prom, but the prom is still a long ways off. Well then. Only one thing to do. Reduce net basis and raise some dough.

DWDP earnings are due in a month (November 5). My thought for those already long equity in DWDP is to sell or write what options traders refer to as a "strangle," with an expiration date just beyond the earnings release, in order to maximize the values of the premiums in aggregate. In our example, we'll assume that the trader is long 100 shares of the equity.

By making these sales at these prices, the trader will reduce the net basis of the equity long by $1.63. The risk is that in a month's time, the trader would have to buy an additional 100 shares of DWDP at $62 if the shares are trading lower than that. The trader may also get "called away" at $68 if the shares are trading higher, but that is more of a lost opportunity than it is any increased risk to have to factor in.

Best case, in my opinion, would be that the shares remain stable through expiration, and the trader might execute this trade over and over again, whittling net basis even further below the last sale. Believe me, I have ended up with basis costs in stocks that were well below the low end of a stock's entire trading range over the duration of my investment by managing risk in this way.

Ever pull down a panel of sheetrock only to find that the wooden studs were simply infested with termites? Just take a look below at the sheer number of Fed speakers that will be haunting us today.