Months ago, Paal Kibsgaard told us. We listened. We always do. Known for his frank honesty, Schlumberger (SLB) CEO Kibsgaard's words are highly focused on, and closely listened to by those making directional calls on crude prices. He told us in early July that the supply side of this market would become constricted as the industry faced some hurdles. Those chickens do seem that they have come home to roost.

President Trump has called for increased production in order to relieve oil prices. Nothing. Certainly not from OPEC. The cartel, sensing the potential for a return to greater relevance, politely took a pass on that opportunity last month. November 4th is the date on the calendar. That's when U.S. sanctions on Iranian oil exports are set to take effect. However, Iranian exports are already in decline. Observed exports from that nation dropped in September to 1.72 million barrels per day, the lowest per day output from that nation since February of 2016. Now, add at best what might be called unreliable, and at worst referred to as outright reduced levels of production from the likes of Venezuela and Libya.

The Permian? That's right. We'll pump the stuff right here. Kibsgaard covered that base too, about a month back. Kibsgaard warned that known bottlenecks would continue to hamper the transportation of crude out of the region. The Schlumberger CEO openly doubted the aggregate ability of Permian producers to meet consensus production projections of 1.5 million barrels per day.

The question now becomes this. The International Energy Agency sees demand continuing to grow right on through 2019. OPEC sees steady demand for decades to come. Now, with the Chinese economy visibly sputtering. With the fiscal situation in Italy forcing observers to start using the word "crisis", just what does $80 or $90 WTI, or $100 Brent do to the global economy?

Every Thorn Has It's Rose

Going into Q3 earnings, revenue expectations for the S&P 500 are for aggregate growth of 6.9% year over year, down from 7.5% in about a month's time. However, when broken down by sector, revenue expectations for energy names within that index are also down from summertime projections, but still for growth of a whopping 18.1%. Should there be some kind of negative trigger that hits the equity marketplace, this is where the performance is likely going to be.

I am not saying that revenue supported by rising prices in a business going through a change in the relationship between the forces of supply and demand is not at all priced in. I am saying that many of these names are currently executing at greatly improved levels from where they were prior to the bear market in energy, and almost all of these names also pay dividends that exceed what other groups will dish out. In short, the sector needs a core place in most portfolios.

You all know that I like explorer/producers such as British Petroleum (BP) , Royal Dutch (RDS.A) , and Exxon Mobil (XOM) . You all know that I remain loyal to under-performing oil service firms such as Schlumberger, and Halliburton (HAL) . However, the unrealized value could come from those pipeline firms that can't get out of their own way in the Permian. Maybe I'll take a look at something like Plains All-American (PAA) for a trade. The name closed at $25.55 last night, trades at 12 times forward looking earnings, debt overwhelms cash, so everything is not wonderful. Cash flows have been in decline. This name stands will a paltry Current Ratio of 0.75, and a Quick Ratio of 0.56. In short, this is speculative.

On the plus side, the name has started to pop, and they still pay you 4.8% to own the shares, despite having cut that dividend at the start of 2018.

A Trade, But Maybe Not An Investment 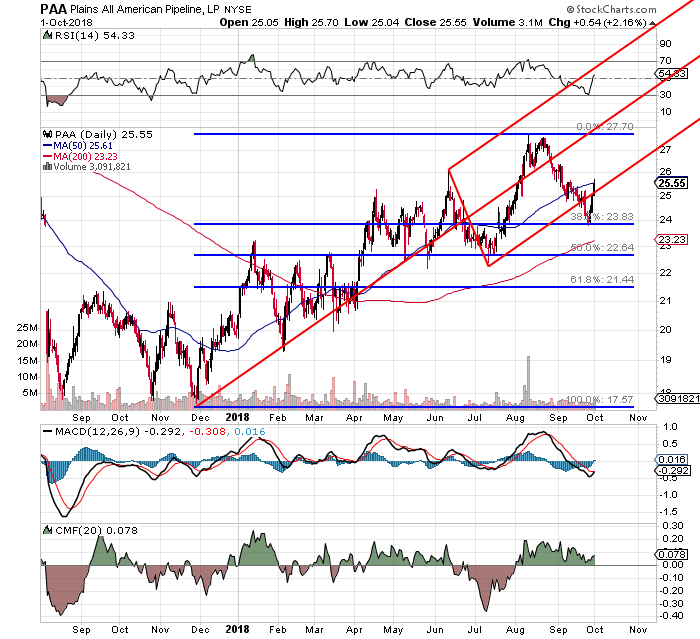 Immediately, what comes to the eye is the recent sell-off followed by the positive spike that may have invalidated the Pitchfork model. The near perfect trampoline like bounce off of the the 38.2% retracement level, however, is something to behold. We clearly have identified support. Now, is another run at $27.75 in the offing? The daily MACD, Chaikin Money Flow, and Relative Strength indicator all seem to be leaning that way.

Listen, I think this is a trade. It may turn into an investment. We'll see. PAA plans to go operational with the Cactus II Pipeline that would transport an additional 585K barrels per day from the Permian to Corpus Christie, Texas. The problem is that this plan does not go live until Q3 2019. That's a year. With any luck, we'll trade in and out of this one three times over by then.

The Mark Of Zorro

The mark of Zorro was a sharp letter "Z". So far (of late), the mark of Zuora (ZUO) has been a big, fat letter "L" for loser. Yes, I know there is a chance that you're in this name thanks to me. If you are, I can not make you feel better, but I can assure you that I am in the next foxhole, and that we are facing in the same direction.

Days like yesterday, where ZUO gets slapped around to the tune of 7% without some kind of publicized news event can be maddening. Fortunately, many names, at least on my book, performed well on Monday, camouflaging the poor performance of this name. The truth is, and we wrote about this in September, that the lock-up expiration date is bearing down on us now. That date is October 9th. One week out. Don't forget, this name opened in April. It was priced at $14 per share, and has still never traded below $18.75. That means that non-believers and those that got in, and never took profits at the high, still might.

Am I going to bail? That answer is short. No. That said. I am always working to reduce my net basis. Even with the steps that I have taken, I am down 15% on this position. The saving grace is that I do have some dry powder. Remember the lessons that we have taught on incremental trading. I currently stand with 60% of my intended position size on the name. I don't see anything delicious looking in the options market right now, so I won't be making any further sales in that department at this time. What I will likely do is add small here, but keep most of that potential 40% worth of dry powder dry for another seven days. Discipline? It's what has saved my tail a thousand times over. 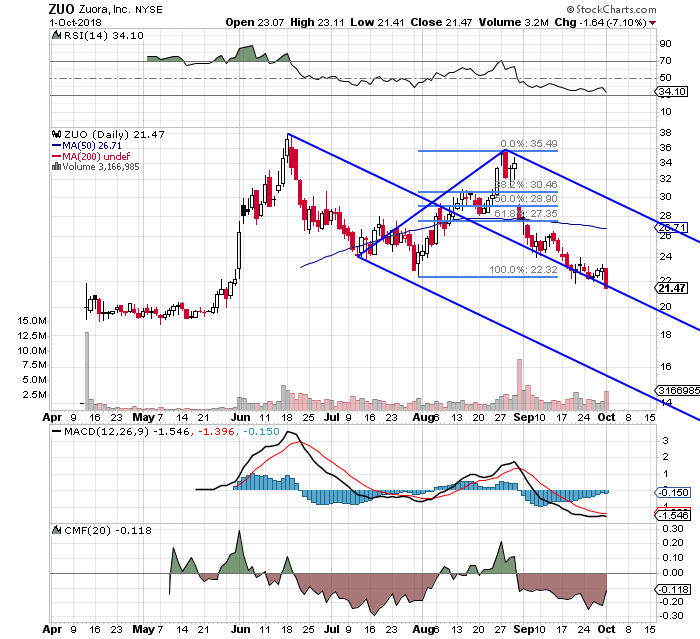 I don't mean to scare anyone, but you do see where the lower trend line spits out later this month, right? I don't think the name goes that low, but that is, in my opinion, our worst case scenario. Pretty? No. My wife is pretty. The chart clearly is not.

(Schlumberger and BP are holdings in Jim Cramer's Action Alerts PLUS member club. Want to be alerted before Jim Cramer buys or sells SLB or BP? Learn more now.)