The last time we looked in on Action Alerts PLUS holding KeyCorp (KEY) was at the end of July, and I concluded that, "Bottom line: I am not convinced KEY can break out on the upside, so existing longs should probably consider raising stop protection to a close below $17. That would break the rising 200-day moving average line as well as the March and April lows." By early September, KEY had closed below $17 to break the April low. Prices spilled a little bit lower and then reversed to the upside and now prices are about $0.50 away from a new high.

Prices are back above both the 50-day and the 200-day moving averages but I still do not get a strong feeling that prices are poised to for a significant upside breakout. This current advance could be considered the third attempt to break above $19.50 so is the third time the charm?

In this daily bar chart of KEY, above, we can see a bearish dead cross of the 50-day moving average line and the 200-day moving average line in early September. The On-Balance-Volume (OBV) line improved in September, suggesting that buyers were back for KEY and they were acting more aggressively. Like prices the OBV line has yet to make a new high.

The trend-following Moving Average Convergence Divergence (MACD) oscillator crossed above the zero line in September for an outright go long signal. So after nine months of neutral price action KEY has recently acted better. Maybe all that KEY needed was one month to be in position to retest its 2017 highs but I prefer setups where a breakout has been building for several months.

In this weekly bar chart of KEY, above, we have mixed signals. Prices are above the flat 40-week moving average line. The weekly OBV line has been weakening since February/March but it may be turning up in the past month.

The weekly MACD oscillator has been in a bearish mode since February but the two moving averages that make up this indicator are poised for a crossover to the upside and fresh outright go long signal. 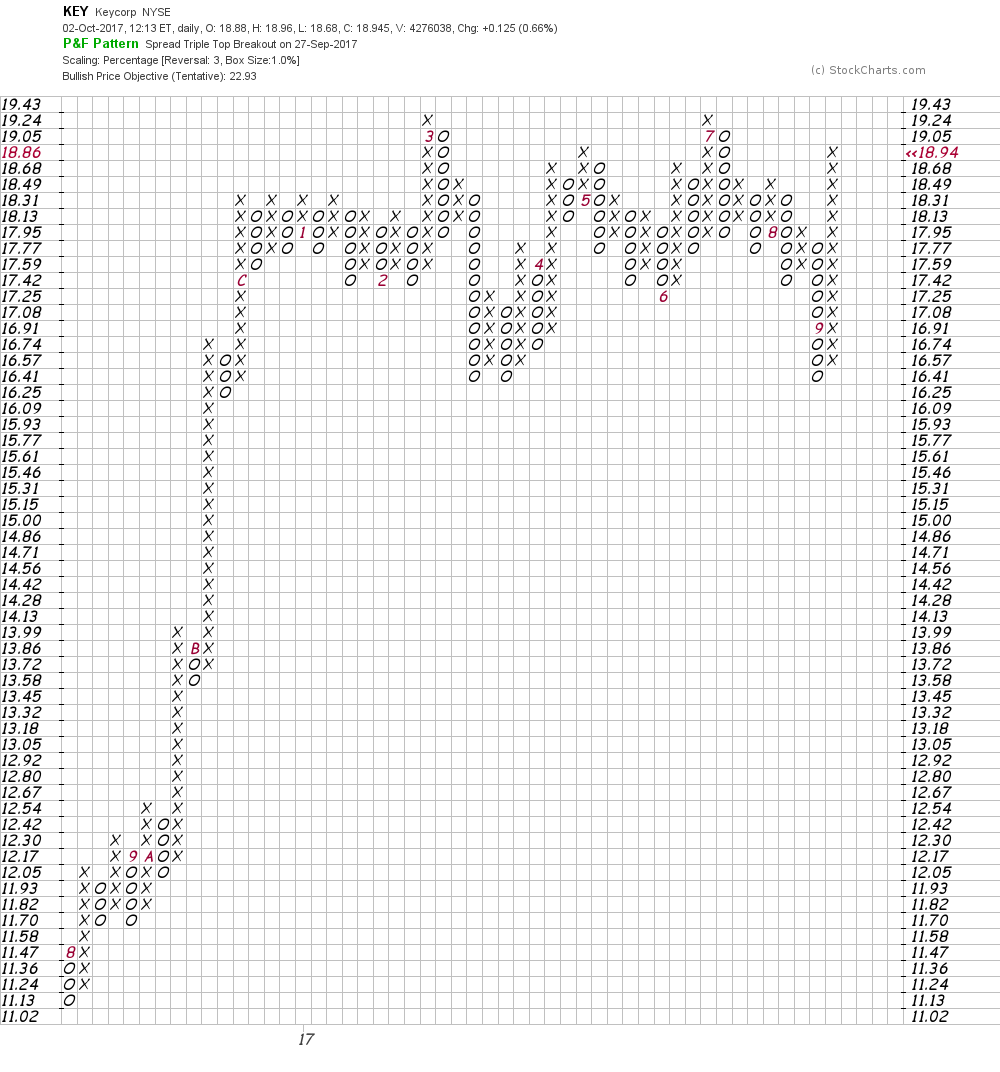 In this Point and Figure chart of KEY, above, we can see the sideways price action that has defined the chart since January. A rally to $19.43 is needed for an upside breakout and the first upside price target that is projected measures to $22.93.

Bottom line: If KEY trades up to $19.43 I will have to respect that kind of price strength but it has not happened and it may not happen. A decline back to $18.31 will keep the bulls in check for now.

Get an email alert each time I write an article for Real Money. Click the "+Follow" next to my byline to this article.
TAGS: Investing | U.S. Equity | Financial Services | How-to

Here's how to play the stock right now.

Intuit Is Prepared to Break Out to New Highs

Charts of the maker of TurboTax tell a bullish story.

Buy Essent Before It Makes Its Ascent

ESNT is a growth stock at a better-than-reasonable price right now.

Just Because We Rallied Doesn't Mean It Was Healthy

The big question after the day's odd brew of action is whether the rotational trading will continue to work.

Insure Your Portfolio With This High-Yield Dividend Stock

Unum Group has nearly an 8% yield on a low valuation.