Dollar Tree Inc. (DLTR) has made an impressive rally since July to break above its late April/early May highs but a measuring gap in August suggests that prices might have a sideways correction before an attempt at breaking the November highs. Let's check our short-term and longer-term charts for clues.

In this daily bar chart of DLTR, below, we can see a breakdown in June and a retest in July that does not go to a new low followed by a rally. For a technical analyst the breakdown in June was pretty bearish and the recovery in July and August was not really expected.

Prices move up to an early August high and then trade sideways for a week before an upside gap on heavy volume. This gap comes in a trend instead of breaking away from a bottom or top so it is called a runaway or measuring gap. With a measuring gap technicians have found over the years that the distance traveled before the gap is typically replicated after the gap.

For DLTR, the rally is $10 ($66 to $76) and the next rally should go from $78 to $88, or $10. The chart shows a recent bullish golden cross as the 50-day average crossed above the 200-day average line. The On-Balance-Volume (OBV) line turned up in late June to confirm the price advance. The Moving Average Convergence Divergence (MACD) oscillator crossed above the zero line in early August for an outright go long signal.

In this weekly bar chart, below, we can see that prices are above the flat 40-week moving average line. The weekly OBV line has risen sharply the past three months and the MACD oscillator crossed above the zero line for an outright go long signal.

In this Point and Figure chart of DLTR, below, we can see a breakout at $83.91. Another breakout would occur if prices rallied to $91.77. 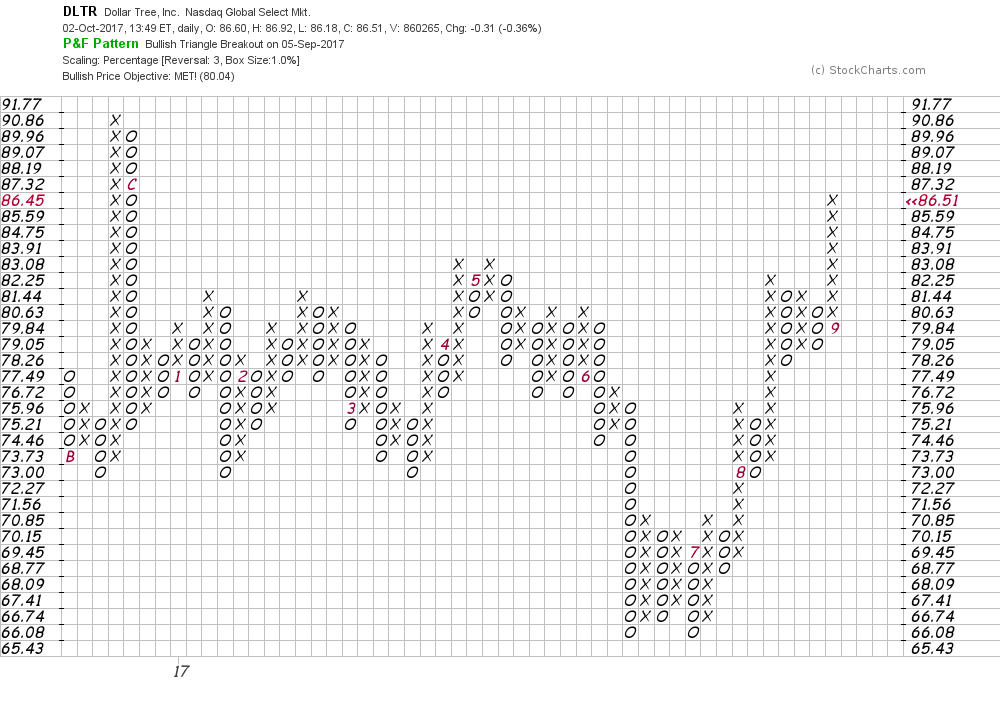 Bottom line: DLTR has been strong over the past three months but prices have nearly reached a price target base on a measuring gap. It would be acceptable or normal to see DLTR correct some of its rally since early July. At some point DLTR is probably going to retest the November highs but I would more likely anticipate that after a period of sideways price action.