Charles Schwab Corp. (SCHW) is sitting at the top end of its seven-month trading range bounded by $37 on the downside and $44 on the topside. A breakout to new highs looks like a matter of when and not if, but I am getting ahead of myself. First let's review the latest charts and indicators.

In this daily bar chart of SCHW, below, we can see the broad sideways consolidation pattern going back to January. If you look closer at the pattern you should notice that there have been more attempts to move lower than higher. Downside attempts are seen in March, April, May, June and September while upside tests are seen in only March and July and recently. I always believe that securities will trade in the direction of least resistance, much like water, so with five failures to move lower and only three to move higher I look for an upside breakout.

Currently SCHW is above the flat 50-day moving average line and the rising 200-day line. The On-Balance-Volume (OBV) line has been in its own sideways range since December but I would like to see it either lead on the upside or at least be coincident. In the lower panel is the Moving Average Convergence Divergence (MACD) oscillator, which in early September generated a cover shorts buy signal followed by an outright go long signal later in the month.

In this weekly bar chart of SCHW, below, we can see that prices are above the slightly rising 40-week moving average line. Though it looks like volume has been declining since the middle of 2016, the weekly OBV line has been rising since the middle of 2016. Despite the slower pace of volume we are still seeing stronger volume numbers on the weeks when SCHW has closed higher. The weekly MACD oscillator has been above the zero line since August 2016 and is now close to a fresh outright go long signal.

This Point and Figure chart of SCHW, below, shows the consolidation pattern described earlier. We can see that $44.38 is the breakout point. A potential price target of $54.76 is shown. 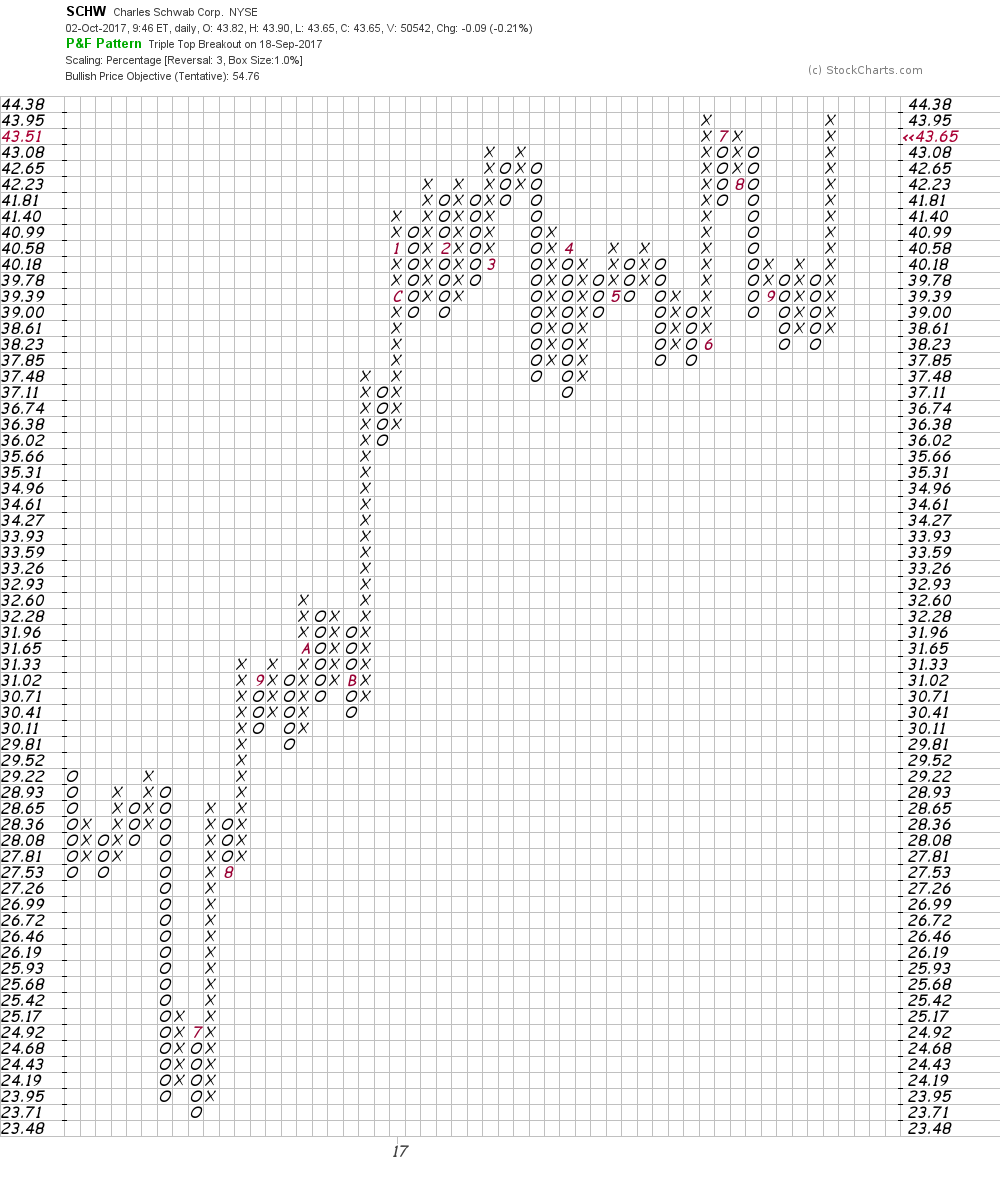 Bottom line: Earlier I wrote that I believed it was a matter of time before SCHW broke out on the upside. I maintain that view but want to note that I would also like to see a surge in trading volume on this breakout when it happens. Traders and investors should look to buy strength above $45 risking below $42 and looking or gains to the mid $50s.

Get an email alert each time I write an article for Real Money. Click the "+Follow" next to my byline to this article.
TAGS: Investing | U.S. Equity | Financial Services | How-to | Stocks