In an "Executive Decision" segment on "Mad Money" Friday night, Jim Cramer spoke with Sanjay Poonen, the COO of cloud software provider VMware, Inc. (VMW) . Cramer and Poonen talked about the fundamentals driving the stock of this company as it transitions to being a leader in the public and hybrid cloud, but I prefer to look at the charts and indicators.

VMW was last reviewed from a technical perspective in early June where I wrote that, "If you are still long VMW hang on. I would raise sell stop protection to $142 which would be a new low on the Point and Figure chart."

Prices have stayed above $142 and even retested its July high in September. However the volume pattern tells us to be cautious.

In this daily bar chart of VMW, below, we can see that prices have moved higher the past 12 months but investors have had to endure numerous pullbacks and corrections. Prices are above the flat 50-day moving average line and the rising 200-day average line.

The daily On-Balance-Volume (OBV) line has been flat/neutral from February to the end of June. Since July the OBV line has drifted slightly lower suggesting that sellers of VMW have been slightly more aggressive.

In the lower panel is the Moving Average Convergence Divergence (MACD) oscillator which has been staying close to the zero line lately. A turn to the upside would be bullish but a decline below the zero line would be a sell signal.

In this weekly bar chart of VMW, below, we have a mixed technical picture. Prices are above the rising 40-week moving average line which is bullish. Volume has declined since January suggesting that buyers are being less forceful.

The weekly OBV line has not made a new high since January but prices have made new highs creating a bearish divergence.

The trend-following MACD oscillator turned down in July for a take profits sell signal.

In this Point and Figure chart of VMW, below, a downside price target of $136 is being projected. A rally to $163.43 is needed for an upside breakout. 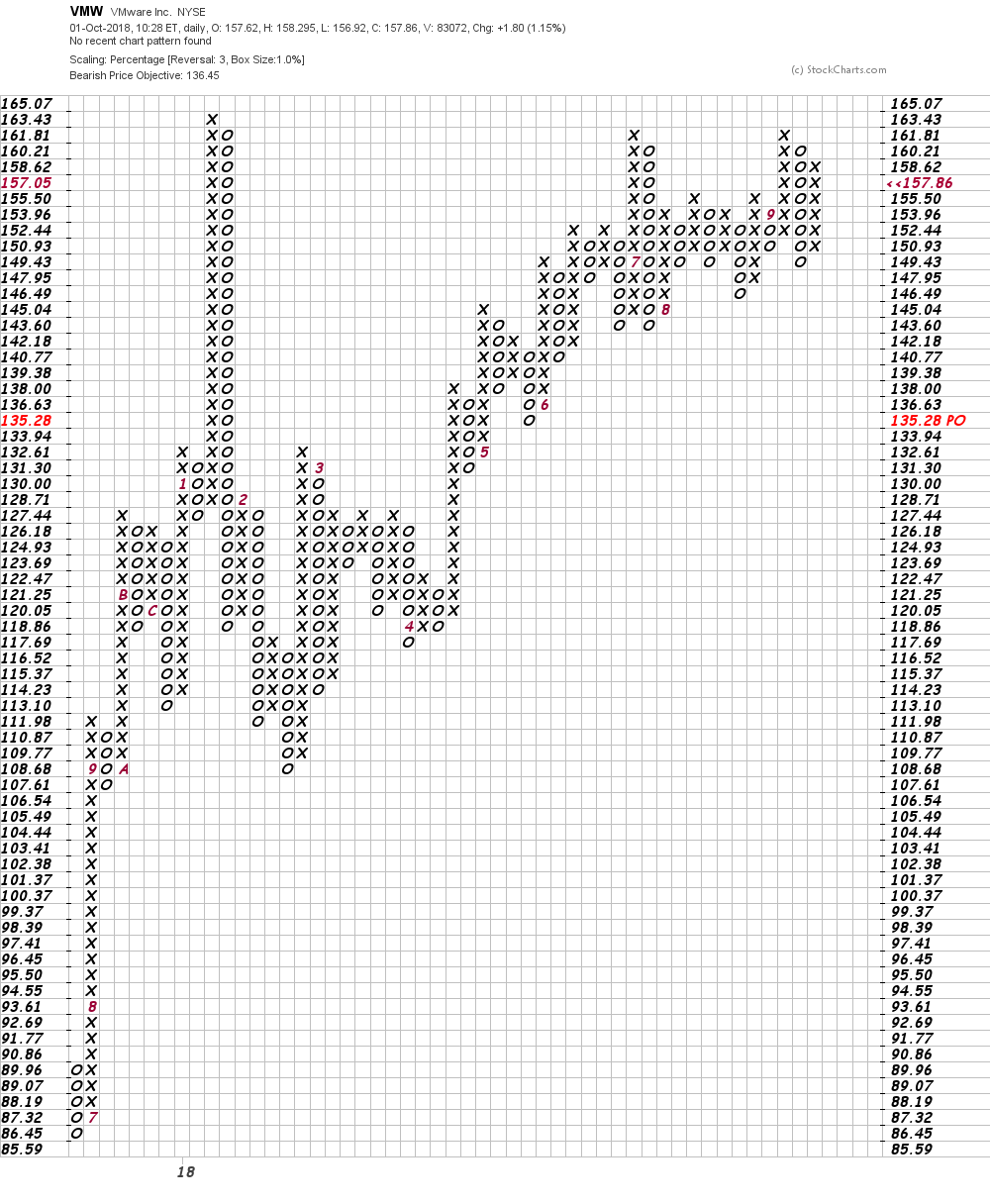 Bottom line strategy: Many technical analysts downplay the importance of volume but I think it needs to be included in the mix and for VMW the rate of increasing volume is a concern.

Traders should consider raising stop protection to $146 as this would mean prices closed below the 50-day moving average line. A close below the 200-day average line around $139 would be a signal to reduce your long exposure.