Monday's 7% gain is the best single-day result the company has posted since April 10, 2015 when the company announced it would sell the bulk of its GE Capital business. For reference, Fast and Furious 7 was still the number one movie in the country at the time.

The end result is actually about half of the stock's high, which reached about 14% on Monday morning amid a spike in trading volume

Making a Negative into a Positive

Executive departures are generally not positive news for major conglomerates, but in GE's case this was just what the doctor ordered. Analysts picked up on the capability of incoming CEO and former long-time Danaher (DHR) CEO Larry Culp as well as the signal that the company's restructuring will accelerate.

Outgoing CEO John Flannery was a much maligned figure at GE as shares have fallen precipitously since his accession. As such, the market reacted enthusiastically as he marked his place as the shortest-tenured GE head in history. 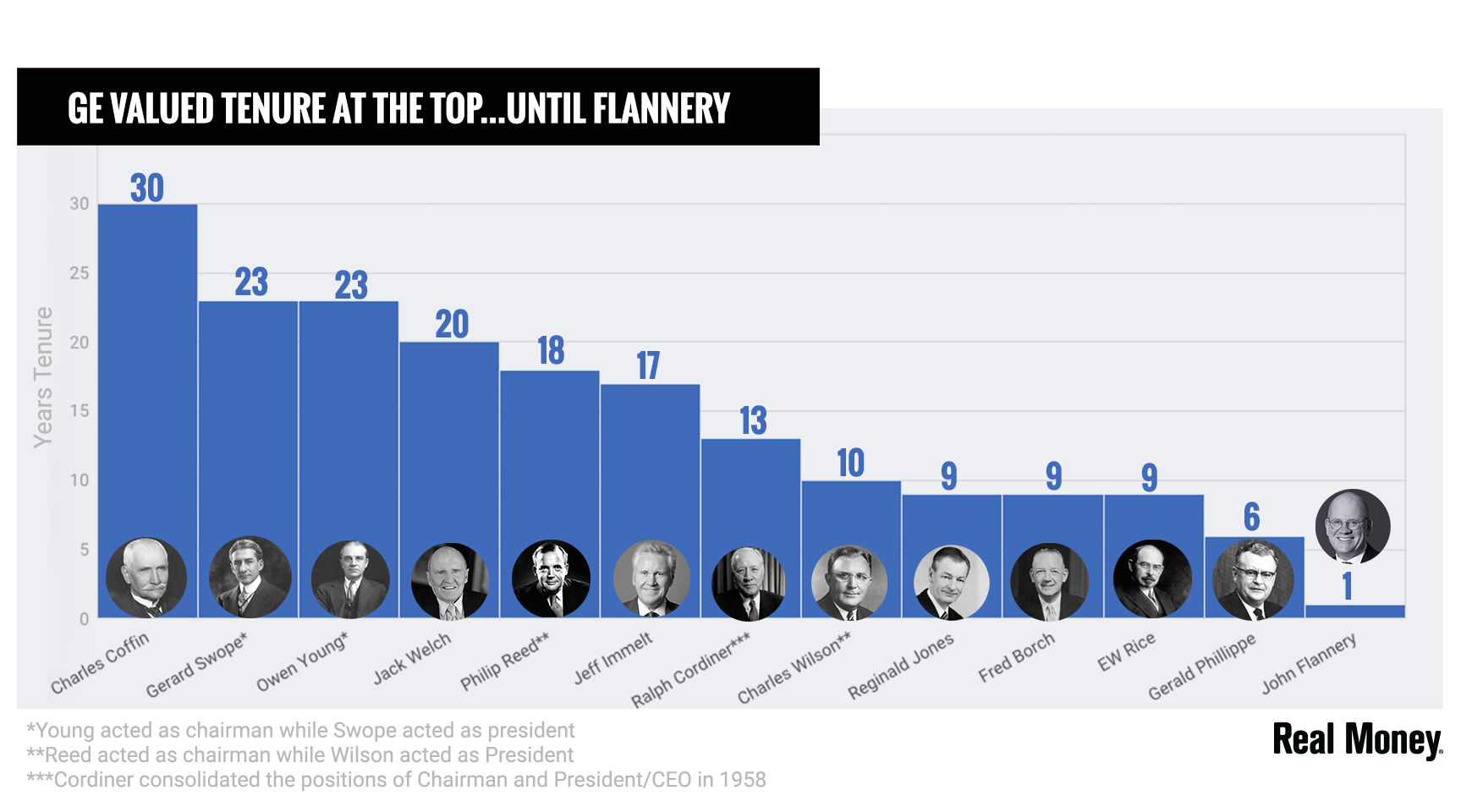 "I think that Culp is a fantastic operator," he said. "It's definitely an opportunity to upgrade when they need it."

Chris Versace, Real Money contributor and chief investment officer at Tematica Research, said this could be the "shot in the arm" the beleaguered company needs.

"GE's new CEO, H. Lawrence Culp Jr., has the experience associated with being a GE board member but also the different perspective honed by his ties to Danaher," he told Real Money. "He very well could be the shot in the arm GE needs, and now we have to wait and see what his 100-day plan is."

Gabelli & Company's research analyst and portfolio manager Justin Bergner said "I like this stock." He added, "I think it trades at a severe discount to private market value and could get close to $20 by year end 2019 in my view."

He said that the assets the company holds and their value outweighs the concerns over credit ratings -- which he is confident can be resolved -- and the major write-down in GE Power, which Bergner believes is already priced into the share price.

"There is tremendous value in the assets that the company holds, given what it trades at," he explained. "I think healthcare and automotive alone would be worth $12 per share."

Not All Negatives are Negated

To be sure, investors and analysts remain cognizant of the downsides at the struggling conglomerate.

Analysts in particular zeroed in debt issues and possible dividend cuts ahead as red flags for investors.

Danaher's "dividend payout ratio had been minimal over [Culp's] time, with businesses that generated plenty of cash," J.P. Morgan wrote in a company note today. "We believe this means a likely material dividend cut as well."

A potential dividend cut would likely be tied to making sure that the company maintains its A2 credit rating, which is vital for the debt-wracked company.

"The significant goodwill write-down suggests that the Power business and its cash flow are not coming back any time soon," J.P. Morgan pointed out. "Ratings agencies have been clear that if this were the case, they would downgrade."

J.P. Morgan maintained an "underweight" rating and a $10 price target given the threat, which is imminent in the firm's view.

"Not only has it been in a downtrend for years but it typically is not very volatile and seldom has sustained upside moves," Real Money contributor James "Rev Shark" DePorre wrote in his column this morning. "It simply is not a very good or interesting trading vehicle and that is not going to change any time soon."

The stock has lost 27.9% year to date, backing up DePorre's point.

As such, some advisors are deciding against jumping on today's news.

"There are still a lot of risks there," Andrew Shoemaker, research associate at Capital Estate Advisors told Real Money. "Honeywell Inc. ( (HON) ) and United Technologies Corporation ( (UTX) ) are much better options in the space for buying opportunities in our opinion."

Whether or not the gains can continue and GE can avoid the bear cases that analysts and experts present, the largely passive shareholder base that GE maintains will be happy with the rare daily jump.

Get an email alert each time I write an article for Real Money. Click the "+Follow" next to my byline to this article.
TAGS: Investing | U.S. Equity | Transportation | Consumer Discretionary | Basic Materials | Technology | Energy

Support from other Indian tycoons helped inch a record secondary stock sale from Adani Enterprises over the line.

Adani Delivers Tome in Response to Short-Sale 'Attack on India'

As the founder slips down the rich list, the Adani Group says Hindenburg Research report is an attack on the very nation of India.