Repetition is the key to learning, but sometimes there is only so much you can learn before repetition becomes useless. I'll give you an example.

In early 2005, my wife gently tapped me on the shoulder to tell me that the crazy heartburn she'd been feeling was a result of what she had suspected for about a week. She was pregnant.

A week later, we headed to see her OB/GYN and received confirmation of the news. The doctor smiled and said, "Congratulations, you're pregnant."

At the first sonogram appointment, the doctor does one of those squinty, sideways looks like you might see a puppy do when hearing a strange sound for the first time and says, "Oh look, there are two babies in here."

Repetition, but with a twist.

The next three appointments can be summarized as this: Yup, you're still pregnant.

Repetition, but nothing new.

And that, my friends, basically sums up the U.S.-China Trade Wars at this stage. We aren't learning anything new although many traders continue to react that way. And for its part, Chinese stocks have greatly underperformed their U.S. counterparts since April 2015. In fact, if we go back over the past five years, we'll see the SPDR S&P 500 ETF (SPY) to iShares China Large-Cap ETF (FXI) ratio is almost twice the level of the low and we're sitting at levels last seen around 2005.

To me, this is an opportunity. We're stretched on the domestic side compared to China. If nothing more than a reversion to the mean trade, the current ratio, as seen by the chart below, indicates there may be some opportunity in a few, small speculative Chinese names. 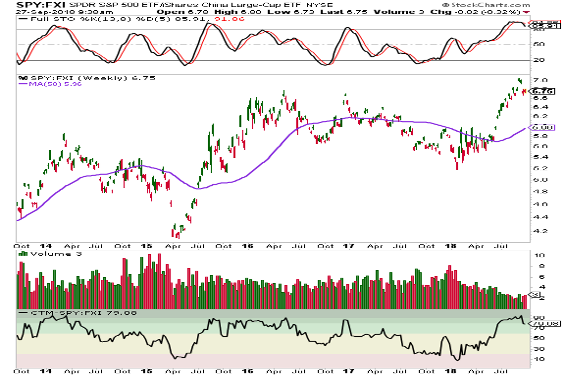 The first reaction by most is to jump at Alibaba (BABA) , but who doesn't own Alibaba now if you wanted Chinese exposure. Next in the pecking order is Baidu (BIDU) . Again, too obvious. Others might tell you to reach for Yum! China YUMC, but this is too vague.

I'd put my speculative list into three tiers from high quality to highly volatile.

This commentary originally appeared on Real Money Pro on Sept. 27. Click here to learn about this dynamic market information service for active traders.