The last time we hitched a ride on J.B. Hunt Transport Services Inc. (JBHT) was back in May, and at that time we found little reason to be a buyer of a stock in a downtrend. Prices bounced in June, pulled back to a higher low and made a higher high into July establishing a new uptrend. Prices did not really get in high gear until the middle of August.

In September prices broke out over their December-February highs as truckers seem to be in high demand. Let's check the latest charts and indicators to see if JBHT has more in the tank or if this trip is extended.

In this updated daily bar chart of JBHT, above, we that the price action from April to August developed into a nice base that has been able to support the current advance. JBHT is above the rising 50-day and the rising 200-day moving average lines. Early this month we can see a bullish golden cross as the 50-day average crossed above the slower-to-react 200-day line.

The On-Balance-Volume (OBV) line has risen from its May nadir and while it has not made new highs it is pointed up, signaling more aggressive buying. In the lower panel is the 12-day momentum study showing equal highs in August and September, which is a bearish divergence to the high price highs.

This weekly bar chart of JBHT, above, is also bullish. Prices are above the rising 40-week moving average line. The weekly OBV line has been strengthening in recent months and the weekly Moving Average Convergence Divergence (MACD) oscillator is clearly in a bullish mode.

One thing to note is that prices are up at the upper end of a two-year upward sloping channel (not shown). Prices can certainly go above the upper end of this channel so I mention it in passing. 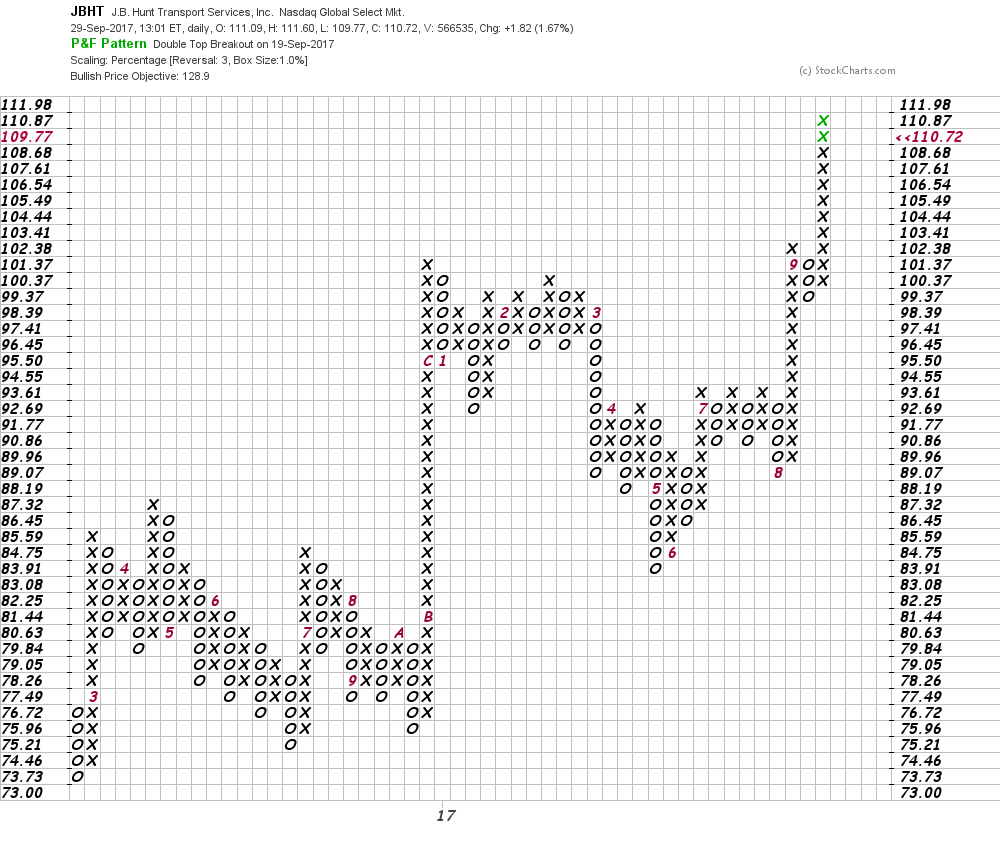 In this Point and Figure chart, above, we can see the selloff into May and June (look for the "5" and the "6" on the chart) and the rally from August ("8"). A $129 potential price target is extrapolated but as noted above prices are reaching the upper end of a channel.

Bottom line: Prices have advanced significantly from their May low. We have a higher price target from our Point and Figure chart but new longs should exercise caution on entering as a pullback could happen in the near term.

It's Tempting to Quit This Portfolio While I'm Waaaay Ahead, but I Won't

The 2021 Tax Loss Selling Recovery Portfolio is killing it, which makes it tempting to shut it down and harvest the profits, but we'll let the experiment roll on.

Can Ford Keep on Truckin'?

We are updating our technical strategy on Ford.

I've seen this pattern on a number of SPACs since February.