Being wrong or taking a loss on a trade doesn't make it a bad trade. Taking losses and being wrong are a necessary part of trading. Those refusing to admit that will find themselves soon looking at a portfolio flush with positions sporting huge losses.

We, as observers, tend to attach a stigma to losing trades. We, as traders, often feel a shame with losing trades. Look around and you'll see it. People, especially those vocal or in the media, are lambasted over losing trades. I'm aware those reminded most of their losers are ones guilty of talking the loudest or rarely posting a loser, but a bad call can haunt a trader for a long, long time. Social media and marketing have removed the incentive to discuss losses and this is flat out the worst outcome possible for both the trader and everyone else. There needs to be the ability to discuss losses without guilt, shame, or ridicule.

I'll provide an example on why this is necessary. I've pulled out two charts here with stark differences, but also an important similarity: Bristol Myers Squibb (BMY) and Acacia Communications (ACIA) . These are two names that have gone in opposite directions since July. BMY has fallen from the highs $70s to the mid $50s, while ACIA has soared to more than $100 from $40. In terms of performance, they have absolutely nothing in common besides extreme moves. Beyond their most recent two-week Full Stochastics indicator, their secondary indicators have also been polar opposites. That's just common sense, but they have a similarity worth considering.

I want you to focus on the support levels of the stocks -- BMY at $55 and ACIA at $100. Both established what would be considered pretty obvious support. A common trade would be a buy on a test of support, whether it be the first touch or the first bounce. This is where being wrong isn't a bad trade and taking a loss if you're wrong should not come with a stigma. Suppose you bought BMY. I'm guilty of that. I bought it yesterday as we tested $55. A close under $55 puts me on the sidelines. I might be willing to give it a second day just to see how the weekly close shapes out and if we close around $54.92, I'm not going to panic and sell. But something around $54.70 or less and I'm wrong on the trade. There's no bounce and support has failed. I would have a loss, although I don't believe it a bad trade. 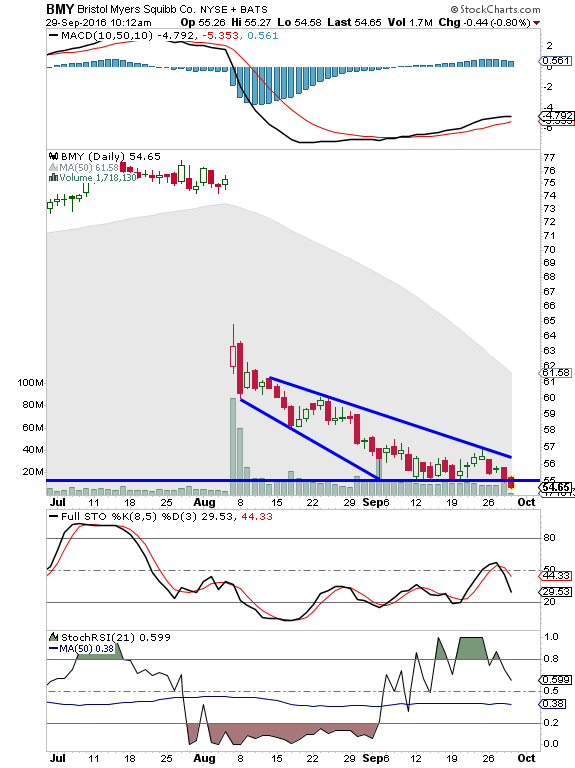 Now let's assume I take the loss. I make the trade known, I take the loss and it's followed with ridicule. That impact is going to have me shy away from trying a buy on ACIA when it tests support. If I let that ridicule turn into shame, then I don't buy ACIA yesterday as it dips below $100, but holds after only giving up a few pennies and starts to rebound. I probably miss out on $2 or $3 or even $4. Furthermore, if I were mocking the trader rather than being the trader, then I'm going to instantly ignore the mention of ACIA because, hell, the BMY trade didn't work. 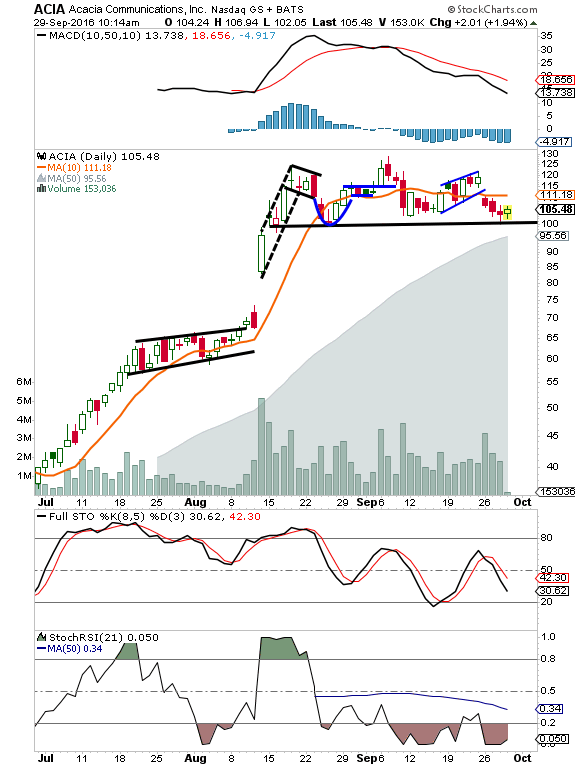 We often treat this as a zero-sum game. It is, but only in theory. Yes, my loss will have to be someone else's gain. But zero-sum games don't often draw millions and millions and millions of players. The odds of your zero-sum game being 100% correlated to the person you're shaming or ridiculed is next to nothing, especially if you are talking about a big stock like BMY or a hot momentum name like ACIA. It's only zero-sum in theory and if you think of it that way, then your ridicule might very well wind up in missed opportunities for both traders, leaving you with ... well, zero.