Curvature Of The Earth

As they say at the NFL draft every year... the banks are on the clock. In precisely fourteen days' time, JP Morgan (JPM) , Citigroup (C) , and Wells Fargo (WFC) will all step up to the plate and report their third-quarter digits. Then, the whole dog and pony show of what we call "earnings season" will follow.

As someone who watches these events closely, and risks his own skin in this game, it does seem that we spend more time focused upon the events of "the season" than we do in between. Unlike some high-profile persons who have spoken on the (de)merits of quarterly reporting, what I will do is stay focused on the mission on hand, and when the time comes... adapt to whatever environment is provided before me.

As for the coming reporting season, estimates are, for the most part, coming in a little. Do not be alarmed by that. That, from my perspective, is quite normal. According to Factset, estimates for S&P 500 Q3 earnings are running at a growth rate of 19.3% year over year. That's down from 19.8% about a month ago.

Earnings quality can be subject to factors such as corporate repurchase programs that create "artificial" shortages of available supply. Couple that with the fact that there are just fewer names present in the public marketplace, and it really should surprise only the greenest of investors that over time, valuations have drifted higher. Using historical valuation metrics that date back beyond just a handful of years is, in my opinion, an exercise in futility.

What is rather incredible is that while the S&P 500 has drifted 9% higher this year, forward-looking valuations have worked their way from 18.3x earlier this year to the 16.9x, which is where they now stand. It makes the action at the point of sale really that much more impressive.

Still, more than earnings that can be engineered to some degree, I like to see revenue growth and projections there are still for 7.5% growth, unchanged from a month ago. That means that analysts are expecting to see a little more margin compression now than they were during those lazy days of summer.

Yes, rising input costs are now a thing. Tighter markets for labor, and materials, as well as rising interest expenses are here. Blame tariffs. Blame the Fed. Or maybe just adapt, because you're a warrior.

Does this mean that we use the normal flow of investor funds that comes over the last two months of the year into the first half of January as a reason to increase the cash portion of our portfolios? Right now, that's actually how I'm thinking. I know, you'd love to hear something concrete on this, but concrete is sold in 80 pound bags. This is money we're talking about. My money. Which means I get to think some more on this. Don't worry. I'll write about it. God willing.

The wisdom to know the difference between the things that one can change, and the things beyond one's control. The Serenity Prayer. If you don't known it, look it up. Friday is the last day of the month -- and of the quarter, gang. You know what that means if you've been around the block more than once.

While the S&P 500 has seen a 9% increase over the year, the index has seen the bulk of that (8%) increase over three months. The index is flat for the month of September, but the three-month performance will force those pension funds with mandates that require re-balancing on a quarterly basis to put pressure on equity markets later on Friday.

It would be more noticeable if the month had also been strong, but you still might see some funky action this afternoon that perplexes a bit. Do not get shaken out of anything that you believe in. There is usually a counter move on Monday morning.

In addition to this, Treasury yields, though somewhat compressed at the long end since the Fed meeting this week, are considerably higher over the same three-month period. There's more. You all know that the fiscal year ends for the Federal government this weekend. You might not know that most mutual funds run on the same fiscal calendar, which means that just about every one of those portfolio managers is in Friday, and every one of them is thinking about what they may or may not need to do in order to put their final touches on annual performance. This is a wildcard, as weaknesses could be random, but it also could possibly act as a counter to the above-mentioned mandates. Funky.

Not Funny At All

This should be funny, but it just is not. Not funny at all. Incredibly, there is more trouble for Tesla (TSLA) CEO Elon Musk. Shares of TSLA plummeted in after-hours trading on Thursday as the U.S. Securities and Exchange Commission sued the famous inventor for the infamous tweet of August 7, where he posted that he was thinking about taking the firm private. The two most highlighted words in what really was a bazaar tweet-storm at the time were the phrase "funding secured." This suit from the SEC comes just two weeks after the U.S. Justice Department opened their own criminal probe into the very same social media posting. So what about this new information?

This suit is seeking to have Elon Musk removed from serving the firm in a leadership role. In fact, according to the Financial Times.. the suit could lead to Mr. Musk being barred from serving in the role of officer or director in any public company.

From the SEC lawsuit itself: "Musk's statement's disseminated via Twitter, falsely indicated that, should he so choose, it was virtually certain that he could take Tesla private at a purchase price that reflected a substantial premium over Tesla stock's then current share price, that funding for this multi-billion dollar transaction had been secured, and that the only contingency was a shareholder vote." Wow. 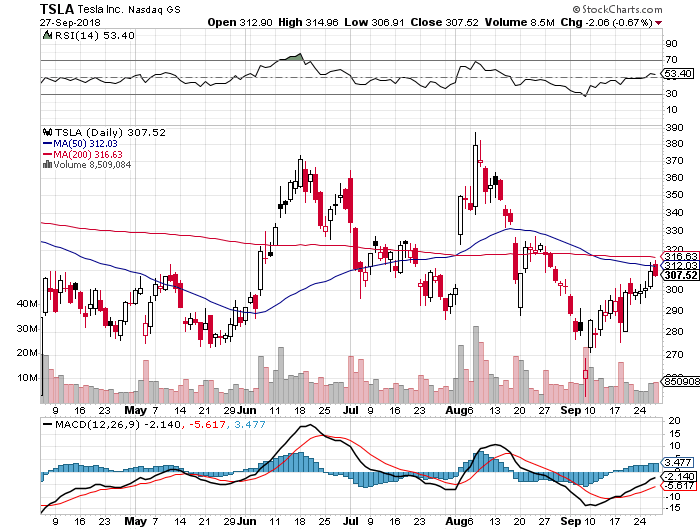 The stock is set to open toward the lower end of the range offered on this six-month chart. You will not catch any markings made by yours truly on this chart at this point. Legal problems cannot be accounted for through technical analysis. As a trader, I would not touch this one with a ten-foot pole or your money. The deal is this. The people that invested in Tesla, really invested in Elon Musk. He's their guy. He's their Batman. They believe in him. They will not be shaken out as easily as I was on my August short position.

The outcome here is everything. If Musk is barred from running this company, as with any sinking ship, the rats will finally flee. However, if there is some kind of monetary settlement between Musk and the SEC leaving him in charge, even with the criminal probe going on in the background, Musk's following will not abandon him.

Bottom Line: You can do what you want. I remain long a few shares of General Motors (GM) , and short an out of the money "Strangle" (puts and calls) expiring toward the end of the year. The trade is profitable.

General Motors is yesterday's car company, you say? Tariffs will crush these guys you say? Maybe. We are past peak autos? Agreed. General Motors trades at established support this morning for the third time in 2018. Either the door gets kicked in, or we see the bounce. Either way, investors will sleep at night. The CEO won't embarrass them.