Thursday night on Jim Cramer's Mad Money program he was joined by Aaron Levie, chairman and CEO at Box Inc. (BOX) . While the revenue expectations sound great I want to pass on the fundamentals and look at the charts and indicators.

I looked at BOX back in June and wrote that, "Aggressive traders could trade Box from the long side but I would prefer to buy strength risking below $24 looking for longer-term gains to the $44 area." With hindsight I can see that we would have been stopped out with a loss at the end of July.

In the daily bar chart of BOX, below, we can see a very "uneven" trading pattern the past 12 months. There was a good rally from early March to June but for the most part the up and downs were hard to deal with even for a buy and hold investor. Prices made a peak in June and have made a stair-step lower to test the rising 200-day moving average line several times this month.

The daily On-Balance-Volume (OBV) line shows a rise from May to early September and then a slow decline. Normally a rising OBV line is bullish but that has not translated into rising prices. If buyers of BOX have been more aggressive as prices have declined that could mean they are longer-term bulls on the company or it could mean we will see a bigger decline ahead if they liquidate. Time will tell.

In the lower panel is the 12-day price momentum study, which shows a rising pattern or slowing momentum as prices have declined from August. This bullish divergence might give prices a lift, but again time will tell.

In the weekly bar chart of BOX, below, we can see an uptrend from the middle of 2016 around $10 to the mid-to upper-$20s this year. The 40-week moving average line is still pointed up but it is being tested this month.

The weekly OBV line shows a much different and bearish pattern than the daily OBV line. Here the OBV has moved sharply lower the past five months suggesting that sellers of BOX have been very aggressive.

The trend-following Moving Average Convergence Divergence (MACD) oscillator has been in a take profits sell mode for three months.

In this Point and Figure chart of BOX, below, we can see a downside price target of $19 being projected. 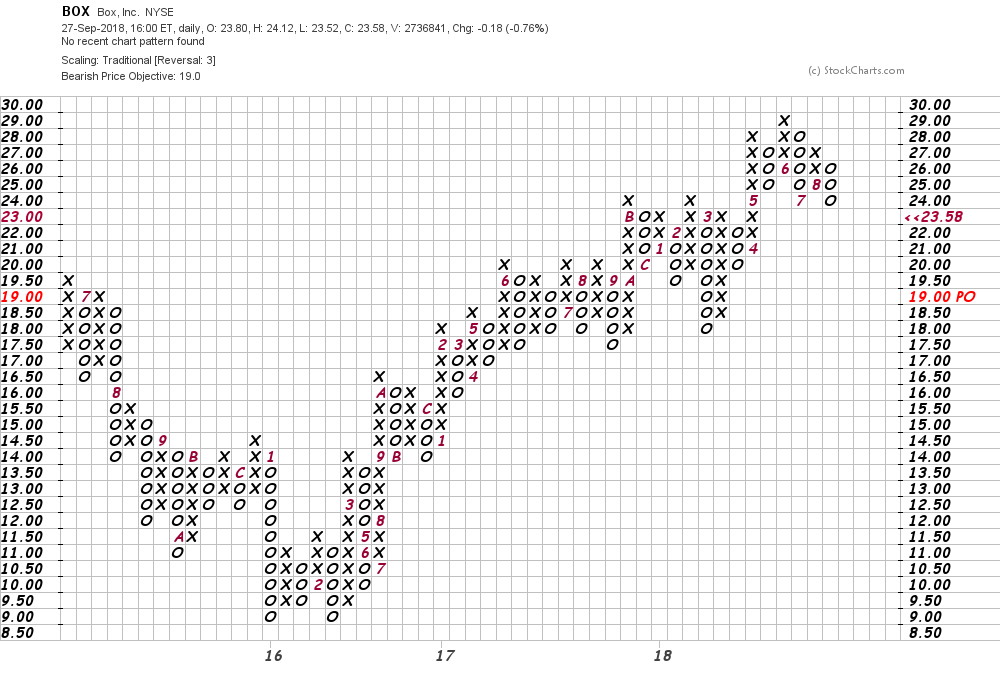 Bottom-line strategy: The long side of BOX looks risky with a downside target of $19 possible. Prices could bounce in the near-term but the upside does not seem promising. I would look for trading opportunities elsewhere.

A Big Picture Look at Tech Stocks and Treasuries

Trends spanning over several months can be thwarted by a trend that spans over years.