It can be hard to resist the temptation of being a hero. You see a stock that continues to run and think, "This is it. It's the top." Or perhaps, you prefer the other side -- thinking, "this stock can't possibly go any lower." Often when I talk about this concept, we are discussing a smaller stock that's getting squeezed, or pummelled. Twilio (TWLO) and Acacia Communications (ACIA) are two more recent ones that come to mind. But when you look at names like Amazon (AMZN) and American Eagle Outfitters (AEO) , they don't fit the mould of TWLO or ACIA.

Amazon is 50X to 100x greater in terms of market cap than either TWLO or ACIA. AEO runs in the retail space. While we have some volatility in the retail sector, it isn't often mentioned in the same breath as technology or the online space. One could argue that Growth Seeker holding AMZN is retail as well, but it has morphed into its own beast, of sorts. 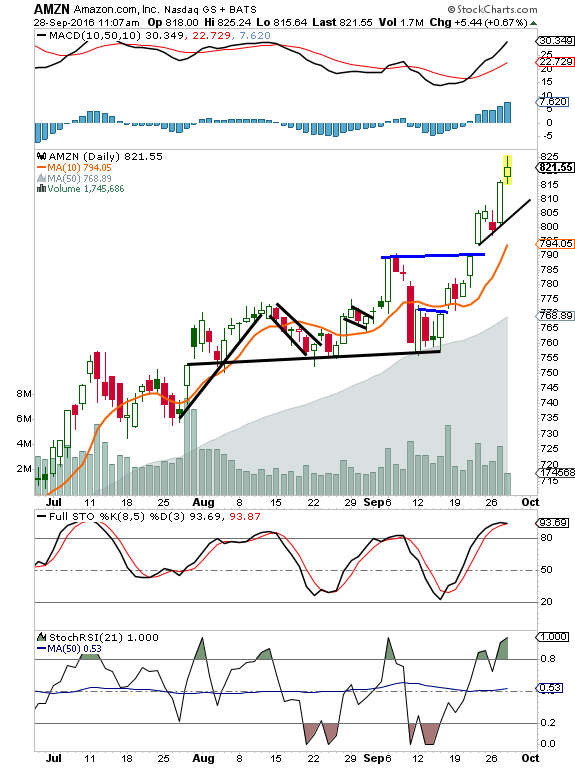 The initial though for many is to short Amazon here. It may look like it has gone too far, too fast, but this isn't a fly by night operation. It's not untested. It's not unproven. Is it overvalued? On traditional metrics, yes, but Amazon has been anything but traditional.

You may hate technicals, but there has been nothing in AMZN's chart advocating a short. It continues to climb. If you want a trigger, then watch for the Full Stochastics to rollover here, and the black line to cross under the red. It's been a winning trade, but with wins far smaller than what buyers have seen on breakouts above resistance and out of flag. However, shorting strength has rarely worked in this market. Don't try to be that trader who believes they can change it themselves. No sense in trying to catch a top.

The flip side could be said about AEO. Don't be the trader who tries to support it by buying every downtick. The stock is broken and looks like it is headed to $17.25, at least. It's very possible it won't find support until $16.25. That's not the technical uncertainty you want to buy.

While I might argue $17.25 is a support, I'd find it difficult to label it a clear stop. I'd say that for $15.50, which is way too low for me to consider a trade. The stock is under both the 10-day and 50-day simple moving averages, and secondary indicators show no bullish divergences or even any slowing in their descent. Back away from the stock. 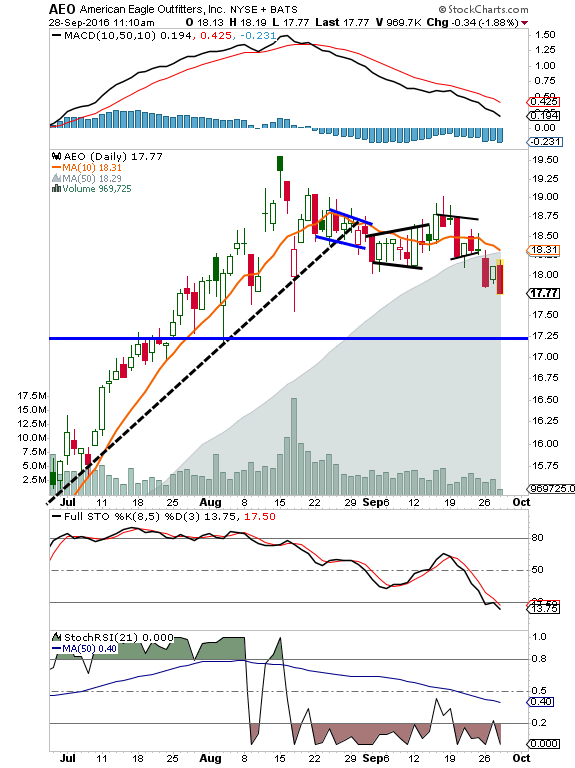 I often hear the cliche, "It takes a village," and it's true in trading, but most of us are trading on our own -- and not with a village. Remember that next time you think you can stop a train by yourself or lift a mountain of selling pressure off a stock. It rarely ends well. Wait for a better opportunity.

Get an email alert each time I write an article for Real Money. Click the "+Follow" next to my byline to this article.
TAGS: Investing | U.S. Equity | Consumer Discretionary | Consumer Staples | Technology | Telecom Services