Equity markets, though not exactly roaring, were in fact working their way higher. The Dow Jones Industrial Average closed down 106 points for the day on Wednesday. Fact is that the blue chip index gave up a rough 250 points plus over the day's last 100 minutes or so. That's not insignificant.

Speaking of what might be significant, In his press conference, Fed Chair Jerome Powell tried to downplay the significance of the change made to the official statement. The FOMC's September 26 statement looks something like a "cut and paste" replica of the August 1 statement -- with two key exceptions. First, the rate hike. Second, dropping off the phrase, "The stance of monetary policy remains accommodative."

Why? Perhaps it was really nothing, as the Chair tried to explain. Perhaps it is simply because the central bank no longer considers its path to be very accommodative. This, my friends was not missed on keyword seeking algorithms, and that is why momentum grew as markets sold off in response.

Some will make note of the fact that the Fed had not implemented a September rate hike since before the financial crisis. So what? Until March of 2017, only the month of December (twice) had seen any rate hikes at all since the year 2006. So there goes another meaningless statistic. Kind of like saying that a football team does poorly in games where they fail to convert on third down. No kidding.

Now off we go, in search of the mythical neutral rate -- that magical interest rate that is neither accommodative, nor restrictive. Rarer than Sasquatch. That brings me to my next topic. The dot plot.

Monkey With a Machine Gun

Have you taken a gander at the economic projections made by our esteemed pals at the Federal Reserve Bank? Some of these folks really should not be allowed near anything important. Real GDP expectations for 2018 have ramped up to 3.1% from just 2.8% three months ago. Expectations for Unemployment, Inflation and the Fed Funds Rate all remained rather stable. By the way, they intend to hike again in December. You can likely stick that feather in your cap and call it whatever you like.

Once these mavens peer into our future, the fog sets in and the path becomes not just unclear, but for some of these clowns, quite farcical. My favorite is the following. The median expectation among the group for real GDP in the year 2021 is 1.8%. The high end of the range for that item in 2021 is a mere 2.1%.

Apparently, not a single fortune teller at the Fed sees even the slightest chance over the next three plus years that Unemployment will return to higher levels, or that consumer level inflation will rear it's ugly head. Yet, pals of mine, at least one sees a Fed Funds Rate in 2021 that reaches 4.1%, and the median expectation for the Fed Funds Rate is 3.4% (by 2020).

What does this mean? To me, this simply means that even though not pressured to do so by rising inflation, and the rate of economic growth being nearly cut in half over the next three years, this economic "think tank" expects to keep on raising rates to almost ridiculous levels. They also expect Unemployment to remain almost precisely where it is even if GDP slows dramatically.

To the group's credit, there are plenty of dots in realistic places. But can maybe the sentient beings at the Fed perhaps help the ones who are obviously in way beyond their depth when it comes to understanding data and turning it into meaningful policy. After all, it's not like they can impact the lives of literally every American citizen or something.

By the way... my thought is that if the Fed Funds Rate is 4.1% in three years, it will be dragged there by a lack of demand for U.S. sovereign debt across a broad array of maturities. That would be a sad tale that I'll leave for another day.

A few months ago, I realized that my bathroom rug was disgusting. I have another bathroom. So, I poked my head in there. Yup. Two disgusting bathroom rugs. Not being the type who sits around waiting for someone else to do anything, I figured I'd head to the store to buy two bathroom rugs. I checked the mailbox on the way out. Voila! Staring me right in the face was a 20% off coupon good at any Bed Bath & Beyond (BBBY) . Off I went.

Arriving at my destination, I find the place somewhat unorganized, but I push on. FYI, guys my age still go to stores. The internet is good for when you just can't find what you need.

I find the bathroom rug area. Plenty of stock on the shelves. No price tags... on anything. I look for an employee. No dice. The only one I can find is at the register -- who is visibly upset, as are the sad folks in her line. I ask a miserable-looking fellow shopper. That shopper tells me that the place is always unorganized and you never know what you might pay until you get to the register. I ask here why she shops there. She says "good point". She calls to her friend shopping in a different aisle. The three of us leave together. I drive to a nearby Walmart (WMT)  and buy two bathroom rugs. Those rugs still sit lie upon my two bathroom floors.

After the closing bell stopped ringing on Wednesday evening, Bed Bath & Beyond reported its second-quarter results. By now, you likely know that they badly missed expectations for earnings per share, as well as for revenue -- a revenue print that failed to even grow year over year, despite conditions for retailers that have shown improvement from where they were last year.

The firm reported comparable sales that retreated 0.6% year over year versus a consensus expectation of 0.4% growth. Operating profit and revenue also missed their marks. Expenses? Oh, those are growing just fine.

So execution is poor, we get that. How about the future, can they turn this thing around? Hmm. Management is now guiding net EPS toward the low end of expectations for the full year. The firm also states that it is on plan to "moderate" ongoing declines in both earnings and operating profits. Leadership thinks that they can show EPS growth by 2020. Peachy.

I can't say that the reduction in comparable sales surprised me at all, if the one location near my home is indicative in any way of the chain as whole. When I told my wife of my experience later that night, she told me I was crazy to even try to go there. 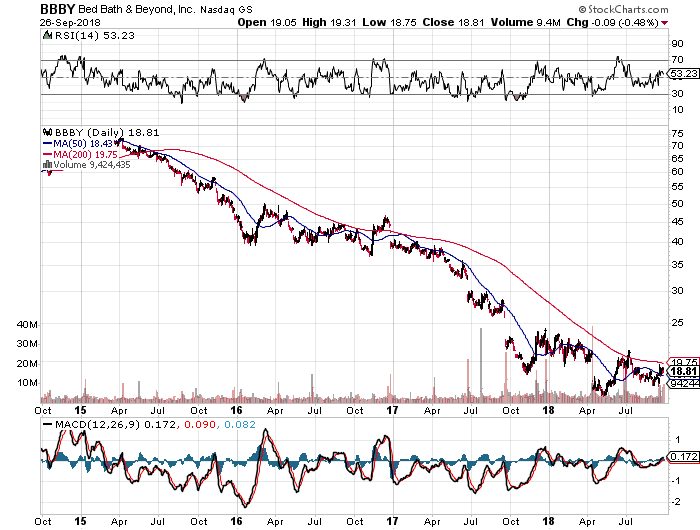 With Winter on the way, I know some you outdoorsy types will appreciate this slope. The stock might bounce off of these awful levels, but I won't be buying these shares.

Top Seven Reasons I Will Not Buy BBBY Today

1) My in-store experience was awful.

2) Earnings growth is a train wreck and not expected to grow anytime soon.

5) I am already long General Electric (GE) . One risk management crisis at a time.

6) My wife's opinion is important to me.

7) I'd rather buy a sandwich, a cola and ride the subway twice.

Get an email alert each time I write an article for Real Money. Click the "+Follow" next to my byline to this article.
TAGS: Regulation | Earnings | Economic Data | Economy | Investing | Markets | Politics | Stocks | Financial Services | U.S. Equity | Newsletter