Alphabet, Inc.'s (GOOG) lows in the past week, and a momentary dip today, offer an opportunity for investors.

On the day of a Senate hearing wherein Google's data privacy chief Keith Enright was called to testify on the company's privacy policies ahead of a reported meeting between legislators and CEO Sundar Pichai on Friday, Google stock encountered some trouble. A tumultuous month of news has brought shares down from about $1265 at the end of August to a close of "just" $1159.83 on September 17.

The stock further encountered some problems today as the stock hit a low of $1186.27 as the senate hearing began. However, as the hearing progressed, declining 0.2% as of 3:51 p.m. in New York.

"Someone used the price weakness to come in and buy," Real Money technical analyst Bruce Kamich wrote in his explanation of price action this morning.

He added his own advice that buying on the lower points available today was wise.

"The recent price action and the improvement in the shorter-term indicators suggest that GOOGL will try the upside again," he indicated. "Traders could probe the long side on strength above $1,208."

Another piece of rationale for buying opportunity is the fact that Google has shrugged off even no-shows to senate scrutiny.

The company has not garnered the same degree of senate attention as companies like Facebook, Inc. (FB) and Twittter, Inc. (TWTR) , and has further showed much less price sensitivity than those companies, which are largely resilient still, to the hearings.

Essentially, there is bad press for the company this week as it comes forth with mea culpas and obediently awaits a slap on the wrist, but this is not material to the trajectory of the stock. 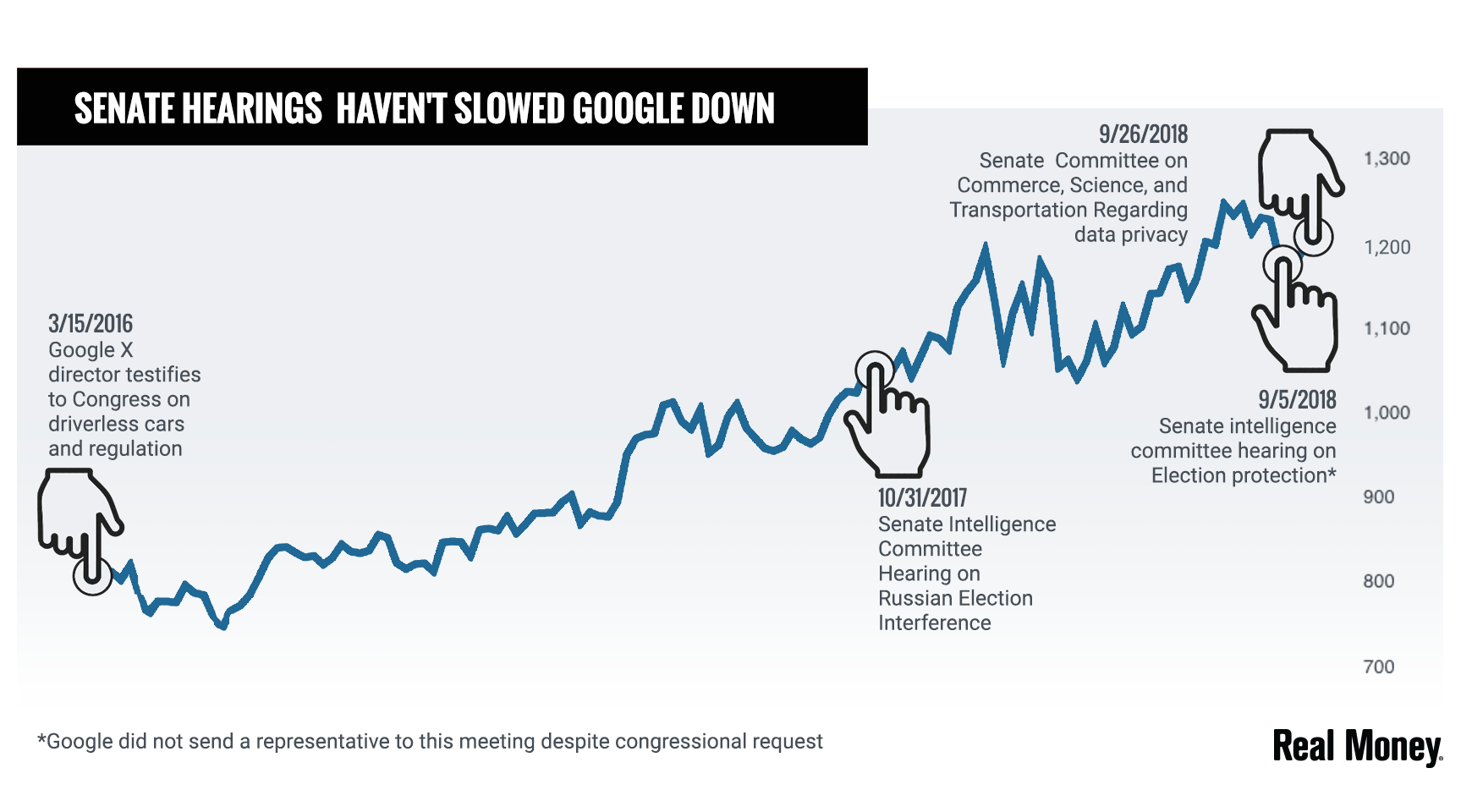 Even Real Money contributor James "Rev Shark" DePorre, who said he does not see a trade at the moment, was confident in the long term buying opportunity for the media and tech giant.

"Unless Alphabet management really blunders, the stock is probably a buy on weakness," he concluded, summing up the nature of the wildly successful company.

Get an email alert each time I write an article for Real Money. Click the "+Follow" next to my byline to this article.
TAGS: U.S. Equity | Investing

The S&P 500 Could Be Forming a Potential Top Signal

October Rebound, Pricing In the Past, Tesla Hertz So Good, Space, Facebook Q&A

Markets are pricing in some fiscal policy, but it's not what a lot of pundits think.

Insiders have been using recent market strength to lighten up.