I ran track in high school. I ran competitively after high school. In fact. many decades later, I still run, occasionally earning a medal in my age group if, by chance, the field is a little weak that day. I was never a sprinter and I never ran the hurdles, but I have always marveled at just how good Edwin Moses was, and just how consistent a competitor he was in his prime. Moses ran the 400 meter hurdles. He won Olympic gold in 1976 (Montreal), as well as 1984 in Los Angeles. You might recall that the 1980 Summer Olympiad was held in Moscow. The U.S. did not participate. Between 1977 and 1987, Moses won 122 consecutive races in his event. Owing to his long-term level of success, Edwin Moses stands among the greatest track and field athletes of all time.

This morning (you might call it night), as I peruse the barrage of numbers that I look at every morning before I game-plan my day, I notice the U.S. 30-year bond. That slice of Americana spiked to yields that approached 3.25% at 4 a.m. ET and again nearly an hour later, just falling short on both attempts. There's no doubt that the yield curve has steepened this month, giving traditional bankers something of a break. It was Double Line Capital's Jeffrey Gundlach who considered a close above 3% for the U.S. 10-year note coupled with a close above 3.25% for that 30-year -- and what it might mean for our marketplace. According to the Financial Times, "Game Changer" was the term Gundlach used. Well, we are now this >< close.

Chances are, in my opinion, that markets are anticipating something a little different from Fed Chair Jerome Powell at tomorrow's post-FOMC announcement press conference. Will there be much of a change in policy beyond the expected increase for the Fed Funds Rate up to a range of 2% to 2.25%? No, I don't think so.

The dot plot may offer us something different, albeit just slightly so. I think it will be from the presentation that traders and investors alike take their cue. Other than an overt and over the top message to the markets that 2019 might be an aggressive year for the central bank, there may just be something said regarding confidence in the trajectory for U.S. economic growth, and/or rising input costs now facing American business. You know that I have become a little more dovish as time has passed. I don't have a say here. Ever been to a deserted beach just before a major storm? Enjoy Tuesday, gang.

The internet defines hors d'oeuvres as small dishes served before a meal. Well, Lah-di-dah. Okay with you if I just call them appetizers? Good. Thanks. Show of hands... How many of you notice the appetizer that Boeing (BA) wolfed down yesterday?

This is the deal. The U.S. Air Force needs new helicopters to protect nuclear missile bases. Somehow, someway, the Air Force was still using UH-1N Hueys for this mission. FYI, Hueys are Vietnam era aircraft that almost all vets have some affinity for. Black Hawks, though a superior aircraft, just don't make the same "Whomp whomp" noise, nor sport those support rails that one can stand on when about to do the skedaddle.

Yesterday, the Pentagon awarded Boeing and Leonardo SpA a $376 million contract to replace those aged Hueys with a version of Leonardo's AW139 chopper. According to the Wall Street Journal, this deal is only for four helicopters, but the Air Force ultimately wants to buy 84 of these birds -- and that could eventually, over years, bring the deal up to a potential $2.4 billion altogether. Lockheed Martin (LMT) was a loser in this round, but Lockheed will not be losing too much hope just yet. As I mentioned, this was just the appetizer.

The Air Force has some money to spend and they are running out of time to spend it. The fiscal year for the Federal government runs out the clock this weekend, and all expectations are that the U.S. Air Force will award their T-X trainer jet contract sometime this week. The Air Force needs to replace Northrop Grumman's (NOC) tired T-38 trainer, and apparently has a beefy $16 billion to spend on up to 350 such aircraft. Northrop Grumman is not considered in contention to provide this new aircraft. Keep in mind, it's not just the $16 billion in question... it's also the follow on business from U.S. client states.

Most industry watchers have narrowed potential winners for this contract down to two possibilities. There is the T-50A, which is a joint venture between Lockheed Martin and Korea Aerospace Industries. The first generation T-50 has been in use in Korea for a number of years already, and the T-50A could be ready for delivery by the year 2022.

Boeing also has a dog in this fight. Boeing is collaborating with Saab to put together a new trainer aircraft that might be further away from delivery than what Lockheed is offering, but this plane will come with a cockpit that would have the ability to mimic for the pilot being trained multiple different U.S. fighter planes that a pilot may in his or her career end up flying. To me, that sounds incredible.

This obviously lucrative contract will be awarded by Friday, and will come down to Air Force preference. Either they choose higher tech, and an unknown delivery date, or they choose a more-knowable option in terms of expense as well as delivery. There will be a winner and a loser here. My choice is to stay long them both. Can't lose? We'll find out.

The Sausage King of Chicago

Salesforce (CRM) has long been a Sarge fave. If you read me often, then you already know that. Ever see the 1980s classic film "Ferris Bueller's Day Off?" Remember the "Sausage King of Chicago?" While that sounds like quite a prestigious title, I think a title along the lines of "the Subscription Model King of Cloud-based Commerce" might be nice too. In fact, if memory serves... our own Jim Cramer had already thought of that, when he included Salesforce among his elite group, simply to be known as "the Cloud Kings." This group of seven would include not just Salesforce, but arch rival Adobe (ADBE) , Red Hat (RHT) , Splunk (SPLK) , VMWare (VMW)  and ServiceNow (NOW) .

Just in case you have been out in the wilderness, or attempting to cross the Atlantic Ocean by yourself in a canoe, Tuesday kicks off the massive Salesforce tech conference in San Francisco known simply as "Dreamforce." On the surface, the business of Salesforce is to provide for, or handle for its clients, the necessary organizational skills, sales operations, customer relations, marketing and e-commerce abilities needed to compete in the modern marketplace.

Within this four-day conference is to be the firm's own investor day. That happens tomorrow, after the closing bell for equity markets rings in New York. The big story this year was to be the integration of Mulesoft. This will enhance the ability of Salesforce to aid clientele trying to integrate new tools onto older platforms. Huzzah. Like I said, Mulesoft was to be the main event, but now I am not so sure.

You likely noticed that ahead of the whole event, Salesforce and Apple (AAPL) announced a partnership that sent shares of both stocks significantly higher on Monday. The two giants will develop together software that will provide businesses greater ease in the writing of applications for Apple mobile devices that will run on the Salesforce cloud. Interesting.

Chart of The Day: Salesforce 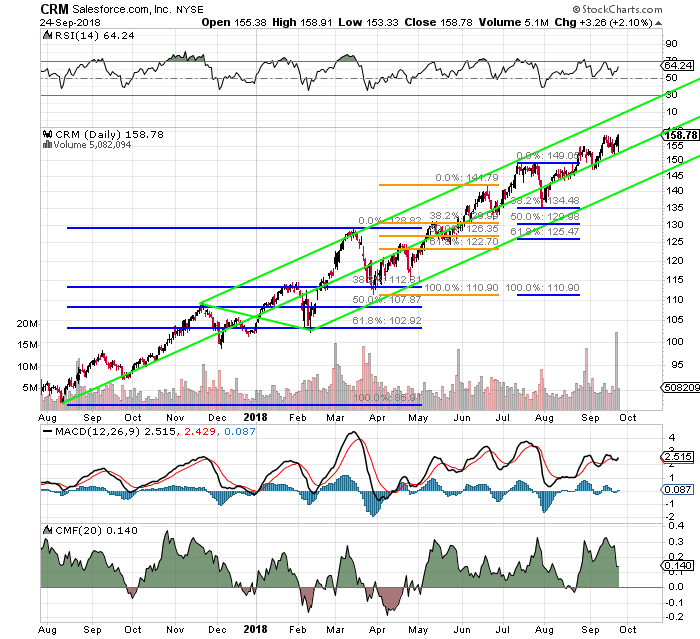 I bet you can recall this chart. I drag an updated version of it out every month or two just to show how darned consistent a performer Salesforce actually is. Kind of like Edwin Moses. One easily sees that while most of the rest of the cloud has, at times in recent weeks, hit some growing pains, this train just stays on time. As we head into the big event in San Francisco, Relative Strength, Money Flow, and the daily Moving Average Convergence Divergence all seem to be rowing the boat in the same direction.

The Pitchfork model, that now dates back more than a year, remains intact. As a matter of fact, that central trend line has morphed from pivot into support since early August, likely breathing extended life into this model. On a side note, I really can't believe how rarely I see Andrews' Pitchfork models used for analysis these days across the industry. As some one who trades the names I write about, there is no denying their usefulness. I won't judge. At least not publicly.

I would not advise this strategy for those flat the shares. For those looking to possibly enter at a discount, or just pay for a nice dinner with a pal... November 16 $145 puts still paid $1.67 last night, meaning that even if the trader were forced to own the shares going into earnings, that this trader's net basis cost would be just $143.33.

Get an email alert each time I write an article for Real Money. Click the "+Follow" next to my byline to this article.
TAGS: Investing | U.S. Equity | Economic Data | Earnings | Economy | How-to | Markets | Newsletter | Politics | Stocks

What Lies in Store for the Market in the First Quarter of 2021?

It's easy to get caught up in the inflation trade, but it's also important to know how best to play that.

Plus, a preview of the coming Consumer Electronics Show and quick news hits on Micron and Boeing.

I see both Tuesday and Wednesday on into the end of the week as potentially very volatile for financial markets.