We have some sloppy trading this morning with the DJIA leading, the Nasdaq lagging and the S&P500 flat. Breadth is positive and new 12-month lows and highs are about even.

What is most notable on my screens are some pockets of strength in small-caps. The cannabis stocks bounced with Canopy Growth (CGC) having the best-looking chart of the bunch. Some biotechnology names such as Amarin (AMRN) are doing well and then Intelsat I, which I mentioned Monday, is coming out of an attractive consolidation pattern. Small oils like W&T Offshore (WTI) continue to do well. Also my stock of the week, Bank of America (BAC) , is setting up well into the Fed news Wednesday.

There is some decent action, but the indices are mixed, seasonality negative and the impending interest-rate announcement Wednesday is likely to keep things contained. There isn't any reason to anticipate significant downside but there isn't much that is forecasting a big upside move either.

The FAANG names led the market Monday but they are mixed Tuesday with Facebook (FB) being the primary laggard. Facebook announced that the co-founders of its Instagram division are leaving. No specific explanation is being given for the resignations but the market tends to assume there is a negative reason when high level executives suddenly depart.

Facebook has been struggling since its earnings report back in July and that is probably contributing to the negative reaction Tuesday. This is a stock that is trying to find support but has not been able to generate any positive momentum for months. The news about the Instagram departures may turn out to be meaningless but the market is in no mood to make that assumption with a stock acting as poorly as Facebook. 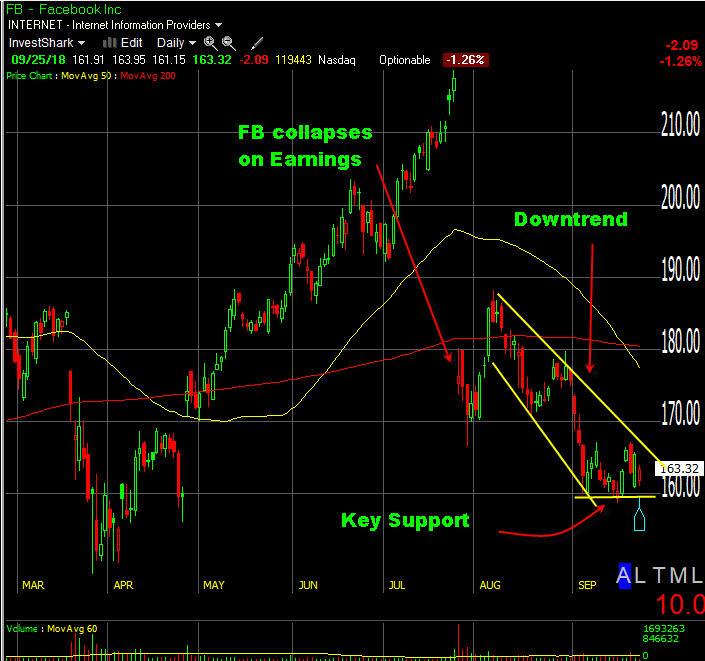 There is some support around $159 on the chart, above, and if you are inclined to bottom fish that would be the natural stop-out point. The problem with buying Facebook here is that there isn't anything to indicate that upside momentum is about to resume. The stock is battling both negative sentiment and a weak chart. Any money parked in Facebook is likely to be dead for a while.

Facebook is a holding in Jim Cramer's Action Alerts PLUS Charitable Trust Portfolio. Want to be alerted before Cramer buys or sells FB? Learn more now.