Comcast Corp. (CMCSA) has been in the headlines as it won the bidding war for a big chunk of British television company Sky. Fundamental analysts will be going over the numbers and their spreadsheets for days, but the stock sold off sharply on Monday. Comcast did other large deals in 2001 and 2009, both with positive results according to our own Jim Cramer, whose Action Alerts PLUS charitable trust owns the stock and who discussed the company Monday on "Mad Money." Financial analysis is over my pay grade, so I will just look at the charts and indicators this morning.

In this daily bar chart of CMCSA, below, we can see the price action of the past 12 months. There is a decline from $44 in January to below $31 in May followed by a recovery to $38 before yesterday's gap to the downside. Volume was heavier and prices closed below the flat 200-day moving average line and the rising 50-day line. There is chart support in the $35 area and prices closed around the middle of the range on Monday, telling us that bulls and bears were in rough balance.

The daily On-Balance-Volume (OBV) line rose in June and July and then turned flat the past two months. The Moving Average Convergence Divergence (MACD) oscillator has been above the zero line from June.

In this weekly bar chart of CMCSA, below, we can a two-year rally from early 2016 to 2018 followed by correction. Prices are below the flat 40-week moving average line but we still have four days to go in the week. The weekly OBV line follows the price action up and down. The weekly MACD oscillator signaled a cover-shorts buy in June and is now above the zero line for an outright go-long signal.

In this Point and Figure chart of CMCSA, below, we can see Monday's decline without a price gap (column of "O's"). Prices are back to a potential support zone and an upside target is still shown -- $40.26. 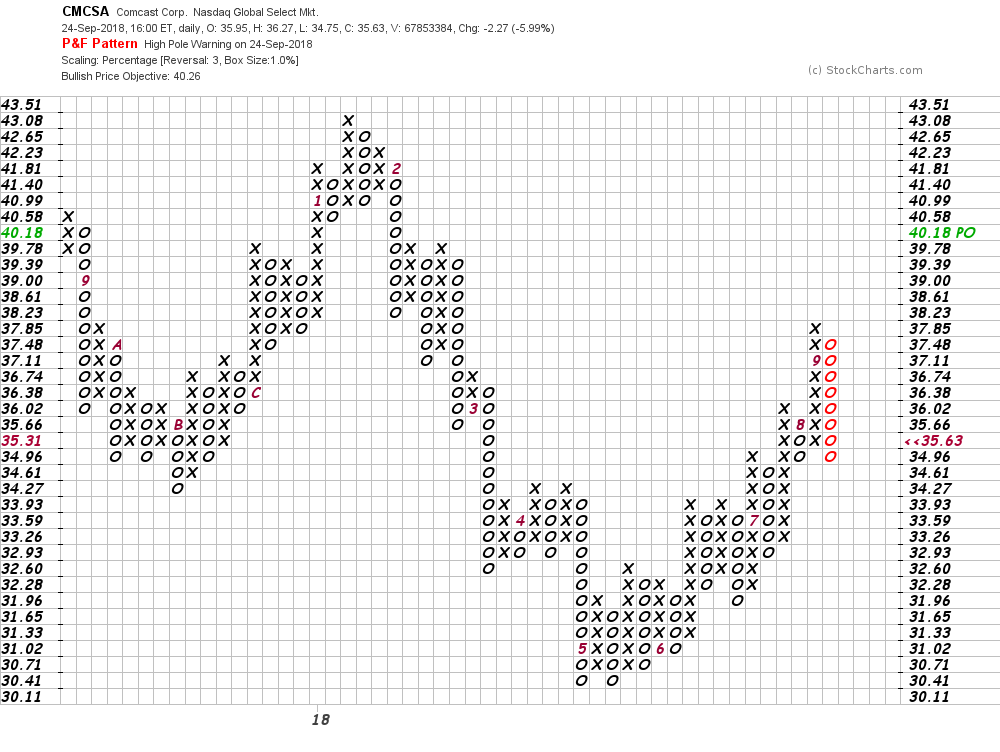 Bottom line strategy: Since the May low CMCSA has seen a number of other sharp dips, and each dip was followed by renewed strength. I suspect the current price weakness will not start a new decline, but it is more likely we see a period of sideways trading before further gains develop.

Get an email alert each time I write an article for Real Money. Click the "+Follow" next to my byline to this article.
TAGS: Investing | U.S. Equity | Technology | Consumer Discretionary | Entertainment | How-to | Mad Money | Mergers and Acquisitions | Risk Management | Stocks

Let's look at this stock's rise compared with Qualcomm in 1999 and even Tesla now.