We have not checked in with the charts and indicators for Transocean (RIG) for a year, and the last time we said: "A dip into the $9 to $8 area on RIG could be bought, as much of the selling seems to be exhausted, but a longer sideways period is likely to follow. Investors will have to be very patient before we see a breakout over the $13 resistance level."

With 20/20 hindsight, we can see that strategy would have been profitable as prices re-based around $9 and finally rallied to $16 in the fourth quarter of 2016.

After a peak last January, RIG declined to near $7 before a reversal. Prices look set to rally more in the weeks ahead, but let's review our charts and indicators to plot a new strategy.

In this updated daily bar chart of RIG, above, we can see a turnaround from June. Prices started to stabilize then, and even though prices made a lower low in August, the indicators did not confirm. Prices have broken above the August highs to signal a short-term uptrend.

RIG is above the rising 50-day moving average line but still below the declining 200-day average line. The On-Balance-Volume (OBV) line declined from January to June but it has moved sideways since then. When prices made a new low for the move down in August, the OBV line did not make a new low, suggesting that selling pressure had dried up. The OBV line has since broken out on the upside, matching and confirming the price advance so far. A bullish divergence from June to August foreshadowed the rally.

The 12-day momentum study made higher lows from June to August while prices made lower lows. The divergence tells you the rate of decline had slowed and this can foreshadow a reversal to the upside.

In this weekly bar chart of RIG, above, we can see a mixed picture. Prices are below the declining 40-week moving average line. The weekly OBV line has risen since early July, signaling more aggressive buying. The weekly Moving Average Convergence Divergence (MACD) oscillator has crossed to the upside from below the zero line for a cover-shorts buy signal. 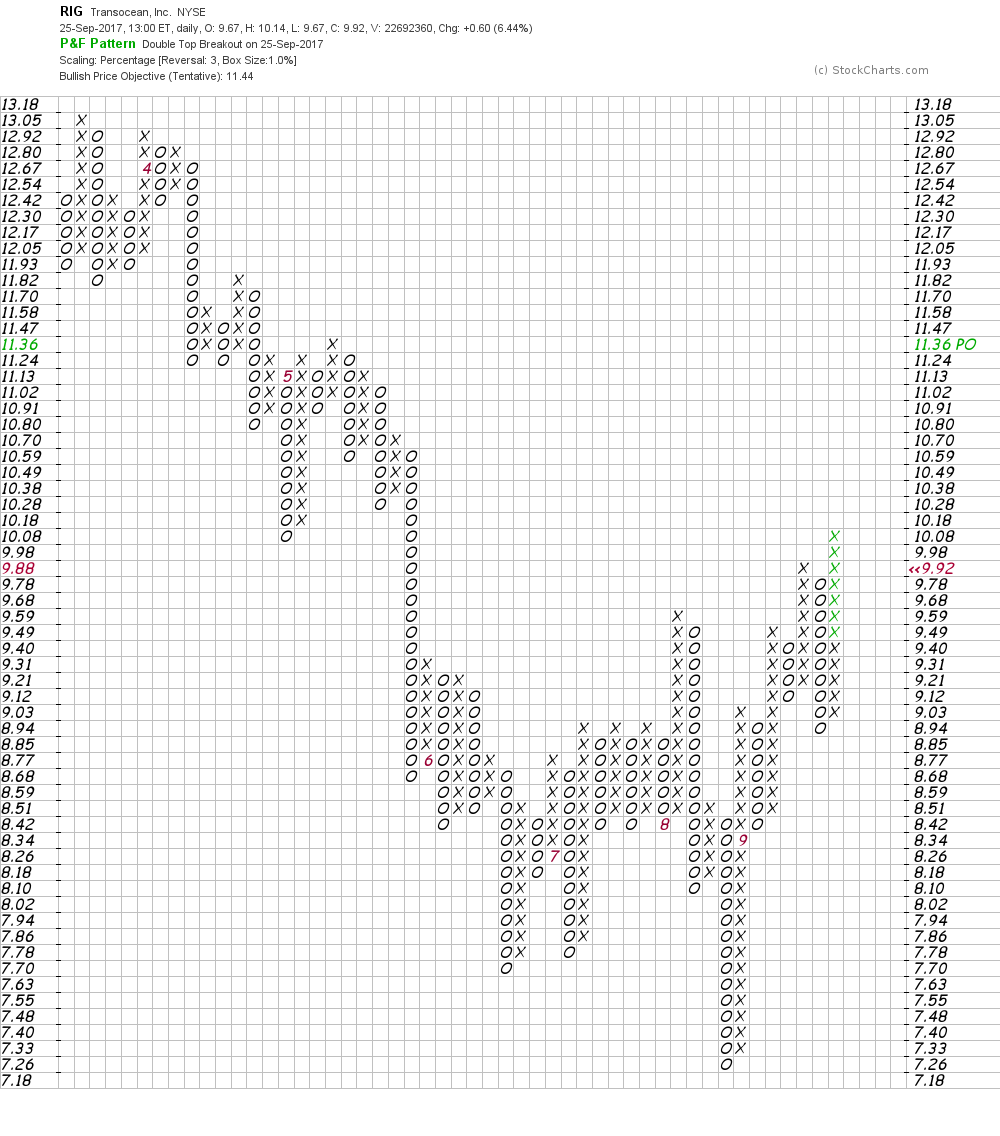 In this Point and Figure chart of RIG, above, we can see a small base pattern with a double-top breakout at $9.98. A potential price target of $11.44 is projected.

Bottom line: While the price action since June is better, RIG has not hammered out a large base pattern. RIG should trade sideways between $8 and $11, making a bigger bottom. Traders should approach RIG from the long side on declines and investors should be patient.

Energy Stocks Are Due for a Face-Saving Rally

After all, it is nearly impossible to find a positive analyst on natural gas or oil.