We have not looked closely at the charts and indicators of Diamond Offshore Drilling Inc. (DO) for more than year, and back in June of 2016 we wrote that, "DO has suffered a significant multiyear decline, and typically a big decline such as this one needs a long repair process. I would look for DO to work its way back down to the $20 area in the weeks ahead as the base pattern continues." DO not only declined to $20 not long after our update but it has continued lower and lower to reach $10, breaking the lows of 2002 and 2003.

Is there any hope for DO to make a recovery? Maybe. Let's see what the chart and indicators are saying now.

In this daily bar chart of DO, above, we can see that prices have found buying interest three times near $10: once in late June, once in early July and again in August. Prices have rallied to break above their August highs and the slope of the 50-day moving average line has turned up. Prices are still below the declining 200-day moving average line but it intersects around $14.50 -- not far above the market.

The On-Balance-Volume (OBV) is not showing much in the way of aggressive buying but it did make a low in June and so far the line is above that low. The trend-following Moving Average Convergence Divergence (MACD) oscillator is above the zero line but the two moving average lines that make up the indicator have narrowed and could soon signal a take profits sell.

In this weekly bar chart of DO, above, we can see how prices for DO have drilled lower and lower. Prices are still below the declining 40-week moving average line but it is not far above the market. Prices tested and held the $15 level several times since early 2016 creating a support level until the support gave way. This former support area is likely to reverse roles and become resistance in the weeks ahead.

The weekly OBV line has been moving up nicely the past three to four months telling us that buyers have turned aggressive -- something different from the pattern of the past three years. The weekly MACD oscillator in the bottom panel crossed to the upside in late July for a cover shorts buy signal. 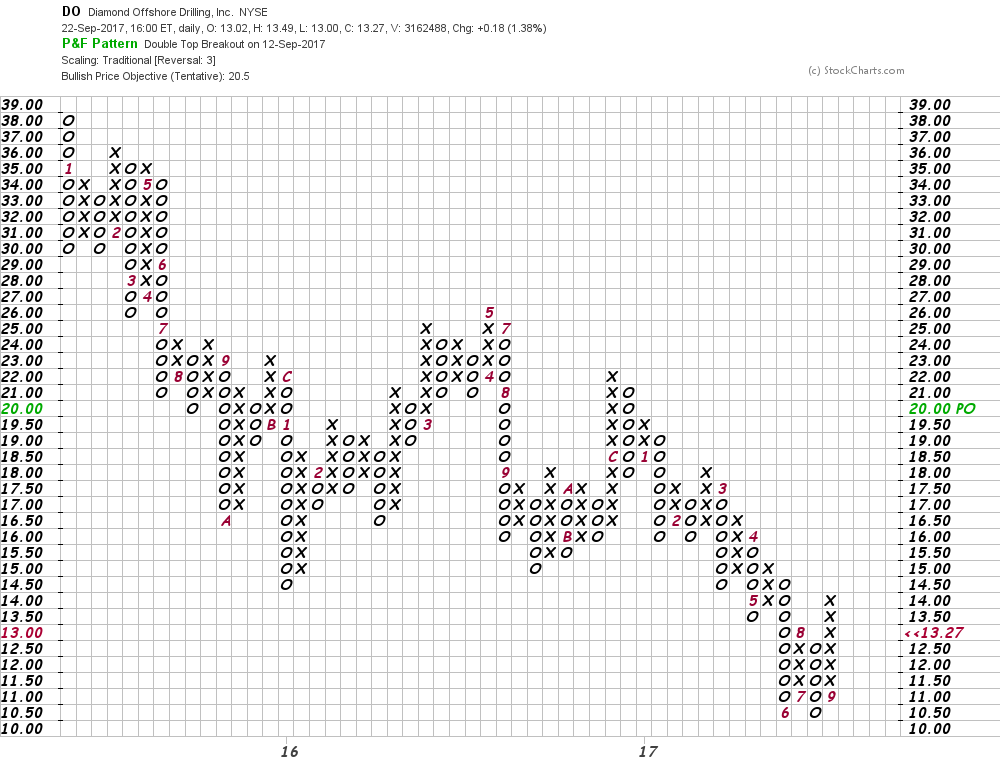 In this Point and Figure chart of DO, above, we can see the long decline and the recent minor breakout at $13.50. There is an ambitious upside target of $20.50.

Bottom line: DO could rally to break the declining 200-day moving average line but more base building is needed before the stock can break its longer-term downtrend. Aggressive traders could look to buy a pullback in DO near $12.00 or a close above $14.50.