Sirius XM Holdings (SIRI) is in the news this morning with the announcement of planned purchase of Pandora Media  (P) in an all-stock deal valued at about $3.5 billion. According to media reports, Pandora owners will receive 1.44 SIRI shares for each share of P they hold. I will leave all the number crunching to someone else with a CFA, while I just look at the charts and indicators with my CMT.

In the daily bar chart of SIRI, below, we can see the activity up to Friday's close. Prices have been in a sideways trading range the past three months. SIRI has been crossing above and below the 50-day simple moving average line. The slower-to-react 200-day line has been rising for some time now and intersects down around $6.50.

The trading volume the past three months has not shown much strength and the daily On-Balance-Volume (OBV) line has only inched up slightly, which tells us that buyers of SIRI have not been that aggressive ahead of Monday's news announcement. The trend-following Moving Average Convergence Divergence (MACD) oscillator crossed and turned down earlier this month in a take profits sell signal. The oscillator is just slightly above the zero line and a move below the line would be an outright sell signal.

In the longer-term weekly bar chart of SIRI, below, we have a mixed picture with respect to the indicators. Prices are above the rising 40-week moving average line but this indicator lags the market at turning points.

The weekly OBV line shows a rise from early 2016 to June of this year -- this is bullish. From June of this year the OBV line has been neutral. The weekly MACD oscillator crossed to the downside in July for a take profits sell signal. This indicator is still pointed down and has not narrowed toward an upside reversal.

In this Point and Figure chart of SIRI, below, we can see the price movement with some of noise filtered out. A decline to $6.77 would be potentially bearish while it will take a rally to $7.33 to generate an upside breakout. 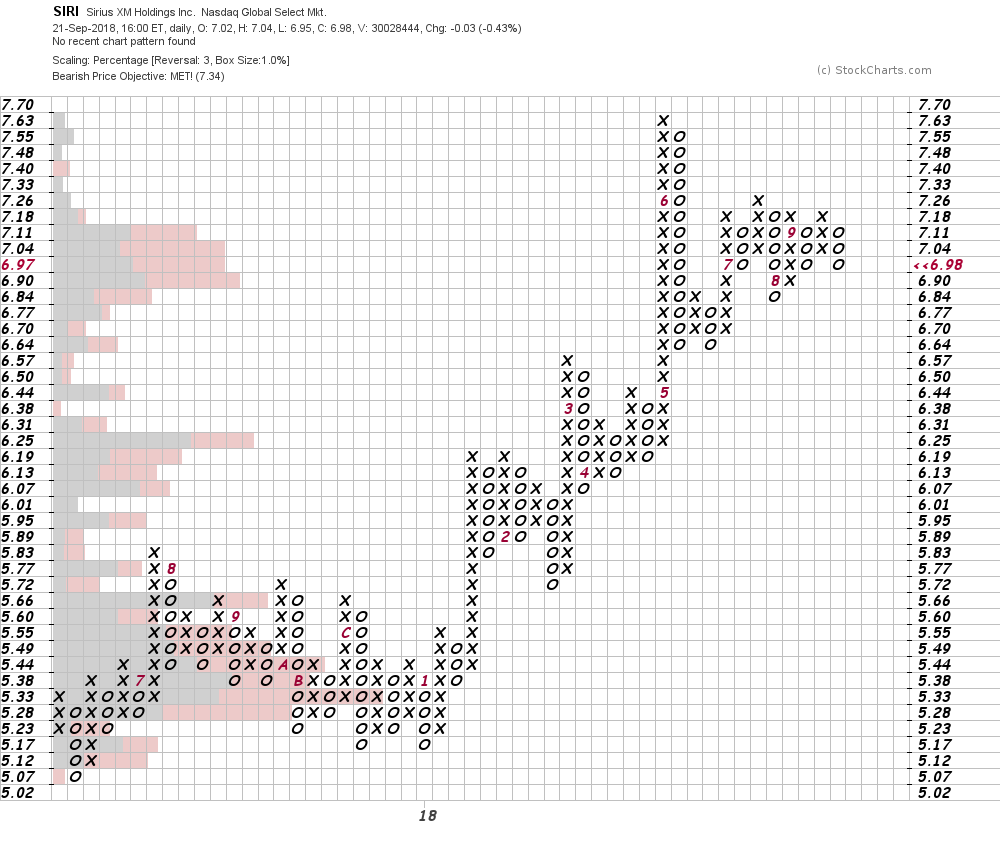 Bottom-line strategy: SIRI looks like it can weaken back down to around the $6.50 area where it should find buying support both from an earlier resistance area becoming new support and from the rising 200-day line. Investors may want to look at the stock around $6.50 but only "nibble" from the long side while risking below $6.25.

UPST has corrected down near the 200-day moving average.