Ever been to Walt Disney World in Florida? Maybe you've dragged the kids to Disneyland in Anaheim, California? Roller Coasters in the dark? I hope you like them. Oh, but you do not need to go on vacation to experience this. We can bring them right to your home. Do market participants understand just how bad things may get as conditions deteriorate between the U.S. and China?

Asian markets, including Shanghai, were closed Monday morning for the Autumn holiday. However, the Hang Seng in Hong Kong did open for business on Monday. That market took a 1.6% hit that left European markets and U.S. equity index futures playing from behind in the early going. Still, those futures did moderate off of their deepest levels.

Tariffs between the two nations as they are now will not sink the U.S. economy, nor our marketplace. That said, this is part of a dangerous mosaic that will, in my opinion, include rising material costs, increased costs for labor and the continued withdrawal of artificially provided liquidity that one might simply call in aggregate -- rising input costs. Do I think input costs that increase from several corners all at once present as a significant problem? Not just yet, as earnings growth is expected to also remain very strong, at least for the rest of the year.

Would it upset you, if you were told that you had six months to a year to live? It would upset me. The 10% tax on $200 billion worth of Chinese imports into the U.S. went into effect on Monday. Obviously, this does not scare a lot of U.S. firms reliant upon China for revenue or for production. Should that tax ramp up to 25%, though, that would knock half of a percent or so off of U.S. GDP.

U.S. equity markets will wrestle with much tougher comparisons in terms of earnings growth in the not too distant future. We may very well see that glorious 3200 level for the S&P 500 this year, or early next, as markets benefit from the annual November run into the January effect.

What then? What if corporations are still paying more for raw materials and for wages? What if providing benefits to those employees just keeps getting more expensive? It will. I have not even mentioned the coming reduction in deployable monies coming home from abroad. How do you think we'll do with smaller, less aggressive buybacks and dividends that remain stable at best?

How do you think the market will do as the central bank continues to withdraw liquidity from the economy? While I am on monetary policy, you do understand that interest expense is as much a rising input cost as any other, and that U.S. corporations have piled on the debt, right?

Remember the fiscal cliff? This cliff won't be the kind that shuts down the government, but there is a cliff out there somewhere. I have rappelled off quite a few cliffs in my day. Always dangerous. Easy way to bust a finger or tick off a bird, maybe even a snake. This cliff is where the federal government's debt-load becomes unsustainable as interest rates rise.

I do not mean to scare you. My intent is to make sure that every one of you is fully aware of your surroundings. I am not yet running for the hills, but I am thinking about how to hedge myself every day, even as my P/L suggests that all is well. I know better. I have been slapped around before, as I know so have many of you.

Physical assets, such as gold and land, will also be subject to market valuations, but they do increase an individual's diversification, reducing the power that any one asset class will have in relation to the whole. I believe there may even be a place for a substantial position in fiat currency, provided that it is the right fiat currency. They all stink in a crisis.

In the meantime, no sobbing. We remain a ways away from placing a substantial premium on canned food and clean water. But maybe you want to rely on yourself on the day that you need this stuff.

This week's Fed meeting, and the dog and pony show that follows, will likely be the most important one that we have seen in quite a while. The FOMC must remain flexible in their intent for the trajectory for monetary policy. An overt attempt to get the Fed Funds Rate to a certain net level versus inflation while also keeping the balance sheet on a strict diet is the most significant threat to both a marketplace, and an economy bloated on debt.

Remember, any guess at the level for Fed Funds Rate that is neither accommodative nor restrictive is only slightly more useful than a Bigfoot sighting in determining where interest rates should be. These levels should be more about human response to actual surplus and scarcity than to policy. That's my opinion.

Her name is Nike, the goddess of victory, according to ancient Greek mythology. It is likely that most young folks today don't know that. They may, however, know Nike (NKE) as the athletic shoe and apparel company that signed NFL free agent quarterback Colin Kaepernick to a promotional deal. Almost all sports fans, and folks who pay attention to the news, know Kaepernick as the ballplayer who initiated the "taking of a knee" during the playing of the national anthem. He did this as a way to protest what he and others see as racial inequality in general and more specifically what they see as police brutality.

I will never sit or kneel during that anthem, so do not confuse my message here. Nike -- the stock not the Greek goddess -- has run some 36% this year, and significantly so since the initial selloff that this news event created. Readers of Market Recon are well aware that this column suggested buying the stock that morning, coming off of Labor day weekend, and that the author did buy the shares, as well as sell some put options in order to further drive down net basis costs.

Nike understands how their clients think, and what they'll go for. That much, I think is clear. To profit from that relationship, a trader much become mercenary in thought. To be honest, when it comes to making a buck or two, that helps.

The truth is that Kaepernick has broken no laws, and has not even done anything unethical. Disrespectful? In the opinion of some, yes. Not so in the opinion of others. The fact is that less than 1% of NFL players are taking a knee this year, so if that is an issue for fans, is not more than 99% pretty darned good?

Yes, I think employers have the right to demand and expect certain behaviors to their liking while employees are wearing the employer's uniform. And on their employer's time. That is a policy issue within the bounds of that business. As a fan, I only watch the NFL peripherally -- and that is not a product of any boycott. I just have better things to do on a Sunday.

Oh, did I mention that another Nike spokesperson made the news this past weekend? Tiger Woods, remember him? Yeah, I don't watch or play that sport either, but a lot of folks do, and Tiger Woods is their top draw. Woods won his first tournament championship in five years, coming off of several injuries and back surgeries. Is this a positive for Nike? Well, it certainly can't hurt.

NKE will report the firm's first quarter after the closing bell Tuesday night. The most important market events of the week are likely the previously mentioned Fed meeting, followed by the Salesforce (CRM) Tech conference in San Francisco this week known as "Dreamforce," but the Nike earnings may be the most important earnings release. CRM is an Action Alerts Plus holding.

The industry consensus is for an expected EPS of $0.62 on revenue that prints between $9.88 billion and $9.93 billion. There are whispers out there running as high as $0.66. The revenue should be good enough for year-over-year growth of more than 9%. Not impressed? Think about where retail and apparel were in general not so long ago. Make no mistake, this is a success story.

My thoughts, back then, were that Nike has a chance to run going into earnings. On top of Nike's history of posting strong Septembers, sales have been strong, and/or growing in recent quarters across Europe, the Middle East, Africa, China and even North America. Margins have shown improvement. In addition, it remains my belief that Nike is ahead of the curve on doing the necessary preparation in reworking supply lines around China, if need be. Okay, so if you listened, you are up. 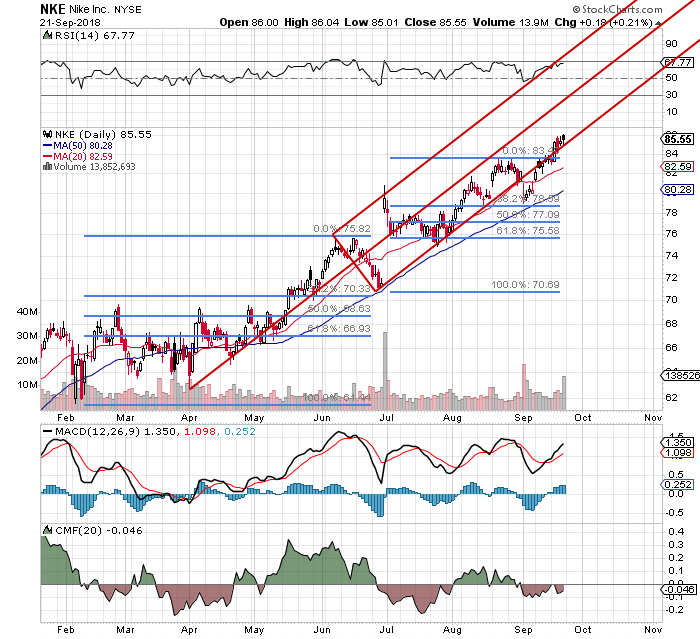 Easily spotted is the "Kaepernick Dip" and subsequent recovery. The lower trend line of the Pitchfork has been regained. The daily MACD and Relative Strength Index both remain very positive. But allow your eyes to gaze to the Money Flow indicator below the chart, and you'll see no recovery at all since the Kaepernick news. That's a little odd.

If you're like me, and you did buy the shares on that dip for a trade, then you'll be looking to protect profits now. Personally, I am up 9.3% in less than three weeks on this one. I will be taking some off ahead of the numbers. I am in a different position than someone coming in flat. For those also looking to protect "this house" at the expense of a limited debit, there is a way to go, without selling any equity. Let me explain.

--Assumes an equity long position of 100 shares -- and the need to protect recent gains, without necessarily selling the shares.

This will cost the trader a net outlay of $160. Should the shares rise in value into this Friday, these options contracts will expire worthless. The trader has maintained ownership over all of his or her shares.

Should the shares decline in value into this Friday, the trader would be able to sell the shares at $85.50, and were the decline to reach the $81 level, that is where the trader would be required to buy back the shares, realizing a net capital extraction of $290, after the already mentioned outlay. This strategy is known as a "Bear Put Spread."

Get an email alert each time I write an article for Real Money. Click the "+Follow" next to my byline to this article.
TAGS: Investing | Global Equity | Regulation | Markets | Consumer Discretionary | Economic Data | Earnings | Consumer | Economy | Newsletter | Politics | Stocks

DoorDash Announces Layoffs But Is That Enough to Lift the Stock?

Here's what the charts are telling us.

This quartet of stocks includes a boat retailer, an underwear maker, a department store chain and an entertainment giant.

Let's compare the home improvement giants head to head, and see if one stock has an advantage over the other.

The tech giant could see its technical signals weaken as its shares take a hit from the impact of Covid protests in China on iPhone output.