There's no doubt about it: we all love our homes. However, history shows that we really love them after large uptrends in home prices, when our human emotionality causes us to use leverage to buy homes that we don't need, build homes others don't need, and eventually suffer the same consequences the crowd suffers each time a large uptrend matures: falling prices. This not only affects the price of the home we live in, but also the price of the home builders that are publically traded build.

Let's look at one of the leaders in the industry, Toll Brothers (TOL) . As this monthly bar chart of TOL shows, this builder of premium homes enjoyed a tremendous rise off the double bottom of '08 and '11. 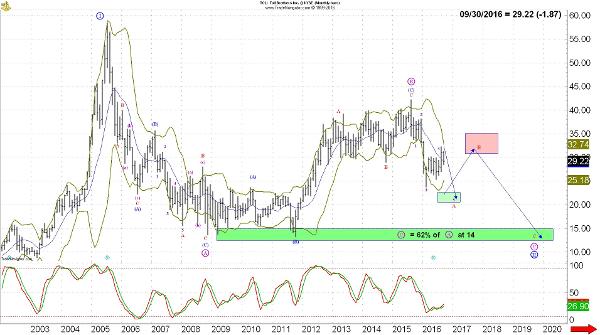 From the low of the last financial debacle, the stock has been rising from the $12 area to the high in 2015 near $42. Clearly, that 3.5-fold increase was fueled by massive built-up demand, after years of no demand from '05 through '10. So the question is, why don't the industry leaders sense the demand ebbing and flowing and adjust their business models to ramp up before demand hits, and ramp down before it wanes? Obviously, if they could, they would. But they just don't have the tools. Even the best companies respond to the crowd, rather than anticipate it.

As investors, however, we can choose to be far more flexible and treat companies as only vehicles to grow wealth, rather than as slaves to the earnings reporting schedule. Doing so allows those with a system of objective analysis the freedom to sell whenever the system warns of above-average risk present with only average return expected (or worse), and buy when risk moves to below average and expected return moves to above average. Simple, right?

Let's go through part of the process we use, which is known to readers of these pages as the DSE (decision support engine). First, let's notice the monthly stochastics. They are barely bouncing off the lows of this year, which was the most oversold condition since 2007. If a major bottom was in, we'd expect to see an explosive, five-wave impulsive structure, which is not visible. Rather, the empirical data shows an up/down/up bump, but nothing resembling anything impulsive.

This is also true of the price pattern, which has a very visible up/down/up structure off the February low. We have labeled that rise as wave 4 up, which should be followed by wave 5 down, which would complete red A; the first five wave decline in what should eventually end the entire correction off the 2005 high.

This negative harbinger has occurred after the best year in real estate since 2005. Therefore, objectively, we must ask what the real estate industry (at least home building) will look like when it's no longer the best year since 2005. That picture is what this chart's behavior since 2015, and the forecast of blue arrows, has already been discounting for a year: significantly less demand for the products of companies like Toll Brothers.

How significant? Let's look at some historically meaningful measurements, using Fibonacci ratios. The decline off the 2005 peak to the 2008 low crashed 45 points (77%). We've labeled that decline as wave A-circled. The rise since, an overlapping/corrective structure, is labeled wave B-circled. The next move of consequence is expected to be wave C-circled, which has a minimum price measurement 0.62 x 45 (length of A-circled), or 28 points. Subtracting 28 from the B-circled high of $42 yields a target of $14. This target is highlighted in the bright green box. That informs the objective observer that the bounce that develops from the initial, light green box surrounding $22 should be sold up near $31 +/-2, as the initial low should not be the final low of the decline off the $42 level.

Not shown, the weekly bar degree of trend has stochastics that just crossed down, and have three to 13 more weeks of decline to come before they become oversold. This hints that any lift into the low $30s should not be chased.

In summary, the bell is now tolling for Toll Brothers. Much lower prices are expected to be seen in the coming months to years, which anticipates another shake-out in the home building sector and warns those waiting to sell single family residences sooner, rather than later, before the crowd realizes that the sellers have passed the baton of control to the buyers. Once that happens, the '05 to '08 practice of lowering and lowering your offers will have return, to the detriment of the sellers.

Get an email alert each time I write an article for Real Money. Click the "+Follow" next to my byline to this article.
TAGS: Investing | U.S. Equity | Basic Materials | Real Estate | Markets | Stocks