Few business statistics are more important than net profit margins. That term is defined as what percentage of each dollar of sales finds its way to a company's after-tax bottom line. With some companies that number is fairly consistent. With others it can vary quite dramatically.

Understanding what to expect in this regard can lead to spectacular failures or triumphs for stock traders. It explains much of what already happened to a stock's price and can be quite predictive about what's likely to occur next.

Buying shares when margins are unusually and perhaps unsustainably high is extremely risky. Taking positions when profit margins are extremely depressed but likely to rebound can make fortunes for investors.

You can find historical net profit margin data for most stocks in Value Line, S&P, Morningstar and other readily available sources.

Here are two examples of companies at both extremes of the variability scale.

CVS Health Corp. (CVS) is a bastion of predictability. Its profit margins have held in a narrow range dating all the way back to 2009. 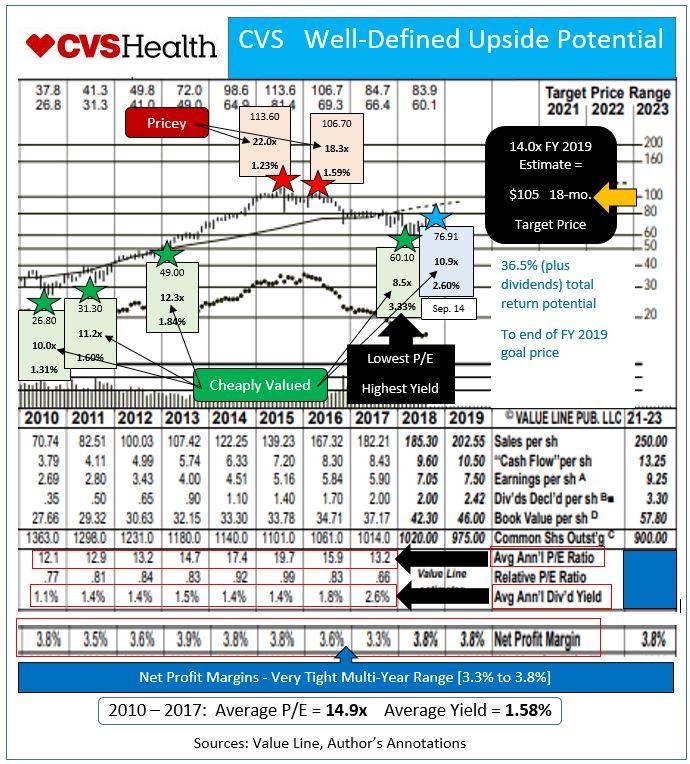 A quick glance at the chart above shows all my normal assumptions for the stock's past share price movement were clearly in effect. When CVS was cheap (green-starred periods) it never failed to rebound. The stock's two obvious "should have sold" moments (red-starred) both came when CVS commanded price-to-earnings (P/E) multiples that were well above average.

Companies with less predictable profit margins can drive analysts and traders to drink. Their shares tend to be quite volatile as quarterly earnings surprises, both positive and negative, can be very common.

Francesca's got clobbered on Sept. 11 after missing on its second-quarter estimate and lowering full-year EPS guidance to a midpoint of $0.20 from $0.56. That reduction implies FRAN's net profit margin will drop to only about 1.4% this year, the lowest ever for this debt-free company.

Management has taken numerous steps to reverse this trend. A new buyer leading to a more appealing merchandise mix is in progress. Old inventory has been marked down and cleared out. Prospects for a big turnaround are in place. Expect dramatically improved results and a return to more normal profit margins later this year and continuing into fiscal 2019 and beyond.

Consensus views for next year now center on EPS rebounding to $0.65. Value Line thinks Francesca's will be earning around $1.25 per share by 2023 even if net margins are only back to a still-subpar 5.8%. 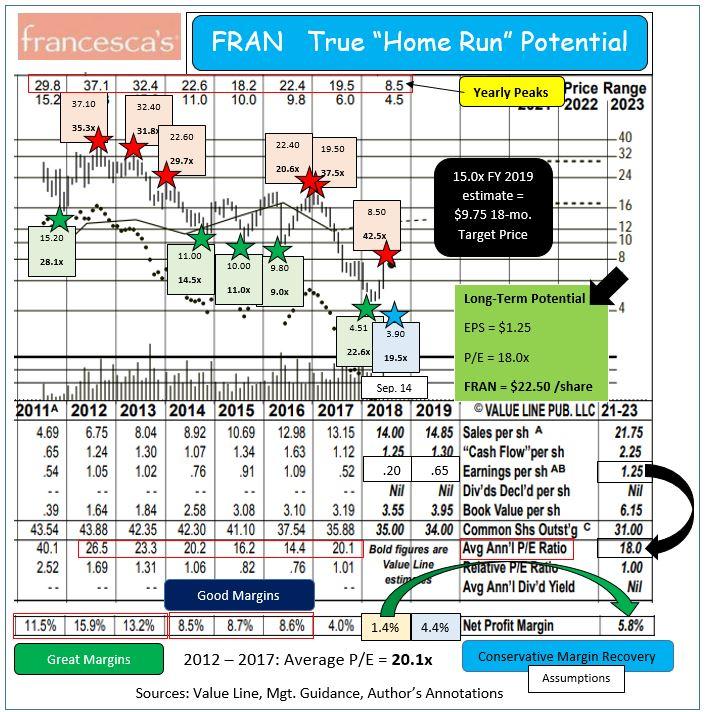 Francesca's future is much less predictable than the future of CVS Health. If things go well, though, the stock's upside is humongous. Modest operating improvement coupled with a more typical P/E could send Francesca's near $10 before too long. Project out three to five years and $20 to $25 appears reachable.

It's always tempting to believe the pessimists when a stock has just been taken to the cleaners. Contrarians willing to take the other side of that argument might see outsize gains.

With zero debt, no defined pension plan and no preferred shares Francesca's is not going to get into any financial trouble. The retailer is profitable and 2018 almost certainly represents the low point in this cycle.

Unlike owning a call option, there is no time limit on reaching the stated goals.

Conservative investors might want to buy into CVS right now. Speculative types might wish to pick up some FRAN while it's still depressed. I'm betting that both will be fine trades for those with time horizons of at least 12 to 18 months.

(This commentary originally appeared on Real Money Pro on Sept. 17. Click here to learn about this dynamic market information service for active traders and to receive daily columns like this from Paul Price, Bret Jensen and others.)