Puma Biotechnology (PBYI) is based out of Los Angeles, but there doesn't seem to anything laid-back about its price chart. Shares are finally roaring back from big losses in 2014 and 2015.

In this daily chart of PBYI, above, we can see a nine-month saucer bottom that started in early January. Prices are now moving out of this base with a rising/bullish On-Balance-Volume (OBV) line. Earlier this month we can see a bullish golden cross of the 50-day moving average line moving above the slower-to-react 200-day average. The trend-following Moving Average Convergence Divergence (MACD) oscillator has been positive the past two months and looks like a fresh buy signal is occurring.

In this longer-term weekly chart of PBYI, above, we can see both the big decline and the new base. Prices have firmed above the 40-week moving average line. The OBV line on this timeframe has been strong the past three months and supports and confirms the rally with more aggressive buying. The weekly MACD oscillator has just crossed back above the zero line for an outright go long signal. 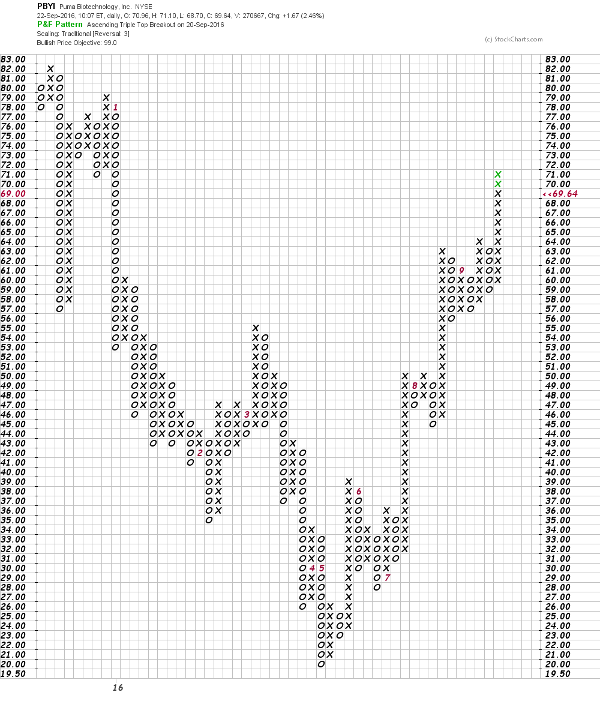 The bottom in PBYI does not look as rounded looking at this Point and Figure chart, but it is still a bottom and bullish. The recent breakout above $64 yields a price projection or target of $99 but let's call it $100. Jessie Livermore, the famous trader, observed that stocks that reach $99 very often push up to $100. As a youngster he reportedly used that observation to make money in the Boston bucket shops.

A Trio of Back-to-Normality Trades Worth Noting

With lockdowns ending and life as we knew it resuming to some extent, these three stocks should benefit.

Cannabis Cos. Ready for Sales to Heat Back Up in Massachusetts

State's dispensaries get OK to reopen recreational curbside service on May 25.