Red Hat (RHT) has rallied in recent sessions, but the three previous months of liquidation (selling) suggest that a strong upside move is not likely to be sustained unless more aggressive buying returns -- which may happen today.

In this daily chart of RHT, above, we can see that RHT has spent the last 12 months in a broad sideways trading range. Like many stocks, this year the low for 2016 came in February. RHT rallied quickly and strongly to a late June peak. From that high around $82, we have seen a correction back to $70 followed by a period of narrow sideways activity.

Looking closer at the volume, we can see a big uptick in turnover into that June zenith. The On-Balance-Volume (OBV) line proceeds to move steadily lower from its June high, suggesting that investors were more aggressive sellers of RHT over the past three months.

Can RHT move higher? Sure, but the last rally above $80 ended quickly, and there still is overhead resistance in the $78 to $84 area from the fourth quarter of 2015.

This three-year weekly chart of RHT, above, has a more positive cast to it than the daily chart. RHT just rallied above the still-declining, 40-week moving average line.

Note that the OBV line on this weekly timeframe has been in a strong and steady uptrend the past three years. Even though RHT has traded sideways for the past year, the weekly OBV line has continued to rise -- and suggests that longer-term investors are bullish on RHT and continue to accumulate shares. The flat MACD oscillator mirrors the neutral trend in recent months. 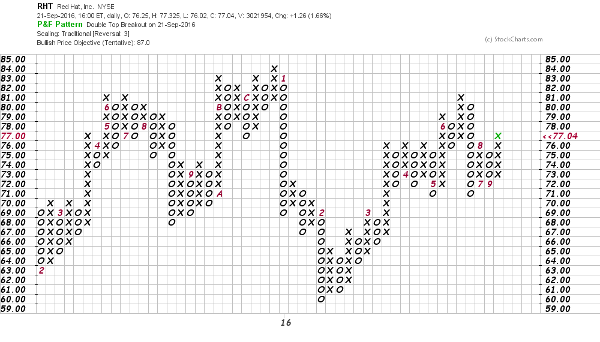 In this Point and Figure chart of RHT, above, we ignore volume and time and focus just on price changes. Small jiggles of less than $1 are also ignored as noise. The recent trade, or entry, at $77 puts a more positive spin on this chart -- and the price target of $87 is not unrealistic considering the strong gap and opening today.

GE Is a Tale of Two Trends

Here's what the charts and indicators are pointing to.

Veeva Systems Has Dropped out of the Clouds: Look Out Below

Traders are voting with their feet.

The quartet consists of a tech giant, an entertainment behemoth, a semiconductor producer and a toolmaker.