FedEx Corp. (FDX) was last reviewed in late June, where we concluded, "Yes, prices broke out on the upside this month as the bull reasserted itself, but we have some mixed signals that suggest we can pullback in the short-run before we see renewed price strength. I feel more confident trying to buy FDX around $200 risking below $190."

With a few months of hindsight we can see that our road map for FDX was pretty good. Prices corrected lower in July and early August followed by renewed strength. FDX is just a few dollars away from new highs so a fresh look at the charts and indicators seems appropriate.

In this updated daily bar chart of FDX, above, we can see that prices are above the slightly declining 50-day moving average line. The slower-to-react 200-day line is rising smoothly and intersects just below $200. The On-Balance-Volume (OBV) line looks like it is foreshadowing a price breakout for FDX. The OBV line dipped slightly in July as prices retreated but it has since moved up to a new high ahead of prices.

In this weekly bar chart of FDX, above, we can see that prices have been in an uptrend since early 2016 and remain above the rising 40-week moving average line. The weekly OBV line has been bullish and rising since early 2016, confirming the advance with its signals of aggressive buying. The weekly MACD oscillator has been above the zero line since the first quarter of 2016 and looks poised for a bullish crossover. 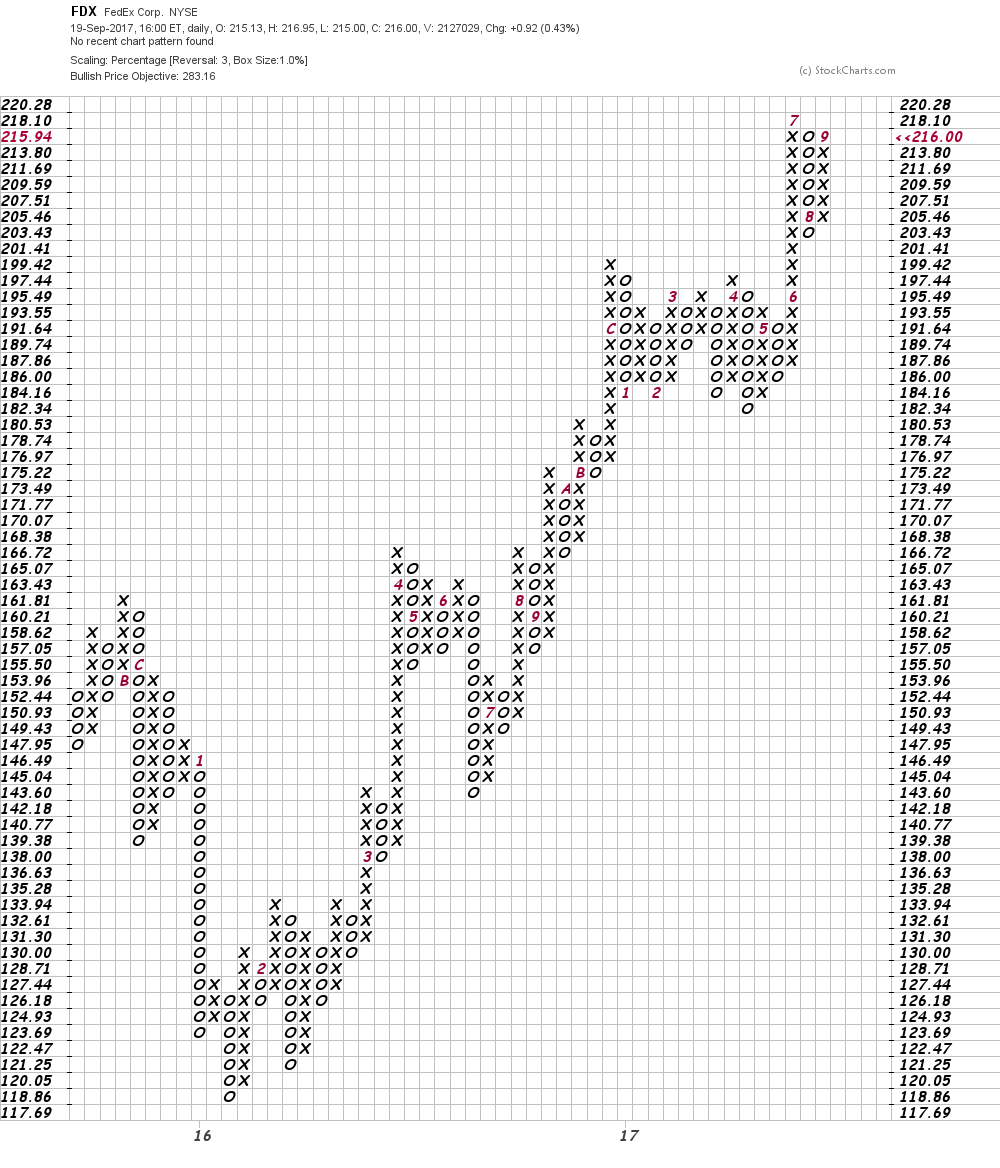 In this Point and Figure chart of FDX, above, we can see the large consolidation pattern in the $180s to $200 area. There is a very ambitious long-term price target of $293 but the chart needs a trade at $220.28 for a short-term breakout. The round number of $250 is probably going to an interim price target.

Bottom line: FDX looks ready to move higher. Traders could go long or add to existing longs at current levels risking below $205. Add on strength above $220. Our first upside price target is $235, followed by $250.

Get an email alert each time I write an article for Real Money. Click the "+Follow" next to my byline to this article.
TAGS: Investing | U.S. Equity | How-to