Experts are wondering whether cannabis company Tilray (TLRY) is playable at all by rational investors or traders given the stock's insane fundamental valuation and utter defiance of its charts.

Tilray was up some 47% to about $228 at last check Wednesday, as well as around 100% in less than two days and more than 1,000% since its July 19 initial public offering. That means TLRY has cruised past Canopy Growth Corp. (CGC) to become the world's most-valuable cannabis company.

Or as Citron Research put it in a tweet:

The move in Tilray is beyond comprehension. No one needs a market pundit to explain that. This is just the dynamic of trading low float stocks. Yes we are short and will hold a manageable position until rationality sets in

The first question many investors are asking is how high this stock can really go. So far, there doesn't seem to be a firm answer.

Tilray CEO Brendan Kennedy has seed he foresees up to a $100 billion valuation for his company. That would push TLRY shares above $1,000 at the float's current size.

Although few Tilray watchers are that enthusiastic, rebuttals have been hard to come by as the company cruised past a $20 billion valuation Wednesday morning. Even some of the most bullish analysts have simply struggled to keep up with the stock's minute-by-minute moves.

Vivien Azer, senior research analyst for beverages, tobacco and cannabis at Cowen & Co., has nearly doubled her Tilray price target in less than two weeks and still can't keep up. She gave the stock a $34 price target in an Aug. 13 research note, but boosted that to $62 on Aug. 29. Then Tuesday, she reiterated a "Buy" rating on Tilray but released a note without a price target at all, because who knows where the stock is going?

Citron Research zeroed in on such moves in a tweet earlier this month, writing:

Citron LOVED $TLRY at $26 but now we are SHORTING stock. Cowen lowered est and still raised tgt $62 only shows "RETAIL INVESTORS GONE MAD" and forgot $TLRY went public at $17 - 6 weeks ago. We would expect an equity raise at these levels. By far most expensive in space.

Tim Seymour, CIO of Seymour Asset Management, wrote in a note Wednesday morning that "I still think this is options-related. I know guys who were short into the monthly expiration on Friday. Newsflow has been massive, but this is not fundamental."

Seymour was referring to weekly $90 and $100 strike puts, which Schaeffer's Investment Research noted were traded in high volume last week. But those strike prices are far in the rearview mirror at this point, as Tilray has climbed well past $200 per share.

Technicals and Fundamentals Mean Nothing

The fundamental and technical indicators on Tilray seem not to matter as the stock pushes gains and dislocates further from charts.

Fundamentally speaking, Tilray recorded $9.7 million in sales last quarter, doubling from the prior year. But even if the company doubles that again in the current quarter to $20 million, its current valuation at around $21 billion is more than 1,000x sales. 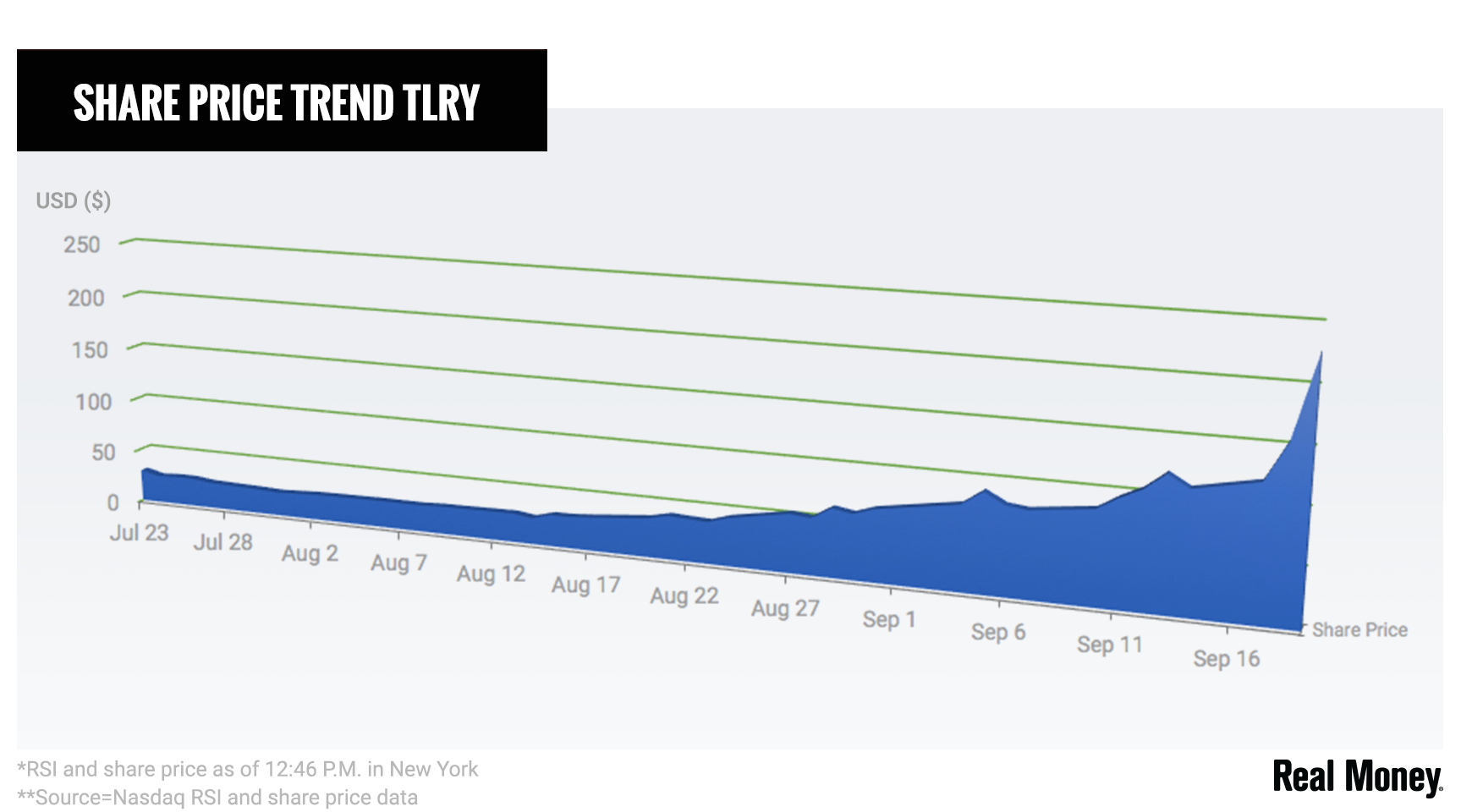 As for technicals, Tilray's Relative Strength Index came in at 90.3 as of 1 p.m. ET, well above the overbought band of 70. In fact, TLRY has been in overbought territory since mid-August. 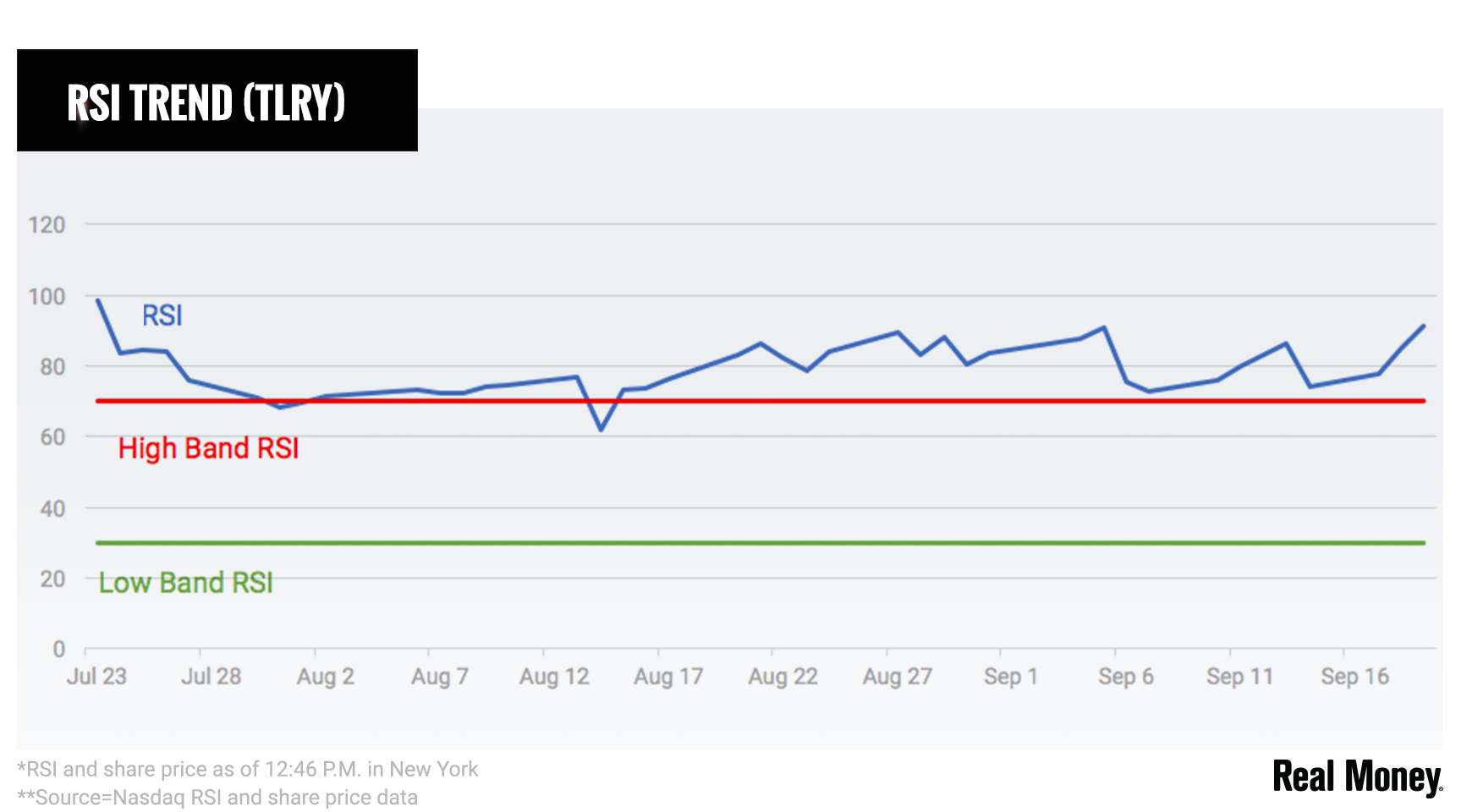 As short sellers get squeezed and even bulls aren't sure how to price the stock given its incredible momentum, trading Tilray has become a case "hot potato." Given that we're at the halfway point to the company's lockup expiration on insider shares, it might be best to wait for some technical or fundamental signs that give a sense of where the stock is heading.