No doubt about it. While equity markets seem to be handling news around U.S./Chinese trade conditions quite well, the story around U.S. paper has certainly changed. This morning, U.S. two-year notes are paying a rough 2.82%, which would be the highest yield offered by that product in over 10 years.

As for the U.S. 10-year note, that product kissed the 3% line last Friday, and actually saw that level pierced, but not held, back in August. This morning, the 10-year is giving up more than 3.06% -- and appears ready to test the 3.12% support level seen for this product last May.

If you're a banker, it's about two things. Net interest margin and competition. Can't do much about the latter, the field is just more crowded than it used to be. As for net interest margin, the spread between the yields of the two year and the 10 year (or the five year and the 30 year), also known as the yield curve, has actually done something rare of late, and that is steepen just a bit. As I bang out this note in front of my blackened office window, passing through the zero-dark thirty hours, that 2s/10s spread stands between 24 and 25 basis points, or about six basis points wider than it was just three weeks ago.

Have expectations for consumer level inflation grown? To some degree, as a result of a ratcheted higher trade conflict with China... yes, quite possibly. Let's not forget that the CPI rolled over a bit in August. Now, 10% is a far cry from 25%, and China's retaliation, at least at first, seems paltry in comparison.

That said, U.S. economic data is, on the whole, robust, as the third quarter winds down. Obviously, the regularity of increased targeting of the short end of the rate curve, and the steady withdrawal of liquidity from prior levels, have caused some inconsistency across certain data points that might be more directly reliant upon human response to artificially orchestrated conditions of both surplus and scarcity. We'll get a taste of this at 08:30 a.m. ET, when the Census Bureau puts their numbers for August Housing Starts to the tape.

I think something else is aiding in the shape of the curve holding its slope over night. Last night, as the final bell rang out loud at 4 p.m. ET, the U.S. Department of the Treasury released their "TIC" (Treasury International Capital) data for July on cross-border investment. Yes, July is a bit dated, but this is what we live with as armchair economists.

The headline number for net long-term flows was positive -- at $74.8 billion. Even broken down, overall net bond investment was a positive number. Yet, the number within the numbers was slightly negative. What do I mean by that? Chinese holdings of U.S. Treasuries declined by $7.7 billion to $1.171 trillion in July. Were Chinese accounts net sellers yesterday? Guess we'll know in two months, but it stands to reason.

We discussed in yesterday's note the possibility that, being ill-equipped to match the about to be implemented U.S. tariffs tit for tat, China might restrict U.S. access to either raw materials or normalized corporate supply lines. Another aggressive move would be to significantly devalue the yuan versus the U.S. dollar. This would also have obviously negative implications for China as well as the U.S., so it might be more of a last-resort type threat than something we'll see to our immediate front.

Chinese Premier Li Keqiang spoke overnight at the World Economic Forum event, and said as much, denying that China would resort to competitive devaluation. That may have calmed jitters across Asian markets, but what if the use of the word competitive is just camouflage meant to disguise intent? What if China does devalue the yuan, knowing that a cheaper U.S. dollar is also a desirable part of President Trump's agenda? For one thing, dollar strength obviously would hurt U.S. trade deficits. For another, what it would do would be to export deflation (or slow inflation, at best) back to the U.S. economy.

This, my friends could arrest any upward momentum experienced at the long end of the yield curve, while Chinese accounts further whittle down balance size. Understand? This could help alleviate any capital flight risk experienced on the Chinese end in the event of such an occurrence. That particular risk would come down to how much China is willing to hurt itself in order to hurt the Trump administration's agenda on the issue. Could the Chinese actually threaten to invert the U.S. yield curve by devaluing the yuan in an effort to slow U.S. inflation expectations? Probably not while also making sales at the same long end. Then again, I am just a man with an opinion.

It just keeps getting worse for Micron Technology (MU) . This is a name that I have had great faith in, a name that I have also steered you wrong in regards to. Just know that if you are long this name, I have been in this fight next to you every step of the way, as this position turned from one of joyous victory into a serious exercise in risk management.

Just in the last week and a half, we have seen Micron hit with either outright downgrades, or at least reduced price targets from the likes of RBC Capital Markets, Goldman Sachs, Deutsche Bank, Macquarie and BMO Capital Markets. The problem -- or problems -- seem to be deterioration in both DRAM and NAND pricing power. When it comes to memory, weakness in NAND had been expected for some time now across the industry, but DRAM? That's a horse of a different color, and had to be priced in.

Does Micron have any allies? Why yes. Of course they do. Less than two weeks ago, Bank of America Merrill Lynch reiterated that firm's "Buy" rating and left their target price at an even $100. That would be nice. In fact, that would be an appreciation of 120% from last night's close. Late last week, David Tepper also appeared in the financial media and he backed the stock. In his words, Tepper remains "very, very long" MU. Analysts have made much of sizable inventories. Tepper spoke of sizable demand involving servers, cloud technology and autonomous vehicles.

MU is expected to report its fourth quarter after the close of business Thursday evening. At the last sale, the stock is valued at just 4x forward-looking earnings. That means very simply that either the name is badly undervalued, or expectations are overly optimistic. More than likely, in my opinion, we may see a little of both.

Consensus expectations call for EPS of $3.34. Whispers are now running toward a miss of roughly $0.04 after having seemingly leveled at a miss of $0.02 until this week. Revenue is projected at between $8.22 billion and $8.25 billion, so we're talking about sales growth that's still more than 33% year over year.

As it was in June, this week will end up being about guidance. In June, the firm raised expectations for this quarter and the stock ran on that. By the way, if expectations come to fruition, the firm will not have misled on that increased earnings and revenue guidance.

As most of you know, I pride myself on my ability to manage risk. Much more so than my ability as a stock picker, I feel that my ability to regularly reduce my net basis is what has kept me relevant for many decades in an undeniably tough game. Weighing risk vs. reward is part of this management, as is discipline at both target prices and panic/replenishment points.

For instance, I sold half of my MU long position at $57.40 in June. That was my panic point at the time. I still liked the name, honestly, but discipline is discipline. I started buying those shares back at $47.70 in August, and have bought them in several tranches down to $41.61 last week on the Fibonacci bounce. I am short multiple calls and puts that will expire in two days.

My net basis in a name clearly stuck in a downtrend is $43.37 -- nearly two bucks below the last sale. You can do this. Every one of you is capable of defending yourself when a core position comes under fire. You have to focus, and maybe also be a little eccentric, but if you're still reading at this point, you obviously have the IQ. 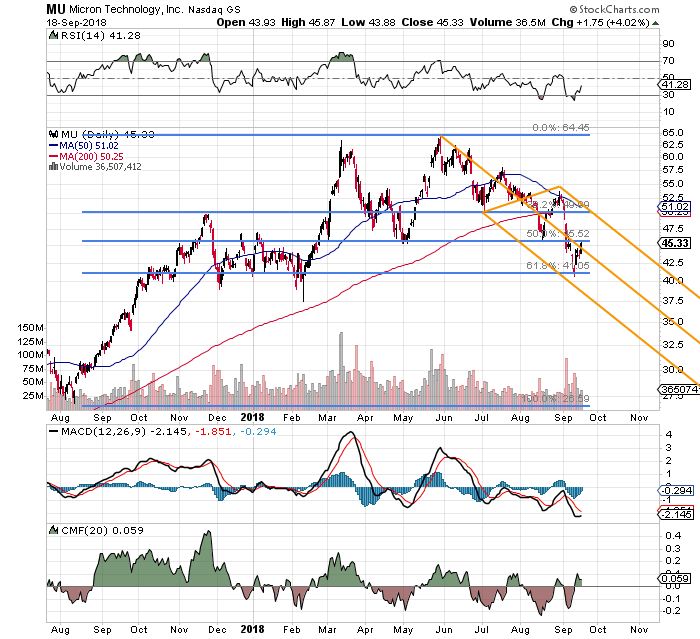 Plain to see for all, the daily MACD is weighted by all three components. Relative Strength displays something more like relative weakness. Money Flow does, however, finally seem to be climbing out of the "cave of doom."

Can we count on anything here? Common sense teaches us not to. It would not surprise this trader in the event of negative guidance to see a re-test of that $41 Fib level. I have sold enough calls to completely cover my long. I am also short puts that increase my exposure at $41.

What I am thinking of doing is adding exposure to the downside that would allow me time to recover if I need it, while further reducing my net basis. Keep in mind that Micron is a semiconductor name, subject to the whims of reckless passive investment, and is also more highly exposed than most to China-derived revenue flows.

To aid in net basis management:

Note: These ideas would, in the event of a rally for the equity, reduce the trader's net basis by a total of $2.60, while in the event of a selloff, it would allow time for the trader to correct him or herself. The possibility exists that the trader will, by January, have tripled the long equity position (adding 200 shares at an average of $38 to the equity position), and then would have reduced that new net basis by another $0.86.

Get an email alert each time I write an article for Real Money. Click the "+Follow" next to my byline to this article.
TAGS: Investing | Global Equity | Regulation | Markets | Financial Services | Technology | Economic Data | Earnings | Economy | Newsletter | Politics | Stocks

Earnings haven't provided a spark for the EV charging company, so let's see what the charts are saying.