Hasbro Inc. (HAS) looked bullish on our charts at the end of April, and we concluded that, "HAS shareholders and my six grandchildren are happy. Prices are pointed up. Sell stops could be raised to $94 and $140 is our new price target, which could be reached by mid-2017. Aggressive traders could buy a dip to $100 or a close above $104."

Prices rallied but never reached $140. Prices quickly reversed lower when they reached $115. Prices tumbled fairly quickly to the mid-$90s where we sit today. So, how do the charts and indicators look now? Let's check.

In this updated daily bar chart of HAS, above, we can see that prices are below the declining 50-day moving average line. Prices are also below the cresting 200-day moving average line. HAS has dipped slightly into a gap from early February. The daily On-Balance-Volume (OBV) line has been declining since early August and suggests that sellers of HAS had been more aggressive the past six weeks.

In the lower panel is the 12-day momentum study, which shows a short-term bullish divergence with higher lows from the momentum study in August versus lower lows in price. This divergence may or may not be big enough to foreshadow or signal a resumption of the advance of earlier in the year.

In this weekly chart of HAS, above, we can see that prices have been in an uptrend going back over the past three years. HAS recently broke below the rising 40-week moving average line. The weekly OBV line was rising until mid-July but has weakened since.

The weekly Moving Average Convergence Divergence (MACD) oscillator turned down in July to a take profits sell signal. This trend-following indicator could decline below the zero line for an outright sell signal or it may not -- it all depends on the price action in the weeks ahead. 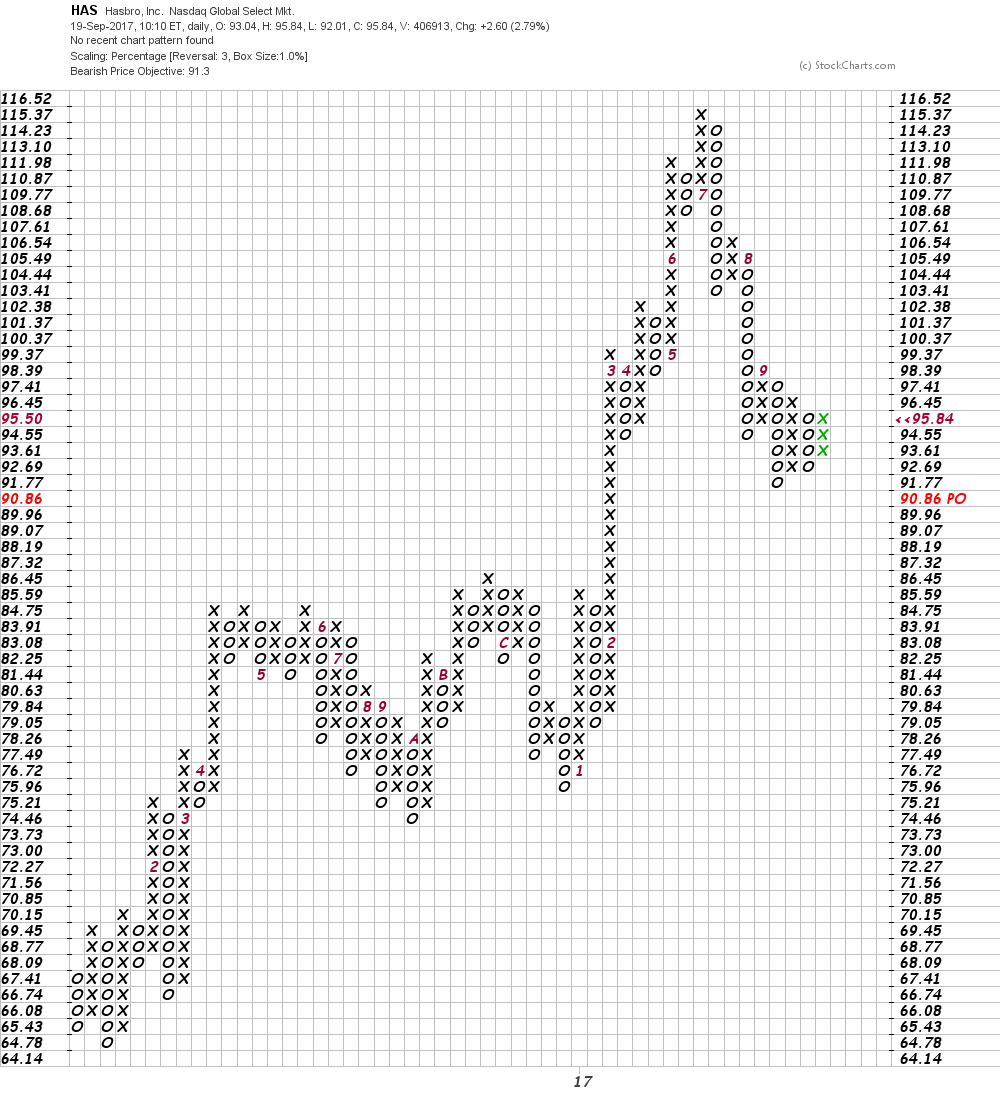 In this Point and Figure chart of HAS, above, we can see a small or minor downside price target for HAS around $91. This target, if it was reached, would be a new low for the move down and might precipitate further declines.

Bottom line: HAS is balanced between a downtrend on the daily chart and diverging technical indicators. Prices (or rather investors) will make up their minds soon enough. A rally to $100 will turn the HAS charts bullish while a decline to $91 would weaken the picture.

Get an email alert each time I write an article for Real Money. Click the "+Follow" next to my byline to this article.
TAGS: Investing | U.S. Equity | Consumer Discretionary | Consumer | How-to | Gaming | Stocks