We last reviewed the charts and indicators of Tyson Foods Inc. (TSN)  at the beginning of August, writing that "TSN has been weak for months and prices are still pointed down. A short-covering bounce could develop at any time but the bigger risk is for further losses." Looking at the charts and indicators of TSN Monday morning we can see that prices did bounce shortly after publication but now we may have to prepare for another price decline as the bounce lacked confirmation from volume.

Let's check out the charts again to see that we stay on the right side of the dominant trend.

In the daily bar chart of TSN, below, we can see that prices have recovered a bit the past five weeks or so. TSN is above the 50-day moving average line but the slope of the line is still bearish. The slower-to-react 200-day moving average line is still bearish and significantly above the market. The level of trading volume was heavy into late July as prices tumbled but is has slowed from the early August low. If the price of TSN was more attractive at the lower price level of around $58 it did not translate into more aggressive buying and volume.

The daily On-Balance-Volume (OBV) shows just a small rise in early August followed by sideways or neutral movement -- not what a bull would like to see. The Moving Average Convergence Divergence (MACD) oscillator gave a cover shorts buy signal in early August and recently moved up to the zero line for a buy signal. This buy signal has been short-lived as this indicator is poised to cross to the downside again.

In the weekly chart of TSN, below, we can see a mixed picture with respect to the price action and indicators. Prices are still in a downtrend and below the declining 40-week moving average line. The pace of volume has slowed the past five or six weeks, suggesting to us that the price improvement has been a bounce in a downtrend and probably not the start of a sustained rally.

The weekly OBV line shows just a slight up-move from late July. The weekly MACD oscillator is poised to cross to the upside to generate a cover shorts buy signal or a buy signal in a downtrend.

In this Point and Figure chart of TSN, below, we can see a long column of "O's" from June into July (look for the 6 and 7 on the chart). August shows a recovery rally but the chart is projecting a longer-term downside price target of $42.00. 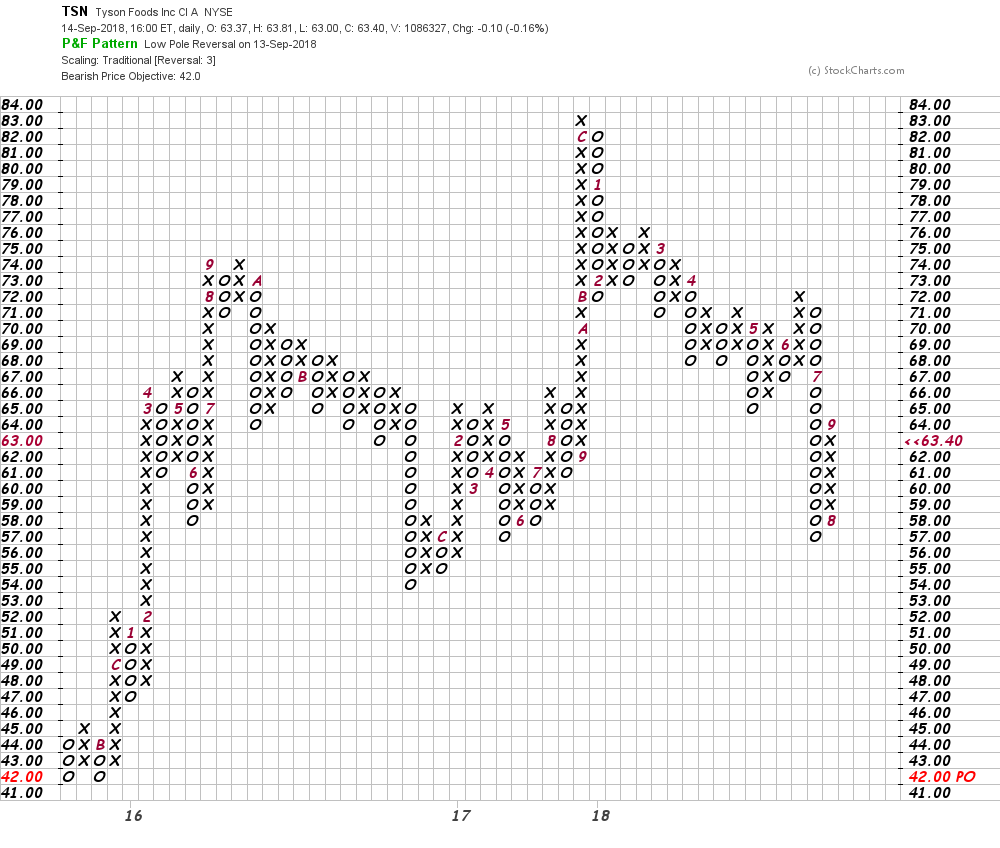 Bottom-line strategy: Our collection of indicators on the daily and weekly charts above suggest that the longer-term trend is still down and that prices have only bounced and not made a lasting reversal. The $64-$66 area should operate as resistance. TSN is not going to become a trade from the long side until we see signs of aggressive and sustained buying.