What is the purpose of marking time? As 17-year-olds, we were told that the purpose was to get your cover and alignment right. In other words, to make sure that you were in the right spot, so that on parade before the public, you might not stick out like a sore thumb.

This is exactly what you are seeing across financial markets right now. Why? Simply because everyone involved is unsure. Unsure whether they should be pricing in either the hopeful resolution to the various trade disputes the U.S. is currently engaged in -- particularly with China. Unsure still over the size and scope of the damage still being done to the Carolinas due to Hurricane Florence, and unsure of just how much upward pressure the Federal Reserve should be putting on interest rates in the wake of what were tremendously positive July revisions to both domestic Retail Sales and Industrial Production.

One might have noticed that even with that upward pressure on rates, the spread between what U.S. two-year paper and U.S. 10-year paper will pay has not really been altered all that much. Those extra eight years will help garner the investor a whopping 21 basis points or so of yield. It does not take too much cognitive ability to figure out why the Financials were the only sector within the S&P 500 to close out last week in the red, despite the 10-year battle with 3% support.

It is said that the Chinese government was working on finalizing plans for senior officials to meet on trade in Washington this week, and set up a visit the very next week by Vice Premier Liu He with U.S. Treasury Secretary Steven Mnuchin. Rumors are that the Trump administration will move ahead with the much-discussed tranche of tariffs on $200 billion worth of Chinese imports. However, the same rumors have it that these tariffs might come down at just 10%, instead of the previously threatened 25%.

By the way, these tariffs -- if implemented -- reach a level that China cannot match dollar for dollar, given the sheer size of the trade imbalance that the nation enjoys versus the U.S. In order to retaliate, China would have to get creative. That would mean some kind of restriction along the lines of equipment sales key to U.S. corporate supply lines.

Almost as if on cue, beleaguered memory chip producer Micron Technology (MU) will report the firm's fourth-quarter performance after Thursday's closing bell. EPS whispers are for a print that might be a couple of pennies below consensus. As important as performance, inventories and pricing might be, as important will be anything that CEO Sanjay Mehrotra might have to say regarding the firm's continued reliance upon China.

News broke on Friday evening that catches one's eye, if one tends to watch the defense and aerospace industries closely. The U.S. Air Force awarded a contract to Lockheed Martin worth a potential $7.2 billion to produce as many as 22 additional GPS III satellites. This is an option-based contract that could be exercised in part or in whole, which would be in addition to the ten satellites of this type that Lockheed is already producing for the Air Force.

These advanced satellites, which will be manufactured in the Denver, Colorado suburb of Littleton, will improve both accuracy for navigational purposes, as well as security against cyber attacks. This new satellite, which is not expected to take the field until 2026, will also emit a signal more compatible with satellites currently used by European nations.

This, at least to this investor, is the deal here. As you all know, the federal government's fiscal year ends within two weeks. For any unspent defense money, this becomes crunch time. In other words, it's use it or lose it.

You kids ever hear of the Air, Space, & Cyber Conference? This aerospace dog and pony show kicks off today and will run through Wednesday at National Harbor, Maryland. The event is hosted by the Air Force Association. Not only will a plethora of high-ranking officers speaks at this event, but you can expect to hear from SpaceX COO Gwynne Shotwell this afternoon, and Blur Origin founder -- and Amazon (AMZN) CEO -- Jeff Bezos on Wednesday afternoon. Both of these appearances are scheduled for 3:40 p.m. ET.

The point that I am trying to make is that if the Air Force is going to throw money around ahead of the close of the fiscal year, this event would make for great theater. The Air Force is thought to have two potential contracts in play at this time. One would be a two-year contract to replace the Atlas 5 rocket now used to launch military payloads. The Atlas 5 is a United Launch Alliance product, which is a joint venture between Lockheed and Boeing (BA) . ULA is still in the running for some business here. Both Space X and Blue Origin are also thought to be contending, as is Northrop Grumman (NOC) .

Then there is the much-bigger potential for some cash flow as the Air Force is expected to at some point in the near future make a move toward replacing it's tired fleet of 38C Talon trainer aircraft. This contract, according to Investors Business Daily, could be worth $16 billion, and involve an order for as many as 350 aircraft. The 38C is a Northrop product. Both Lockheed Martin and Boeing are working on separate competing joint efforts with external firms on designing suitable replacements. This contract has been delayed several times already. According to Inside Defense, this contract will likely be awarded prior to September 30... for real this time. 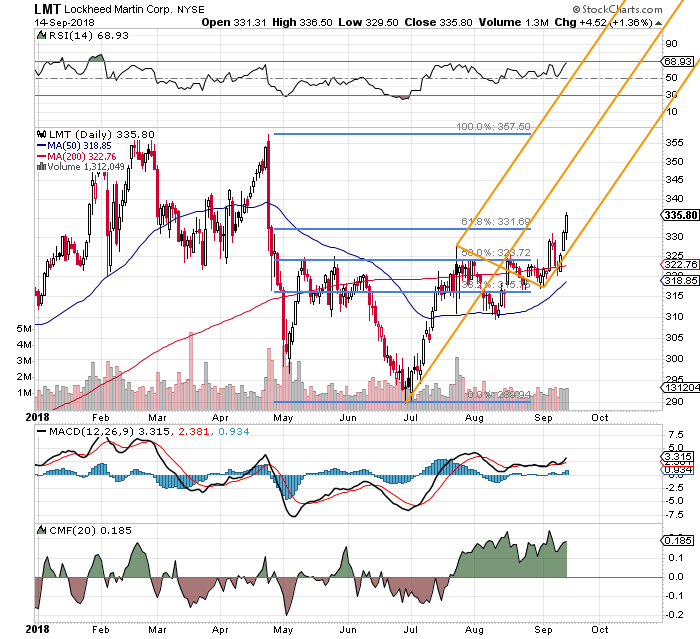 Now that is a chart. One quickly see that this name spiked right through a couple of points of resistance late last week. The daily Moving Average Convergence Divergence looks sharp, with all three components pulling in the same direction. Relative Strength is well... strong, and that Money Flow is just spectacular. As most of you know, I am long this name, and have been quite high on the name of late.

The entire sector has performed much better in recent weeks than it had for quite some time. I have taken some off of several of my names in this group as price has improved -- and for others, target prices have been reached. My target price for LMT ($333) was pierced on Friday. Discipline demands that I take something off -- and so it shall be, but it won't be much. Maybe a 10% scalp.

I like this name, and LMT obviously has the hot hand in the industry right now. For your information, the financial industry's average target price for this name is currently $369.88. Third-quarter earnings are not due until October 23.

Note: I do not find options markets related to LMT especially liquid -- they are not priced to my liking to either take a shot there myself, or lead you, the reader, to believe that doing so would be a good idea. If that changes, I'll be on it. Right now, this is an equity play for me.

Get an email alert each time I write an article for Real Money. Click the "+Follow" next to my byline to this article.
TAGS: Investing | Global Equity | Regulation | Markets | Transportation | Economic Data | Earnings | China | Economy | Newsletter | Politics | Stocks

Don't Get Into Tesla, Unless You Like Driving With Bears

Let's see where this electric vehicle maker is headed.

ChargePoint Stock Needs Its Own Boost

We have a potential downside price target.

Copa Holdings Is Trying for Liftoff

Let's check the flight pattern of this passenger and cargo airline.

Are Shipping Stocks Sailing into View?

The shares of these three dry bulk carriers definitely are worth a look as they appear to be bottoming.

While a short trip ahead may look good, the longer road appears bumpy.